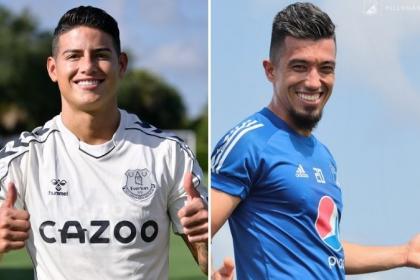 The day is coming! The new 2021 Florida Cup champion will be decided this Sunday afternoon when Everton, led by James Rodríguez, face Millonarios at Camping World Stadium.

The game, which will, of course, be attended by the public, will begin at 5 pm (Colombian time) and will be televised on ESPN.

The ambassador set arrives in the middle of a great nominal mess. The confirmed departure of Fredy Guarín and Juan Camilo Salazar is now joined by the practically defined arrival of Cristian Arango to MLS (Los Angeles FC). Likewise, neither will Emerson Rodríguez due to injury, nor will Breiner Paz, who seems to have his letter of departure ready.

Now, regarding the 24 summoned, there are some new features, mostly young people, such as the inclusion of goalkeeper Camilo Romero, Roberto Rosales (right back), Felipe Banguero (left back), Yuber Quiñones (winger), Jorge Rengifo ( winger) and Ricardo Márquez (forward).

With the above on the table and being aware that it is a friendly tournament, surely Alberto Gamero will try to give the vast majority minutes and could also practice, at some point in the 90 minutes, the line of 3 that he tried with the Pasture, overtake Roman, etc.

The question is precisely who will replace Rodríguez: change Mackalister aside and leave Ruíz on the left, use Guerra / Rengifo on the right, locate another point.

Regarding Everton, without a doubt all the lights point to James Rodríguez. Not only because he was able to complete his preseason without any inconvenience but because it will be the first test of what Rafa Benítez wants with him.

Let us remember that both shared a dressing room at Real Madrid (2015-16 season), curiously after the leadership of Carlo Ancelotti, and that was when the headaches with the Colombian began. Substitution, substitution and more substitution …

On the other hand, it will also be the opportunity for new faces to show their talent. Cases like Andros Townsend, Asmir Begović, Moise Kean or Demarai Gray are proof of this.

As with Millos, Benítez will most likely take the opportunity to give other players like Davies, young Gordon and others minutes.

Lately, the Albiazul team has not done well at all playing against European clubs. In 2013, Porto beat him 4-0 at El Campín; in 2012, the famous 8-0 against Real Madrid and months before fell 1-2, also at home, with Atlético de Radamel Falcao García.

As for duels with each other, this will be the second time that both blue teams have seen each other. The first occurred in July 1954, almost 70 years! In the city of Bogotá. The score was 1-0 in favor of the locals.