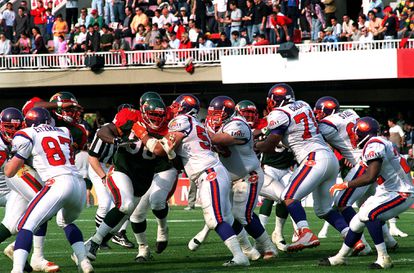 American football has returned to Catalonia. And it seems that now it is back to stay once the managers of the franchises and the organization understand that they have found some keys to settle the show: a great competition that has its main stage in Reus. The capital of the Baix Camp region is where the Barcelona Dragons celebrate their first anniversary after their rebirth. On June 18 they will be able to celebrate it with their fans in the first home match they will play in the European Football League (EFL) at the Estadi Municipal.

The Dragons settled in Reus just over a year ago after reaching an agreement with the City Council for the rental of a stadium that can hold up to 4,200 spectators. The franchise has the equipment and services necessary to carry out its functions and is, moreover, a strategically well-located place because it is close to the airport and the beach, factors that represent an additional tourist attraction for a city that has some 106,000 residents and whose most emblematic sport is roller hockey. The Reus-Dragons association has already renewed its agreement until 2023.

Josep Cuerba, councilor for sports in Reus, confirms that “the impact is very positive”. “Despite the pandemic, many fans already came to the stadium last year and for the current year we expect many more,” he argues. “The impact of the Dragons for the city last year was of the order of 950,000 euros. The average number of spectators exceeded 50% and from the club it is expected that for this second season more than 75% of the capacity will be filled, ”he adds.

Not only is the game played, but the Power Party is lived around the stadium during the day. Families come to enjoy shows, especially musicals, in an attempt to recreate the atmosphere around games and entertainment in the United States.

The current Barcelona Dragons, led by Bart Iaccarino, are different from those of the first stage. “They are not the same as before, but the goal is for them to be the grandchildren of the previous ones. Let them take over” say club sources. That team born in 1990 competed in the World League of American Football, a league organized by the National American Football League (NFL) itself in Europe. In 1997, the Dragons went on to win the championship; now, the starting goal is to qualify for the play off.

The initial League lasted 15 years and disappeared in 2007. Although it was quite successful in Europe and grew the popularity of American football, it never caught on with the American audience. The matches were played mostly in spring, a time of year in which other American competitions are already consolidated. That first approach to the NFL caused losses of approximately 27 million dollars. Rafa Cervera, NFL expert and former collaborator of those Dragons, affirms that it was at that moment when “the NFL realized that to succeed in Europe they needed to bring the best of their projects”.

What affects the most is what happens closest. To not miss anything, subscribe.

The new European Football League aims to start at the roots and promote American football in each country. Bet for a minimum quota of chips: eight for European players, four Americans and the rest must be national players. Nil Baños, the franchise’s press officer, believes that the return of the Dragons is a great incentive for all those who play American football in Spain, even more so if one takes into account that “all the players on the squad are considered professionals and they charge by contract within a few forks”. The next phase is to work the quarry in venues such as Reus.

The television audience for American football increases to the point that in the 2021 Superbowl, it broke records and was 71% more than that of 2020 and 181% more than that of 2018. EFL games are televised by Esport3. And for the future, the arrival of the Chicago Bears and the Miami Dolphins is announced, who await the possibility of making their debut in the new Santiago Bernabeu stadium and in the Espai Barça. The first touchdown, in any case, it has been in Reus.

American football is reborn in Reus