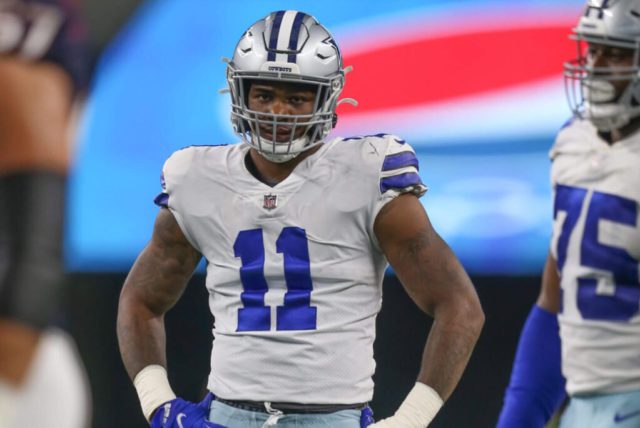 Micah Parsons continues to receive praise and comparisons in his first year in the NFL. Following his strong performance against Washington in Week 12, the young linebacker is close to breaking another rookie record in the league. Besides, many are comparing him to legendary linebacker Lawrence Taylor. And this is because Parsons could emulate one of his achievements.

Right now, Micah Parsons is a clear favorite to win the Defensive Rookie of the Year award. And not only that. The first-round pick is also considered a candidate for Defensive Player of the Year. If he won both awards, he would be the second player in NFL history to do so. And the first was Lawrence Taylor, in the 1981 season.

Beyond the possible feat, several reporters and analysts are comparing Parsons to Taylor. The Dallas rookie is aware of those comparisons, and while flattered, he believes the time isn’t right yet.

“It’s definitely too early (for those comparisons)”Parsons told reporters Wednesday. “I can see the similarities, but LT was completely different. It’s an honor that people are doing that. But being compared to a Hall of Famer so soon… I’m not ready to be in that conversation yet. “.

Micah Parsons on people comparing him to Lawrence Taylor: “It’s an honor. I’m just not ready to be in that conversation. I got a long way to go. ” Parsons is hoping to one day meet LT pic.twitter.com/z01uQymi6S

Lawrence Taylor is considered an NFL legend at linebacker. Arrived at the Giants as the second overall pick in the 1981 Draft, he played there his entire career until 1993. “LT,” as he is known, won two Super Bowls with the New York team. In addition, he was selected 10 times for the Pro Bowl and 8 times for the First Team All Pro. Among other individual awards, Taylor was MVP in 1986, Defensive Rookie of the Year in 1981 and Defensive Player of the Year three times.

Stat-wise, Taylor was a real threat to opposing quarterbacks. After his thirteen-year career, the linebacker recorded 142 sacks and 9 interceptions, among other records. In his rookie year (1981) he hit 9.5 sacks, a mark Parsons already broke. Meanwhile, LT’s best record was his 20.5 sacks in 1986. This earned him to be chosen as NFL MVP that season.

From these numbers and more, Micah Parsons knows that he is still a long way from what Taylor achieved. However, you are willing to work to get to those records.

“It’s a long way to go”Parsons said Wednesday. “He had 142 (sacks), so I have to do 130 more before we start saying, ‘Yeah, he beat LT.’ We are going to calm down and continue enjoying the work I have to keep doing to get there ”.

Micah Parsons on Lawrence Taylor comparisons: “I still have a long way to go. He had 142 (sacks). I have 130 more sacks to go before we can start saying that was LT So let’s just chill and keep enjoying the work I got to keep putting in to get there. “

During an interview published earlier this week in Sports Illustrated, Micah Parsons revealed that Lawrence Taylor is one of his role models. However, the Penn State product wants to stay focused to reach a level close to that of the Hall of Famer.

“Yeah LT was a killer man”Parsons told Albert Breer from Sports Illustrated. “I love watching him. (…) And yes, (being Defensive Player of the Year) comes to mind. But I always stay humble and down to earth. I’ll just let that get to me. I have to keep doing what I do and focus on what is in front of me. “

While the comparisons between Micah Parsons and Lawrence Taylor continue (and will continue), the Dallas rookie wants to make his own name in the NFL.

“I think LT is one of the best pass-rushers of all time, but I want to be my own person.”Parsons told reporters Wednesday. “My own man. I want people to say ‘you rush passes like Micah’.

Forces the fumble that’s returned for a Cowboys TD 💪

Parsons is certainly forging his own name. So far in his first NFL season, the rookie has impressive records: 12 sacks, 27 hits to the quarterback, 75 combined tackles, 17 tackles for loss of yards, two passes defended and three forced fumbles.

Plus, Penn State’s product is just 2.5 sacks away from breaking the record for a rookie in the NFL. That record is held by Jevon Kearse, who had 14.5 sacks playing for the Tennessee Titans in the 1999 season.

Comparisons aside, Micah Parsons has the clear potential not only to break Kearse’s record, but also to emulate what Lawrence Taylor accomplished. The next games will determine if the rookie will reach those milestones. Either way, Parsons could become one of the big names in the NFL for years to come. And the Cowboys can feel lucky to have him on their team.

According to Micah Parsons, it is too early to compare it to a legend of