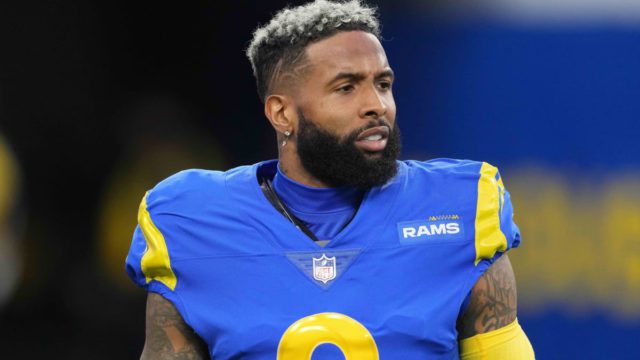 After the failed trade for Brandin Cooks this week, Odell Beckham Jr. still sounds like the Cowboys’ top target to bolster their receiving corps. It is well known that the former Rams and Giants is wanted by several teams at the moment. Nevertheless, former wide receiver Michael Irvin said a few days ago based on “personal knowledge” that OBJ would like to play for Dallas.

Now, according to a new report, it seems that the interest is reciprocal.

This Sunday morning it became known, according to close sources, that the Cowboys have Beckham on their radar. This was reported by Ian Rapoport and Mike Garafolo of NFL Network. According to reporters, Dallas is expected to be in the “fight” to sign the player as soon as he completes his recovery from the knee injury he suffered during the Super Bowl.

the #Cowboys have WR Odell Beckham Jr in their sights, sources say.

After attempting to acquire a speedy WR before the trade deadline, Dallas turns its focus to the top FA available. Story from me and @MikeGarafolo: https://t.co/xnGJJqpTBz

In their report, Rapoport and Garafolo indicate that the Cowboys’ leadership has not entered into discussions with Beckham’s agent. However, the team remains informed about the physical condition of the receiver, as well as the progress in his recovery process.

Although Odell Beckham Jr. was aiming to return to action in November, everything indicates that he will play again in December. If so, OBJ could be a luxury addition to any potential Super Bowl contender. Therefore, it is not surprising that there are several teams interested in their services.

Right now, the Bills sound like the best positioned to sign the wide receiver. Likewise, teams like the Packers, Chiefs, 49ers, Rams and even the Giants have OBJ on their radar as well. Now, after this report on the NFL Network, the Cowboys enter the list of possible destinations.

Is OBJ the reinforcement the Cowboys need?

Beyond the front office’s confidence in their current receiving corps, the Cowboys need an impact player in that unit. In fact, Odell Beckham Jr. could fit that profile, especially if the team aspires to go as far as possible.

Since arriving in the NFL in 2014, OBJ has been an impact contributor to the teams he has played for. This receiver has exceeded 1,000 receiving yards in six of his eight professional seasons. The only exceptions for him were in 2017, due to injury, and in 2021 due to differences that led to his departure from the Browns midway through the season.

OBJ’s stats with the @RamsNFL:

However, it was just the 2021 season that showed how Beckham can enhance the offensive game of a contending team. The arrival of OBJ to the Rams was key for the team led by Sean McVay to reach the Super Bowl and win it by beating the Bengals. This is indicated by his 27 receptions for 305 yards and five touchdowns in the regular season, in addition to the 21 receptions for 288 yards and two touchdowns in the playoffs.

From Jerry Jones’s side, we already know what his feelings are regarding OBJ. During a radio interview last week, the Cowboys’ owner and general manager said he admires the veteran receiver. However, admiration may not be enough to reach agreement.

Could the #DallasCowboys be one of the teams in the mix for Odell Beckham Jr.? 🤔

When asked about OBJ, Cowboys owner Jerry Jones made his feelings clear about the veteran wide receiver: https://t.co/y0X3kvAyez pic.twitter.com/4ASPi4hhRb

On paper, the main obstacle may be Beckham’s aspirations. According to Rapoport and Garafolo’s report, the 30-year-old receiver is looking for a multi-year contract to stabilize himself and bring closure to his professional career. However, this may not fit with the intentions of the Cowboys, who in 2023 could begin negotiating the possible extension of CeeDee Lamb.

As we can see, the possible arrival of Odell Beckham Jr. to the Cowboys will be a topic of conversation in the coming weeks. Only now, according to this NFL Network report, the interest is reciprocal between both parties. It remains to be seen if OBJ finally makes it to Dallas, or if this link to the cowboy team ends up giving him the push to join another team in need of a wide receiver of his caliber.

A report confirms the Cowboys’ interest in Odell Beckham Jr.