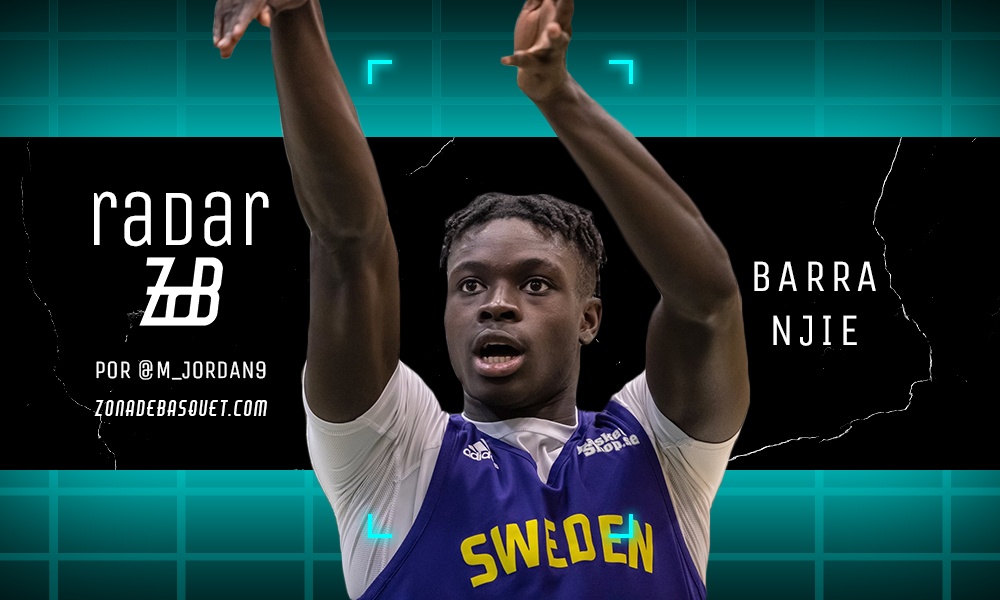 Njie Bar (2001 / 191cm) He is one of the pearls of Swedish basketball and is in fashion after his move to the G-League this season, prelude to the NBA, after a season in which he was proclaimed the best youngster in the Swedish league. But not everything has always been a stellar moment in an irregular career with ups and downs.

Born in Sweden (immigrant parents from Gambia), he was always one of the country’s basketball promises. His physical ability was above the average for his generation and made him stand out from an early age, both in local championships with Fryshuset and in the national team, where he exploded in the 2016 Baltic Cup Cadet. In a strange decision, that summer of 2017 he did not he played the training Europeans for already going to the United States to work. The chosen place was St Benedict’s Prep, a center where there were already other Swedes like the NCAA Ebrima Dibba or the ex-FEB Musa Jeng. He even turned down offers from teams like Real Madrid, as he told Eurospects. There he adapted to American basketball, grew in his physique and accumulated NCAA offers while burning stages, standing out especially in his last year (19/20).

Without really knowing why 20/21 didn’t make it to the NCAA (notes? Personal decision?), there were various announcements on Twitter. On the one hand, an American JUCO announced his incorporation (Palm Beach CC) and, on the other, he signed for an agent, although he was while he was in Germany and training there. Finally, he decided in January to return to playing at home with Fryshuset, a team from the bottom of the Swedish first division (SBL). Njie, with total freedom, literally broke it and played 17 games to go to averages of 17.8 points, 6.2 rebounds and 4.9 assists in 30 minutes on the court, being chosen best rookie of the competition ahead of David Höok (current TAU ​​Castelló).

In the summer, the Swedish national team called him for their training sessions, being the star, along with NCAA Potho, of the U20 that our recently interviewed Boris Balibrea directed. He kept talking about interests from American universities, about offers from Euroleague and ACB teams, but finally his current agent reported that he was going to the G-League draft, where he would be chosen in the 2nd round by the Delaware Blue Coats. However, due to visa problems, he missed the preseason and the first games and was unable to debut until the end of November, making it difficult for him to find continuity (7 pa, 13 mi, 3.6 pt, 2.4 re, 2.4 ace).

After several years playing in the United States at the High School level, last season was the first that we could see Njie in a competitive mid-level league such as the Swedish one. But to be fair, his club, Fryshuset, was from the lower zone, with many games lost by a wide difference and a fair level as a team. His level there was very high and because of his basketball style, the G-League adventure doesn’t seem crazy to me, although it’s having a hard time coming together.

Already ‘one’ compared to when I was young and worked as combo guard, his American stay earned him to continue with his physique, very good for his position. We are talking about a very explosive base in his first step, excellent in the Q&A or in his 1×1 game, with a good ability to penetrate and reach the hoop, absorbing contacts very well. Difficult to stop when facing, with his handling of the ball (with both hands) he draws many personal fouls. Lethal in the open field, both finishing and assisting. He controls the middle distance and can score from three, but he must be more consistent to reach the elite. Back, with his physique, he is a player with a good level of activity, always attentive to the passing lines and intelligent when it comes to stealing balls.

In return, he is still a point guard in development who needs to unite his 1 on 1 point guard or open game concept with a creative point guard who reads what his team needs at all times, without sometimes forcing certain situations (as he does with certain passes ). We have already focused on his outside shot, but also in defense he must maintain concentration throughout the game (as well as assume defensive concepts).

Without many minutes in the G-League, Barra Njie is a point guard who needs to play and burn stages. Seeing the example of Clarance in Sweden itself, he should guide his career towards a competitive league such as LEB Oro, BNXT or Germany, with a coach who takes advantage of his virtues and a team in which he can polish his defects and go acquiring that competitive experience that in a certain way is lacking.