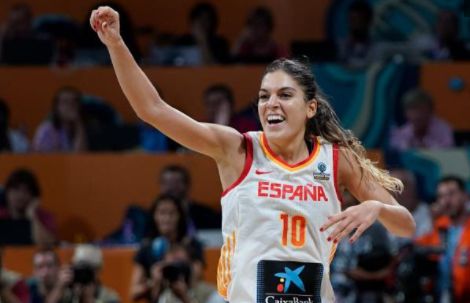 The former basketball player from Girona Marta Xargay has revealed in an interview with El País that he suffered from bulimia (eating disorders of eating) and orthorexia (a psychiatric disorder that becomes obsessive about eating healthy) due to the difficult relationship he had with Lucas Mondelo, dismissed this past Friday as Spanish basketball coach for “the non-achievement of sporting objectives & rdquor ;, according to the federation’s statement.

The complaints of Xargay was to be published before Olympic Games, but the former player agreed to the request of the president of the Federation, Jorge Garbajosa of delaying it so that it did not interfere in the competition, and now once the Olympic event with the elimination of the selection in the quarterfinals is over, his statements have seen the light.

“The moment came when I had to put the person before the athlete. I could not continue to endure unacceptable things. There are limits that must not be crossed and he took me to a very heavy limit. It is hard. I have had many problems with the food because of this person & rdquor ;, assures in conversation with El País, the 30-year-old former international player, who temporarily left basketball in May 2020 to take a period of reflection, but he confirmed his withdrawal on July 15.Xargay, one of the players who has been part of the golden generation of women’s basketball, and was in the Olympic silver in Rio explains that the problems with Mondelo started in their stage in Russia, in the ranks of the Dynamo Kursk, where the L’Hospitalet coach was a coach. We were weighed every week and he was always behind watching everything. There were several situations, in team rallies, in which he approached Sonja petrovic and to me and he told us that we didn’t have dessert because we were fat, “she says. Xargay.

Insecurity as a person

“At that time I weighed 67 kilos, and I am 1.82m tall. I was physically fine, but that made me very insecure, on and off the track. I was constantly telling myself that I was out of weight. This caused me a physical revolution and mental “, adds the Girona athlete to reveal that she became obsessed with the issue of food and was diagnosed with bulimia and orthorexia.

“I tell it because I think I can help many girls who are going through the same thing. We are all vulnerable, but it can be overcome,” she says. Xargay, which is not the only one of that great generation of players who hinted at problems with Mondelo. Also the badalonesa Anna Cruz He announced that he was putting an end to his relationship with the national team and did so by publishing a harsh letter on the networks, in which he revealed that “he found it difficult to continue tolerating acts that went against his principles & rdquor ;.

Xargay also denounces the constant disregard and lack of respect of Mondelo while she was at his command as a player: “He has not known how to control his authority. At no time has he respected me, neither as a player nor as a person. He has had many comments, public and private, attacking me and getting to value my private life and my relationships “