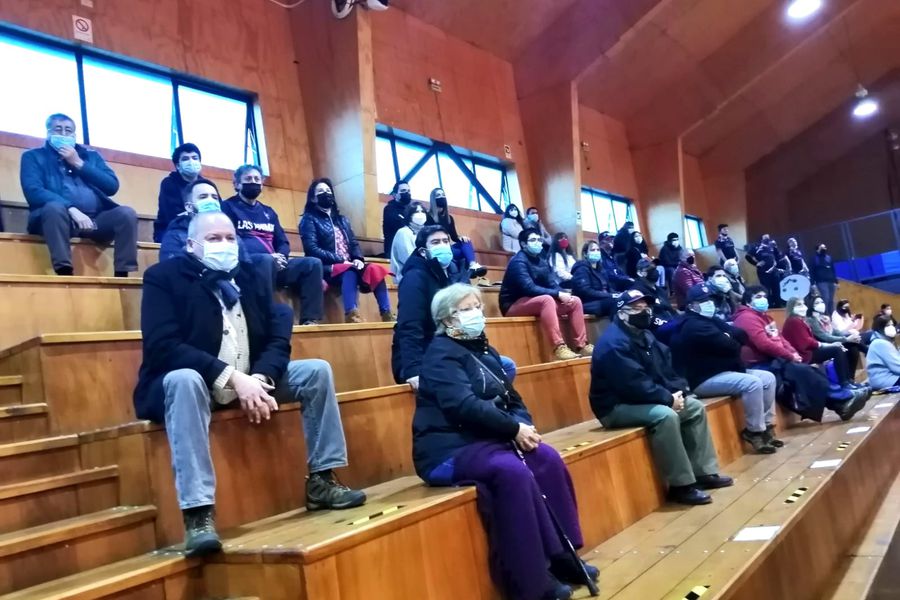 Competitive sport was resumed in Chile quite some time ago. However, although the protagonists returned to the courts, a fundamental ingredient was still missing: the presence of the fans in the stands. In this context, the duel between Las Ánimas and AB Temuco, for the semifinals of the Southern Conference of the National Basketball League, can be considered a milestone. At least, in the context of the pandemic. The meeting, which was played in the gym that bears the same name as the host club, and which is located in the north of Valdivia, was the first to be played with the public in the stands since the coronavirus began to cause ravages the entire world and, by the way, to generate a series of damages in professional sports. Later, Puerto Varas received Valdivia, also with fans present.

It was not, by the way, a day even close to normal. In the stands of the venue in the Los Ríos region there were only about 50 people, slightly less than the authorized capacity for the event: 70 spectators. In the case of Puerto Varas, 250 were allowed. If people were missing, what was left over were precautions. The local club had to have a series of preventive measures to prevent Covid-19 infections. And, above all, to guarantee the viability of the idea of ​​starting to receive fans.

The Ghosts had to operate against time. “On Friday we were notified and we had to accommodate ourselves to comply with what was asked of us. We only enable the galleries ”, explains Claudia Méndez, president of the host club, to Sporting. Neither lack of time nor restrictions discouraged the southern club. “Everything that can be entered is already beneficial. We have not received resources for a year, except for what the sponsors provide us, ”says the leader. In fact, the limited capacity that they were authorized implied to propose the first filter for the entrance of the fans: the tickets cost 15 thousand pesos, a value that will be repeated for the second match, which will be played today, at 8 p.m. “The value has to do with the fact that we need resources to finance what the protocols establish,” he says. The interest in attending the next duels leads the club to analyze the transfer to the Antonio Azurmendy Riveros Coliseum, with greater capacity and space to separate the fans. Tickets had to be sold over the internet. However, due to the urgency, an electronic system was enabled upon entry. One operator was in charge of the team that issued them, and of receiving the money, and another, specifically, of delivering the respective ticket.

The protocol to which Méndez alludes, whose measurements were reviewed by the Carabineros, considers temperature controls when entering the sports complex and alcohol gel dispensers in various sectors of the gym. At the entrance, each viewer had to record their data for the purposes of more efficient traceability. The club also had soap dispensers in all the bathrooms and separate garbage cans for waste of a sanitary nature, such as masks, compared to those of another nature. They all opened with their feet, to minimize the risks.

Within the enclosure, the consumption of food and beverages was expressly prohibited, which will mark a radical change with respect to the behavior that fans usually have in sporting events. The move was well understood by Southerners. “The idea is to avoid taking off the masks,” justifies Méndez.

The preventive measures were permanently remembered. The venue’s announcer and signs and signals located on all surfaces that the fans could access were in charge of keeping them in memory. Four square meters separated one follower from another. “Sit here”, established the poster that demarcated the space in which they could see the meeting. Lines were also laid out to connote danger.

“We are happy, because this is sport. What we regret a little is that there are no children, because parents protect them because they are not vaccinated, ”concludes Méndez, to summarize his evaluation.