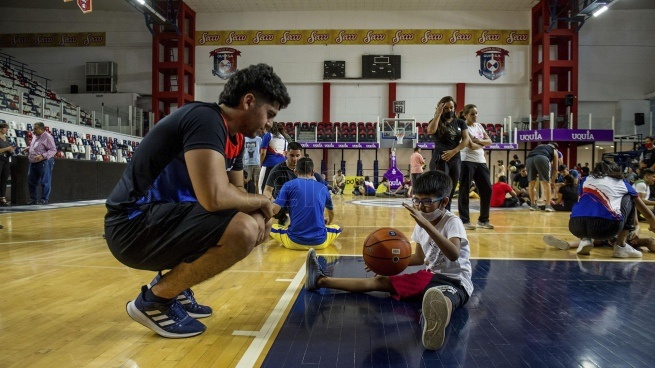 Blind people of various ages participated in the capital of Santiago in a theoretical and practical training to learn basketball given by former player Ricardo Molinari, creator of the “basketball for the blind” discipline.

“It was very exciting to see children and even a 69-year-old woman with visual disabilities practicing adapted basketball,” Molinari told Télam, who was enthusiastic about the wide participation in the training held on Monday and Tuesday.

The training was carried out in the Parque Sur oval of the city of Santiago del Estero and in the Quimsa Athletic Club, aimed at physical education teachers and students, coaches, people with visual disabilities and the general public.

“There is a project to start the procedures to start the work of build a court for the blind inside School No. 50 of Santiago del Esterowhich will be the first to be done within the educational field”, the coach.

“That courts are made in schools is our main objective and that is why we are looking for blind basketball to be an alternative for everyone throughout the country and for more schools to join in creating these adapted courts,” he explained.

One of the most emotional moments of this training was when visually impaired people entered the basketball court, touched the adapted balls and closely followed everything that was explained to them.

Eager, excited and also a little afraid of something new, they ventured onto the court and practiced for up to three hours. The accompaniment of their families was fundamental for the confidence in this new sports alternative.

During the training, authorities from the Santiago Ministry of Education were present, as well as from the Sports Secretariat and the Municipality of the Capital.