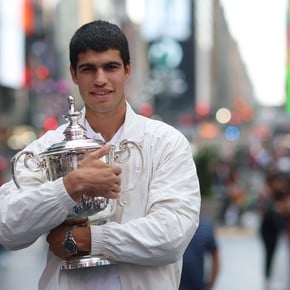 The name of Emanuel Ginobili was one of the most mentioned during the weekend in the field of international sport: his induction into the Hall of Fame It was a historic milestone for Argentine (and Latin American) basketball. But hours after the ceremony in Springfield, the Bahiense put together a lightning trip with his friends from the Golden Generation to see the final between Carlos Alcaraz (1st) and Casper Ruud (2nd) at the US Open. And in the middle of the match, Manu began to tour the facilities with a luxury guide: Juan Martín Del Potro.

The man from Tandil, who traveled to Flushing Meadows invited by the organization and to be a commentator for some games for the ESPN network, he met Manu in the middle of the corridors and began exchanging a few words to catch up. “Look how cool this guy is. What are you doing Delpo for so long?”, began Manu to break the ice and Delpo took the opportunity to congratulate him on the achievement of the Hall of Fame.

“My body trembles when I’m herebut well”, added the former tennis player, who left the activity in February, but who still dreams of having a Last Dance. With a miraculous recovery in his right knee that allows him to play again. “I arrived five, six days ago, I commented the games, it was good, I can contribute something more as a player, but I come here and I feel like going in and racking up a couple of drives“He stated on the verge of emotion.

Del Potro was at the US Open all week.

Later, Delpo confessed to Manu that he was not training or playing amateurishly with friends. “I think I can play with you (laughs). The truth is that no, I’m not training at first I said that I was going to stay, but training without a goal is impossible, my routine is a daily walk like the old ones”, he assured. A few minutes later, he took the opportunity to show Ginóbili the list of all the champions and point out his name for the historic 2009 title.

The Golden Generation went to bank Alcaraz at the US Open

Manu traveled to Flushing Meadows with Chapu Nocioni, Luis Scola, Pepe Sánchez, Gabriel Fernández and Fabricio Obertowith whom they made a fleeting trip to the city that never sleeps to enjoy a historic tennis match, another of the sports that the Bahiense enjoys so much, who even stopped by the ESPN booth to comment on the match.

The Golden Generation in a box watching the US Open final. (IG/chapunocioni)

With Oberto as the “in charge” of the trip, the entire group arrived in New York to bank the Spanish tennis player. Yes, Scola, half as a pressure for his friends, said they want the 19-year-old to win. “We are fans of Alcaraz. The Golden Generation is from Alcaraz,” Luifa said. And the Spaniard complied with the request of the Argentine band and became champion in four sets.

Video: Del Potro guided Ginobili at the US Open