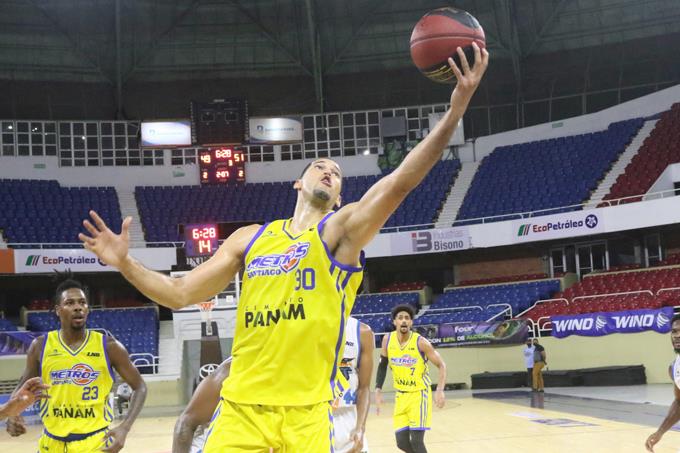 Eloy Vargas and Brandone Francis led the Santiago Metros in a 95-86 victory over the National District Titans, in a match held at the Virgilio Travieso Soto Sports Palace.

Vargas helped the Metros (3-1) with 18 points and 14 rebounds, while Francis contributed 17 points, 4 boards and 3 assists. Robert Glenn finished with 14 points for Santiago, who now have a three-game winning streak.

For the Titans (1-2), Luis David Montero debuted with 16 points, 3 rebounds and 3 assists. Winston Sheppard added another 16 in scoring and Tulio Da Silva 15.

Montero was the difference for the Titans in the first quarter, which finished 24-17 in favor of the celestial ones. Attacking mostly the rim, “Pinguilin” got 8 points, shot 5-4 from the field and gave 2 assists in 8:18 minutes.

Titans were up 9 (29-20) with a triple by Jayvian de la Cruz with 8:52. From then on the Metros played better, relying on the contribution of substitute Francis. Vargas tied the game at 39 with a free kick with 1:16 and in the last second Adris de León nailed a triple that left the half 42-39 in favor of Santiago’s team.

Vargas, with 9 points and 5 rebounds, was the best for the Metros in the first 20 minutes. Francis and Glenn scored 7 units each. Montero, Richard Bautista and Sheppard led the Titans with 8 points each.

In the third period, a donqueo of Nehemías Morillo with 8:29 raised to 8 (49-41) the difference for the visitors. The Titans came close by 4 (61-65) with a donqueo of Da Silva, but the Metros resisted they finished in front 68-63 after 30 minutes of action.

The Royals of La Vega will visit the Indians of San Francisco de Macorís at 7:00 at night at Mario Ortega, while at 9:00 the Suns of Santo Domingo Este will receive the Titans at the Invivienda sports center.