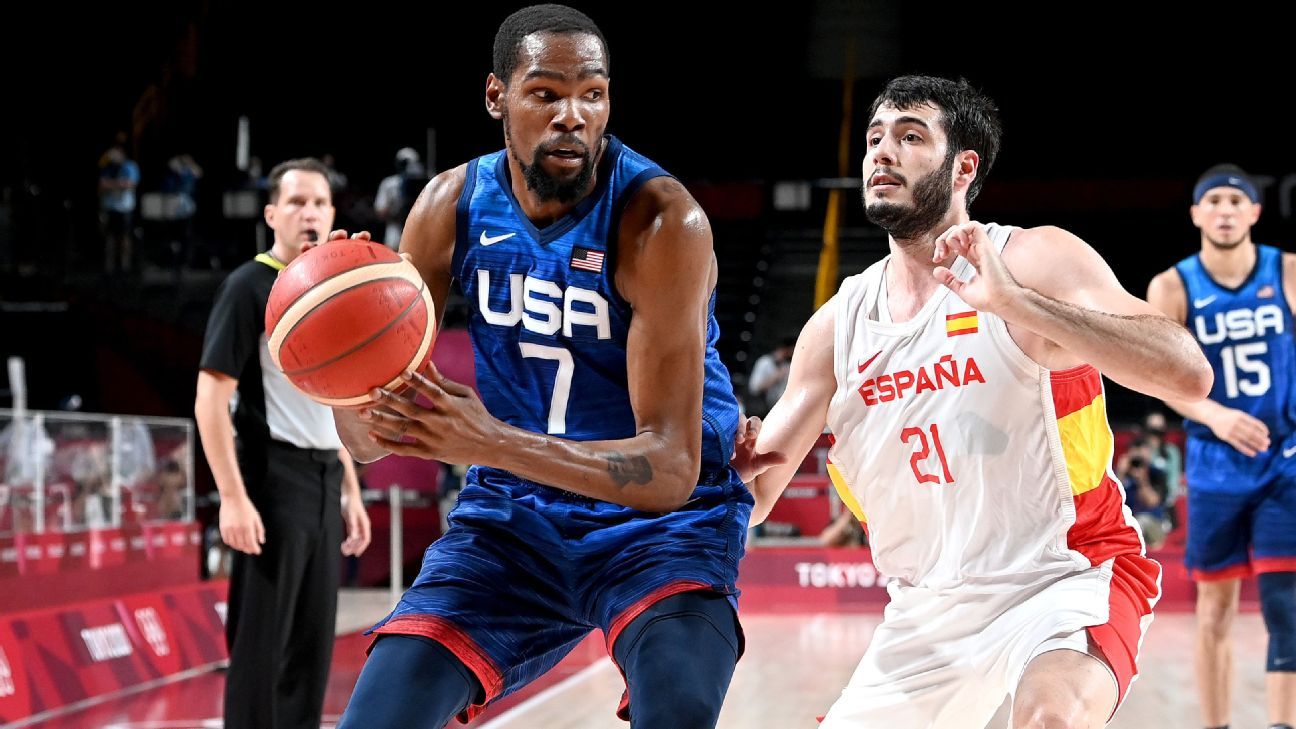 SAITAMA, Japan – An exchange of blows in the center of the ring. On the one hand, the United States Olympic champions, and on the other the Spanish, current world champions.

The difference? Americans have Kevin Durant.

He has never been to an Olympic Games where he has not been to the top of the podium and, of course, he does not intend to change his plans now. Durant scored 29 points to keep his hope of a third Olympic gold alive, and the United States headed for the medal table with a 95-81 win over Spain on Tuesday night in the Tokyo 2020 quarter-finals.

“All we have to do is run our game,” Durant said. “That’s what we’re supposed to be for. It’s about getting the gold.”

Jayson tatum he made 13 points and Jrue Holiday added 12 for the United States, who will meet the winner of the Australia-Argentina cross on Thursday. The Americans were also given the opportunity to extend a unique streak in Olympic basketball history: In their previous 18 appearances in the men’s tournament, they have returned home with a medal.

Ricky Rubio he was brilliant for Spain with 38 points, while Sergio Rodríguez added 16.

It was not easy, it rarely is, against Spain. It was the fifth time both teams have met in the knockout round of an Olympic tournament since 2004: The United States went 5-0 in those games, but the margin of victory in those games is low, according to the United States Olympic Standards: 9.2 points.

And this time it was no different. Spain took a 10-point lead in the second period, before the United States mounted a 36-10 offense over the next nine minutes to take final control.

“It was a hit on the table,” said Durant. “We didn’t want to go into halftime down by double digits, we couldn’t lag behind this team.”

Spain had won three Olympic medals in a row, claiming silver after falling in the final to the United States in 2008 and 2012, followed by a bronze in 2016, after falling to the Americans in the semi-finals.

And this could well be the last time Spain has some well-known names on its roster; Pau Gasol is 41 years old, and other stars like Marc Gasol and Rudy Fernández are much closer to the end than the beginning.

“I think the time has come for others to be the protagonists,” said Marc Gasol, implying that he played for the last time with Spain, after a game in which he and his brother left without scoring, something inconceivable in the national team “It’s my turn to go out and let the youngest step forward and enjoy themselves.”

Spain slipped to an early seven-point deficit and subsequently did pretty much what they wanted during a 10-minute span in the first half. It was a 29-12 streak that put them ahead 39-29 with 3:25 left in the first half.

During that period, Spain made 13 of 22 field attempts to 5 of 33 by the United States, who missed 12 of their last 13 shots. But when it seemed like the Americans were in trouble, they just got into the groove.

They closed the first half with a 14-4 attack to go 43-43 at halftime, including seven consecutive points in the final 70 seconds.

From that point on, it was a 20 minute game to decide who would go for the medals and who would go home earlier than planned.

The United States was not back down on the scoreboard.

They opened the second half with a 15-4 offense and led up to 16 points before reaching the final quarter leading 69-63.