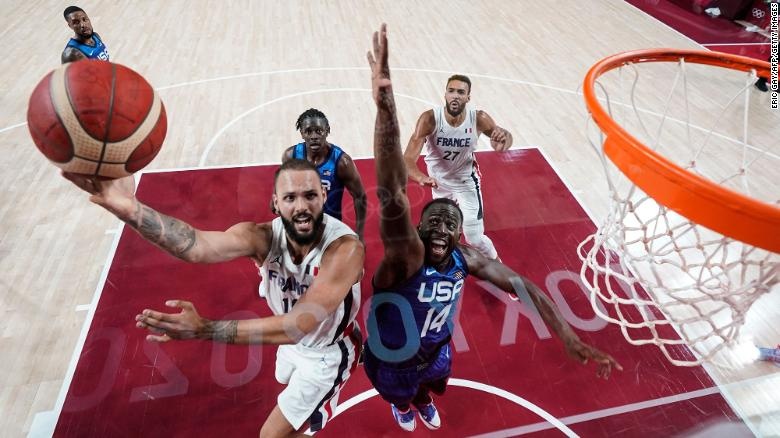 Facundo Campazzo, before making his debut in Tokyo: “It’s what I dreamed of since I was little” 1:15

(CNN) – France beat the US men’s basketball team 83-76 at the Tokyo Olympics on Sunday, ending the US team’s 25-game win streak that stretched back to 2004.

The United States held an eight-point lead with four minutes remaining in the game, but the French team went on a 16-2 streak, highlighting top scorer Evan Fournier’s triple with less than a minute to play to seal the victory. It was the opening match for both teams.

France’s Evan Fournier goes for the basket against American Draymond Green at the Saitama Super Arena in Saitama, Japan on Sunday, July 25.

It is the US team’s first loss since losing to Argentina at the 2004 Summer Games in Athens.

United States head coach Gregg Popovich said he was “disappointed” by the loss, but not necessarily surprised.

“When you lose a match, you are not surprised, but disappointed. I don’t understand the word surprise. That’s kind of a disdain for the French team, so to speak, as if we were supposed to beat them by 30 or something like that,” Popovich said .

The United States is the most successful nation in men’s Olympic basketball, having won all but four gold medals since basketball was introduced as a sport at the Olympic Games in 1936.

However, the Americans stumbled on their way to the Tokyo Olympics and lost two of their exhibition matches before Sunday’s loss, and have now lost three of their last four games.

“We have to be more consistent. We had two nine-point leads and a 10-point lead, and then an eight-point lead at the end of the game, and we gave up all of them due to lack of consistent defense, too many mistakes,” Popovich said. “We had, on offense, innocuous possessions in which we did not move and we decided the shots badly. Then you understand it, you look at it, and you put yourself to work and try to improve.”

Despite achieving the surprise victory, French center Rudy Gobert said: “I mean it’s great, but until we have what we want to have around our necks, it doesn’t really matter.” Gobert finished with 14 points and nine rebounds.

Fournier, who scored 28 points, expressed a similar sentiment, saying: “It’s a great win for us, obviously, but we have to go ahead and show people at home that these guys can be beaten.”

“With the right coach, the right mindset, the right job, you can compete against anyone, and not because we are a small country should we have complexes. We are as big as anyone, you just have to believe,” Fournier said.

Both teams return to the court on Wednesday. The United States will play against Iran and the French team will face the Czech Republic.