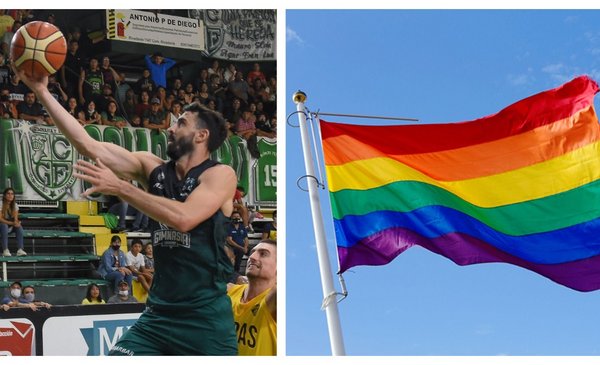 A new case of homophobia hits national sport hard. Last Friday, February 18 at the National League of Basketball of our country, Sebastian Vegaeaves of Gymnastics and Fencing of Comodoro Rivadaviasuffered discrimination from several fans of Quimsa of Santiago del Estero during one of the quarters of the meeting. Hours later He thanked all those who banked him on social networks at this time.

A few minutes from the close of the third period The insults to the athlete began when his coach made the decision to replace him. The match was stopped for 10 minutes, after Vegaangry, He exploded with anger at the situation. Your partner Diego Romero contained it so that the problem does not go to greater. hours later, both Quimsa as the sports authorities launched their respective releases.

“After what happened yesterday, far from feeling disappointed, I feel very happy. The support was felt and that speaks of we are not the same as beforeWe are better people. Thank you for the respect and for so much affection on the part of everyone; leaders and fans, thank you“, he wrote on his account Twitter@_SebaVega. The publication exceeded 2000 likes, 200 retweets and 50 comments support.

In dialogue with TelamVega He said: “It’s not the first time it’s happened to me, unfortunately one gets used to it sometimes. This time I said ‘enough’ and I thank the referees who quickly stopped the game, to my colleagues and I think that the next time the people themselves are going to be the ones to stop. What I want to say to everyone is that I am very well, violence is not answered with violence but with education. Those four who insulted me are not the generality.”

The local institution in said meeting issued a statement on the occasion of repudiation to what happened: “The HCD of the Quimsa Athletic Associationrejects the unfortunate behavior of some misfits who last night during the third quarter of the match, they disturbed player Sebastián Vega with their chants. This institution repudiates and does not share this attitude, which has nothing to do with the club’s thinking towards one of the most remembered players and appreciated that they wore our jersey and that they led our club to the title of National League Champion“.

For its part, Gerardo Montenegropresident of the Association of Basketball Clubs was also against the fact: “Since the adc We express our rejection of what happened. Our statute was designed with the goal of having zero tolerance for discrimination of any type. This way, the club will be fined for the events that occurred and the people involved they will not be able to re-enter the stadium“.

Unfortunate homophobic discrimination against a basketball player in the middle of a game: “I said enough”