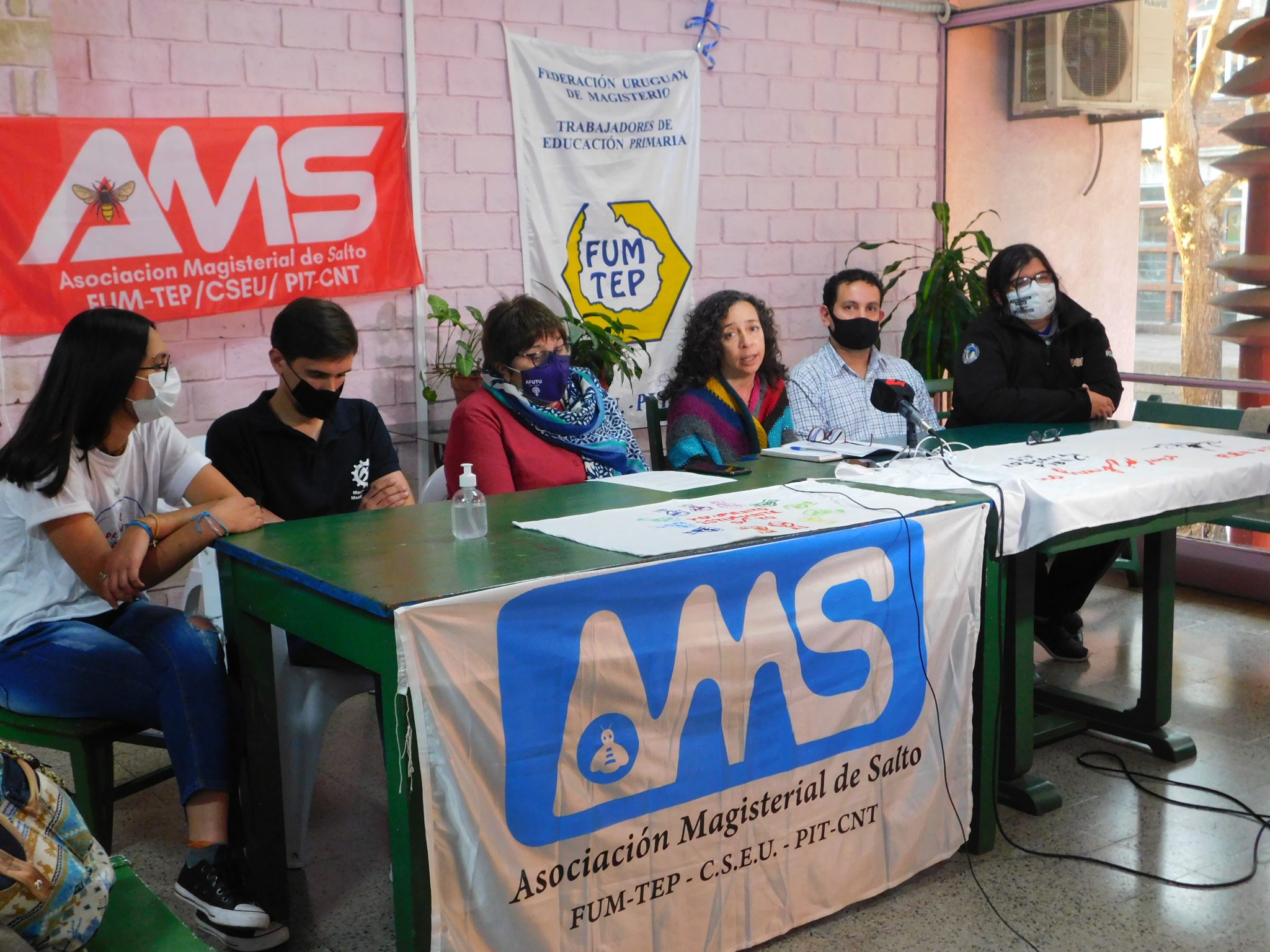 By Andrés Ferreira.
A press conference was held at the premises of the Salto Magisterial Association, communicating the reasons for the strike that will take place in education tomorrow, Wednesday 18. CHANGE collected information.
LOSSES IN WAGES AND RESOURCES
As reported by the different people representing various types of education, primary, secondary and tertiary, the unemployment is due to the fact that the amounts allocated to education in accountability are far from those necessary. “There are losses in salaries, in resources, in short, it is what is needed to support students after this pandemic, there are many elements that make us resolve for the whole country, a national paralysis within the framework of the Coordinator of Teaching Unions ”they stated.
“NEOLIBERAL SOCIETY PROJECT”
“There are cuts in the budget for education, in addition to the implementation of what is the Urgent Consideration Law, this is a project of a neoliberal society, which implies that the State is withdrawing, and when withdrawing not only there is a budget cut, but there is also a separation of the teaching body ”, they affirmed. “Cuts of forty thousand hours a week have been confirmed, that implies 160,000 hours per month that were cut, more than a million hours a year, which clearly implies a setback and loss of educational quality of teaching and learning processes,” This seriously harms public education and those who are the most vulnerable, children and adolescents ”they added.
URUGUAY AND COLÓN
Tomorrow, Wednesday 18, at 10:30 am, they will demonstrate on Uruguay street corner Colón, and they invite all those who want to participate. The purpose of it, as well as the strike, as indicated, is to try to make the teacher’s voice heard and change the course of the path that is being taken a little. “We adopt this measure because we cannot stand with our arms crossed, this is a radical change in salary and working conditions for education workers, there is a denigration in public education that we defend so much, we are doomed to this fight, let’s go to make visible what is happening, all the transformations that are being carried out are without consultation, without participation, behind the back of the education workers, they do not take us into account, this is a return to the 90’s ”they pointed out.
WILL NOT RECEIVE FOOD
When the referents of this announced mobilization for food for children were consulted on the day of the strike, they reported that the children will not receive it. “There was never food when the strike was made, over the years when it was stopped, the children did not receive food, as well as in July holidays, in September holidays, in any recess, the dining room is a part, an element that although all teachers find that it is very good because the children must be fed in order to serve better, it is not the role of the teacher, the Uruguayan Federation of Teaching made a proposal last Friday to the General Directorate of Initial and Primary Education that It was that on that day of unemployment, the food was fulfilled, because we know that the social situation is different, in other years it was not necessary but at this time, the General Directorate and the ANEP said no, therefore, at this time there will be no food, as throughout history there never was ”they concluded.