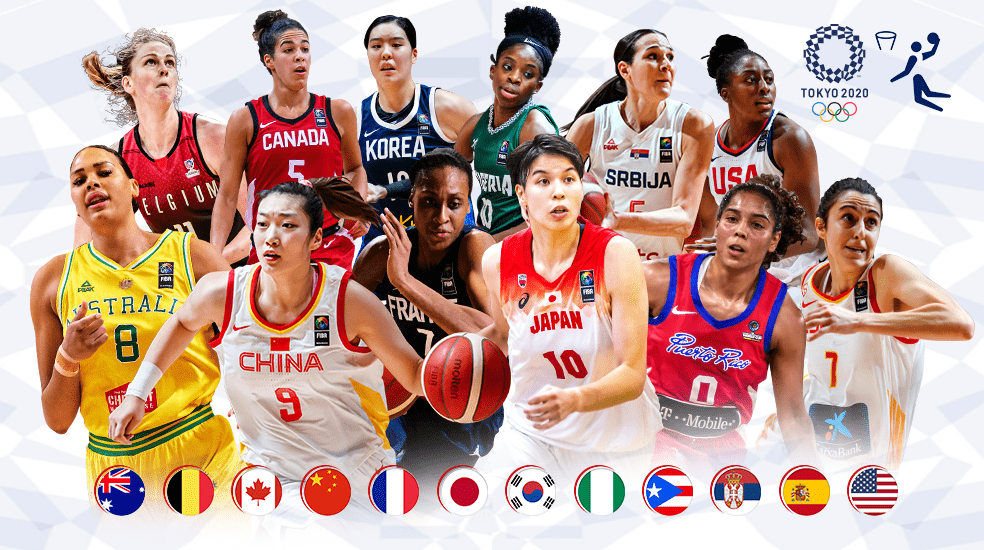 Finally, a year late, the Tokyo 2020 Olympic Games will be held and basketball will be part of the agendas of the millions of spectators who will enjoy the great sporting event. Women’s basketball will start its medal tournament next Monday July 26, and he will do it with him debut of the Spanish team against Korea, at 10 am (local time, 3:00 Spanish time) in which will be the opening match.

Those of Lucas Mondelo have an opportunity to make up for the Eurobasket one month after. Although they will not have it easy at all, because in their own group they have the current European champions, Serbia. Likewise, the Spanish women are among the favorites to take into account when fighting for the medals, along with teams such as USA, Australia, France, Canada or Belgium.

We analyze the different groups that will face each other in the Japanese city, and the group that will take Spain to defend that silver medal that was achieved in the 2016 Rio Olympics.

Group A: Spain against Serbia and Canada as hard obstacles

Spain has been framed in the group that begins the Olympic competition. Those of Mondelo begin with what, a priori, is the weakest group, Korea. Because together with the Asian team it has the recent European champion, Serbia, and Canada, another of the favorites to go far. The Spanish women have the mission of defending the money obtained in Rio 2016, a mission that will not be easy but they are willing to achieve.

Lucas Mondelo trusts almost the same players who played in Eurobasket 2021. Recover Tamara Abalde and Alba Torrens, who missed the European appointment due to positives for Covid-19 and leaves as discard Laura Quevedo and Paula Ginzo, who have played both friendlies against France (they won the first, held in Malaga (72-61) and the one in Paris lost (80-75)).

The Spain roster for the Tokyo 2020 Games it looks like this:

In front they will have two teams that also aspire to medals in these games. The first one is Serbia, current European champion and who did not lose a single match in her competition in Valencia. Your MVP, Sonja vasic, will carry the flag of his country at the opening ceremony of the games, and arrives in great shape. The Serbs come to defend the bronze obtained in the previous Olympics and they arrive as one of the favorites to be on the final podium. On the other hand, it is Canada. A team that occupies the fourth position in the FIBA ​​ranking but is not at its best. She has some casualties in these games and also did not do very well in the AmeriCup, in which she was fourth and did not give good signals. We will see what they are capable of, because they also have a great squad. Korea she is finally left as the “Cinderella” of this group, and it will be difficult for her to go to the group stage. Their last good tournament was at the 2010 World Cup, but they arrive in Tokyo with nothing to lose and much to gain.

Group B: the group of the big favorite, USA

Group B is headed by the big favorites, United States, current world champions and Olympic champions. The Americans have some sensitive casualties, and come to Tokyo with a “second team”, but still with great players like Diana Taurasi, Breanna Stewart or Sue Bird. A squad that aspires to repeat the gold achieved in Rio 2016. As the most complicated rival, it is presented France, runner-up in Europe, but who again stumbles in the final of a big tournament and this has raised doubts about the mental state of the squad. Likewise, France is capable of opting for the medals, as they already did with silver obtained in London 2012.

In addition to the USA and France, Japan and Nigeria they complete group B. The locals had a good Olympic qualifying tournament, but nevertheless they arrive in Tokyo 2020 this year without their big star Ramu Tokashiki, which reduces their chances. Still, the Japanese showed that they are capable of offering an interesting game, although they will not have the support of their audience, which would have been a good plus. Finally, Nigeria is the team with the fewest options left, but one that must be taken into account for its good Olympic tournament and because they are the African champions.

Group C: the group without a clear favorite?

Group C can be seen as the most competitive of all in these Olympic Games of Tokyo 2020. And it is not for less, because they have been framed selections that opt ​​for a medal as they are Australia, China and Belgium. Already among these three teams it is difficult to choose a favorite to first group, with what you can already see the level of these teams. If we have to keep one, Australia takes more ballots, for its good role in the last World Cup, although finally it will not have its star, Liz cambage, but with a very complete roster. And as if that were not enough, Australia has been a medalist five times, all of them consecutive from 1996 to 2012, so they have plenty of Olympic experience.

China They arrive as one of those “covered” teams, but they have already shown what they are capable of by going undefeated in the Olympic qualifying tournament in Belgrade. The Chinese team wants to win an Olympic medal again, as it did in Barcelona 1992, and for this they have a young group accompanied by experienced players. BelgiumHowever, it is not far behind. They come from doing a good Eurobasket 2021, staying at the gates of the final, but with a bronze that tasted good. The Europeans are going to play their first Olympic Games and they will do so with outstanding players such as Emma Meesseman and Jullie Allemand. Before this panorama, Puerto Rico doesn’t seem to have much to do. However, the Americans are a young team and they are going to live the Olympic dream for the first time and as one of their greatest achievements. A selection that smells of the future.