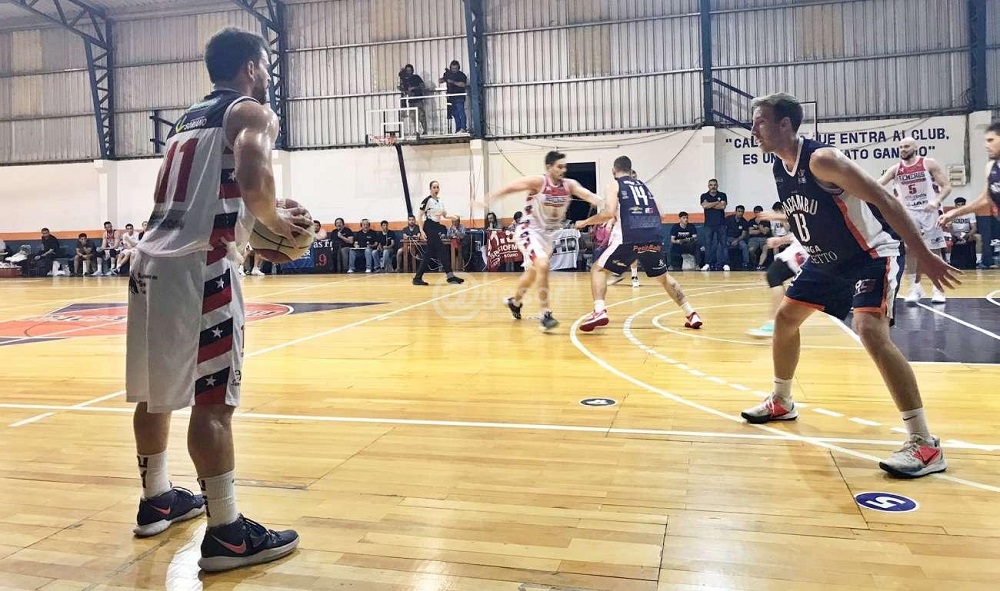 Last Monday the second date of the Soriano Regional Basketball League began with two games and continued throughout the week. At the moment there are three undefeated teams: Prague, Rowers and Sandú.

In one of the most intense and even matches to date, Sandú beat Bella Vista 70-67 at home in a match not suitable for the heart rate.

After the Básquet Total match he chatted with Nicolás Köster: “It was an even game where both teams had a hard time getting into the rhythm of the game and proposing intensity especially to us who are intense, we had a balance of two injuries but in the second half the ring was opened, we were able to run more, the game had a constant and we dominated the table with Rogelio De León. Even so, it was a close finish that we won with a triple by Germán Romero on the finish that left us two positions up and we were able to move forward ”.

In the “Founding Partners” of Fray Bentos, Anastasia beat Esparta 96-51, although the start was not positive for the funeral. In the first ten minutes of basketball, Sparta started better with a 13-9 but quickly in the second Anastasia was up 40-39 and practically from there she put her foot on the accelerator so as not to lose more.

After the Básquet Total match, he chatted with Valentín López, Anastasia’s figure: “It was an open game except for the first quarter and it was an accessible game for us that we knew we were playing against a direct rival. We were intense in defense which allowed us to run the court, that was what we did best during the 40 minutes and it led us to victory.In turn, we were also relatively good in terms of shooting percentages and they did not have many goal situations in partly because of our good defense and the good transitions from defense – attack ”.

In another game played in the city of Fray Bentos, Nacional fell at home to Prague in a match that always dominated the visitor. The celestial ones always had up in the marker during all the quarters but already in the second they broke the game in their favor. Emiliano González with a triple double was the great figure of the game with 17 points, 11 assists and 15 rebounds. Guillermo Bruni also stood out with 17 points and 15 points from “Tino” Agustín Viotti.

After the Basketball Total meeting he chatted with Martín González who has been a figure in Prague: “It is my first experience at Mercedes and I am really very happy because what I needed at the age of 23 was a larger squad where I could have minutes, something I did not know in Montevideo. It is a beautiful experience, I settled here and I am enjoying it a lot, it is a tremendous club where a nice group was formed with a mix of young people and veterans where Emiliano González, Cristián Mazucchi and Guille Bruni are to name a few. Regarding the game, we had a difficult stop with Nacional who has a great team and we, for some reasons, weren’t training but we showed the human group that was put together and we took the game based on the defense and the scored goals. We played a difficult game and we are fine, we are going to go step by step in search of the championship, knowing that now we are facing two difficult games against Anastasia and Remeros. We have a very competitive squad but we have a lot to improve and we are going to do it step by step as we get more filming ”.

On May 12, Racing lost at home to Independiente in a match that started being even where the academy hurt with Iván Simovic but Independiente began to attack down with Paladino and López, anyway the local closed it better. In the second half, Independiente improved a lot with Facundo Villalba and Giuliano Ferradini, who was the great figure for the victory to be for Rojo.

Just after the match, Basketball Total chatted with “Yulo” Ferradini: “I’m playing for the club of which I am a fan, I was born playing here and then I was elsewhere but now I came back and I feel the shirt; We are three fans of the club. As for this game with Racing, it was against a direct rival that served to measure us where we are, it happened on a heavy field that plays its game and we scored a great point as a visitor. Now we have to become strong at home in these two games that are coming our way ”.

Regarding the objectives of the club, he commented: “The objective of the team is to try to enter the wheel of the top six, hit a hit and that it hurts everyone to play against us, that they are not going to take the points from above. This particular tournament is already giving some hits and although there are two or three teams that have taken off, the others are going to fight to complete the teams that go to the second phase ”.

In a kind of anticipated final, two teams that are possibly in the definition of the championship faced each other: Costers and Gitanos played the best game so far, Pacaembú started better but quickly Facundo Ferreira showed his face for the visit to go up 22-18. In the second quarter both teams alternated at the head of the scoreboard but the visit continued to dominate the actions and went up by 1 point, 37-36.

This parity continued after the long break, the coast extended the difference to two points, 61-58. Later the parity continued and although in the end Remeros won, the Aristimuño – Espinosa duo managed to tie the shares at 78 to go to the extension. In the supplementary rowers he was the most effective and ended up taking the game to continue being one of the undefeated.

After the victory of Remeros, Facundo Ferreira spoke with Básquet Total, “As for the game, it was a game between the two teams that were armed to fight above, we have the base of previous years where we incorporated new players for whom they have left. We had a good preparation with Uruguayan Basketball League teams but it is difficult afterwards to adapt as a team to the middle because it happens that with higher teams you improve as a level and then adapt to other teams is complicated as it cost us to play against Pacaembú on a small court where they They have great interns and there was the key to them that led to the score being even and later we realized that they did a good scouting to us because they knew our game systems and that led to a close match but they are those points that playing well or badly you have to win by a trust issue. Three months ago we started training and we hope that as the tournament passes and with the shooting of matches we will improve, in this past match we were not at the best level but in terms of mood with Pacaembú it is always important to win because it leaves us at the top in the table and we hope to continue like this ”.

Ferreira also referred to why several players opt for the Soriano Regional Basketball League to El Metro or the DTA, “Many of us quit because economically it pays a little – much more than El Metro teams that perhaps bet to go up and have a greater contribution but economically it is stronger here and in terms of competition it grows a lot and there are very good teams that if you put some foreigners compete calmly in El Metro ”.