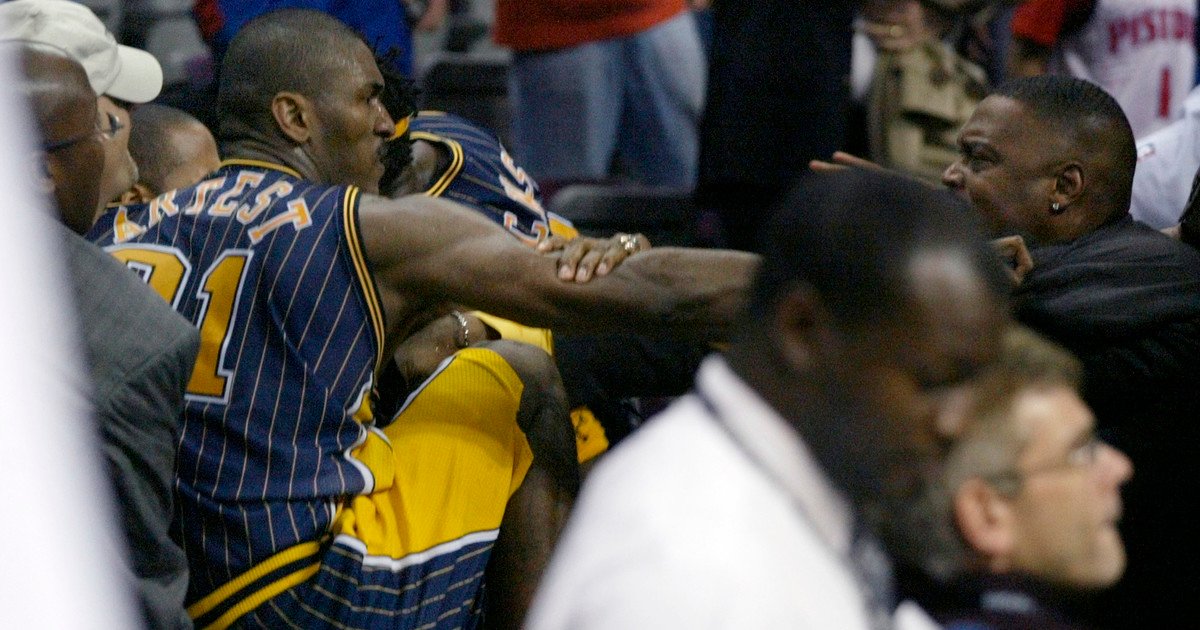 On November 19, 2004 there was an incident between fans and NBA players. The original video was not available to the public ”. Thus, with this hook, begins the new Netflix documentary entitled “Malice at the Palace (Uncovered).” Is about the most violent incidents suffered in the history of the competition, that the streaming platform has testimonies and images never seen before.

Wallace has already pushed Artest to start the problem (AFP).

The name refers to the name that was known to give to the fight, first between Detroit and Indiana players, and then between players from the latter team against Pistons fans at the stadium called Palace of Auburn Hills. The tremendous brawl left a trail of sanctions, grouped in 146 games and $ 11 million in fines; four Indiana players were charged with assault and battery, fined one year of community service; and five Detroit fans were banned from the field for life, while others had to be hospitalized.

It will have five episodes. (Malice at the Palace)

The season had started two days earlier and the match Indiana led 97-82 with 45.9 seconds remaining, all cooked. But there was a fuse that just needed a spark from Detroit’s previous eastern final.

The excuse was a foul from behind by Ron Artest (later called Metta World Peace) against Ben Wallace when he was about to overturn it. The Pistons pivot reacted with an exaggerated push to his rival, which was followed by a general tumult, some wanting to separate, but nothing special in these cases, not a pineapple.

Meanwhile, Artest leaned back on the control table, provoking with his gesture, but without attacking anyone. Until objects and liquid began to fall from the platform (beer more than anything), after which the forward of 2.01 and 118 kilos faced towards the stands and began to swing punches. Stephen Jackson followed suit.

Metta Sandiford Artest, the protagonist of the fight. (Malice at the Palace)

The incident seemed over when Detroit fans -various, drunk- went down to the court to try to attack Artest y Cía. The Indiana players ran to the locker room, bathed in liquid and popcorn.

The one who received the harshest sanction was Artest, punished for the team’s entire remaining season (86 games) and a $ 4,995,000 fine. Wallace, the one who hooked her up the most in Detroit, was punished with six games and $ 400,000.

Those involved in the fight.

In no way are we spoiling the Netflix series, which premiered last Tuesday and will have four more chapters of approximately 1h10 each. The incident will have lasted about 10 minutes, but there are almost 400 documentaries. Naturally, there are unpublished images and statements from those involved, leaders, fans and even police officers who guarded the scene, full.

The Palace (that’s how the stadium was known) was demolished in 2020. Seventeen years later, the story it housed rose in the form of images.

Original images of the tremendous fight