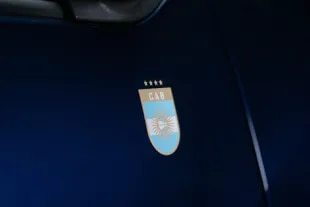 To reaffirm the commitment to basketball and its values, the diamond brand presents a new edition of the limited series Renault Stepway CABthe model that was a bestseller with its first edition released in November 2021.

The new edition of the Renault Stepway maintains the exclusive color Blue Cosmos and the 16 inch diamond wheels. Has the C-Shape LED DRL lights front and rear LEDs, which characterize the intrepid attitude of this Renault model. As a detail, it incorporates an insignia of the Argentine Basketball Confederation on both sides.

The first detail that stands out inside the vehicle are the exclusive upholstery fabric combined with synthetic leather and black details. In the central panel it also presents subtle lines in matching blue, both in the side air vents and in the gear lever. The carpet covers present designs alluding to sports, to reinforce the alliance between Renault and the CAB

The new version of the Stepway CAB Limited Series has a wireless charger Located on the side of the gear lever on the passenger side, suitable for cell phones with inductive charging.

It also incorporates the plug&play alarm, a new bluetooth alarm system that allows you to be linked via a smartphone without the need to carry the key with you, provides the functionality of opening and closing doors remotely, and the silent activation of the alarm. This feature is available for both Android and iOS.

The model already integrates the ESP (Electronic Stability Control) and the HSA (Hill Start Assist)equipment that is added to the media evolution system with 7″ touch screenBluetooth with compatibility with Android Auto and Apple Car Play (to use Spotify, Waze, GoogleMaps among others).

People who purchase the limited series Stepway CAB will receive an exclusive kit that includes:

With a price in force since October, the Renault Stepway CAB limited series (includes exclusive Gift) will have a value of: $4,570,500.

In August 2020, Renault announced its union with the Argentine Basketball Confederation and became the Official Sponsor of the Senior Men’s and Women’s National Team.

Basketball is a discipline that transmits values ​​with which Renault, and particularly STEPWAY, feel fully identified; such as unity and teamwork, effort and dedication, collective commitment, discipline, resilience and the desire for permanent improvement. Basketball has become a sport whose practice has grown exponentially in recent years, in every corner of the country, with countless followers and fans who follow it every day.

The new Limited Series will be available through store.renault.com.arthe official Renault e-commerce channel

Content LAB is LA NACION’s ideas and content generation unit for brands with distribution on its digital platforms and social networks. This content was produced for an advertiser and published by the Content LAB. The writing of LA NACION was not involved in the generation of this content.

The vehicle designed for basketball fans