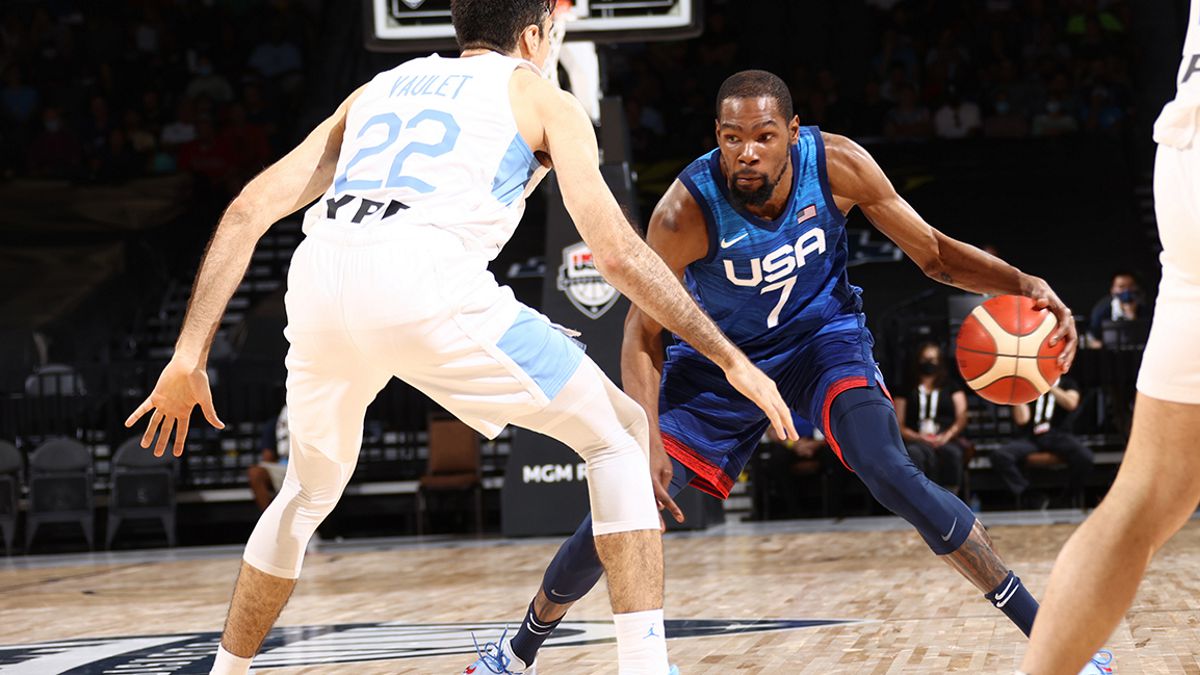 The friendly match between the United States and Argentina, corresponding to the preparation for the Olympic Games that is taking place in Las Vegas, was the least similar to a friendly in the North American country. After losing to Nigeria and Australia, a third loss in a row would have been a cataclysm in American basketball. Never seen before for a team that, without several of its best players (LeBron, Curry, Kawhi, Davis …), is still the number one favorite for gold in Tokyo and that it cannot have any other objective. By history and by resources of a squad that is far from being lame. Farther than any other. This time the great virtues were seen and the few defects of the US hardly appeared, which won with tremendous superiority to Argentina (108-80), a team that, remember, is the current runner-up in the world.

A runner-up in the world, yes, that does not seem to arrive at the best time at these Games. You might think that it does not link well with the United States and its physical superiority, terrain where Nigerians managed without disheveled a few days ago. But Argentina has already lost to Australia and Nigeria (out of 22), the same losses as his rival tonight. If this were a league we would be facing the bottom duel, but only the Argentines exercised as such. If in the two previous games The United States had suffered on the inside (Popovich has only recruited three pure interiors: Adebayo, Green and Love), Argentina made it easier than anyone up to now. Luis Scola does what he can, which at 41 is a lot, but age is quite noticeable. Marcos Delia is a hard worker who cannot be asked for genius. And Francisco Caffaro promises but is still green for these issues (he only played 2 minutes).

Without worrying about suffering inside, the United States put out its devastating version at FIBA. The one in which they score and score from the outside at an impossible pace to follow by rivals, who they lose in the exchange of baskets of two of their own for those of three of others… When they manage to score two. In the first part yes and they went to rest alone 16 below. In the second half little by little the Argentines were carried away by the correcalles in which his rival is also handled when the shots come in and that was his downfall. They had already shown symptoms of losing control in the second quarter, when Facundo Campazzo did not play for a minute due to a blow to the side. By the time Facu returned to the court after the break, the game had gotten out of hand. The five American incumbents – Lillard, Beal, LaVine replacing Tatum, Durant and Adebayo – were on a mission. Save your country from tripping over the same stone three times in a row. And what if they succeeded.

All five finished with double-digit scoring, all three with +/- over 20 points. Durant (17 points, 66.7% from the field, 60% from 3s) and Beal (17 points, 62.5% from the field, 50% from 3s) showed why they are two of the best scorers in the NBA, punishing the Argentine defense from all angles. LaVine, a novelty in the starting lineup, did not clash at all and even left the game of the night with an impressive dunk with a poster included. The last minutes, with the game already seen for sentence, served for Luca Vildoza to vindicate himself before American spectators (still awaiting his Knicks debut) and for Leandro Bolmaro to show himself with several house-brand fantasy plays. However, if anyone has to sit on the couch tonight, it is the Argentines, who are yet to win a match. Americans can sleep soundly, for now. On Friday they play again with Australia and on Sunday against Spain in the last aperitif, we will see if they are poisoned, before heading to Japan.