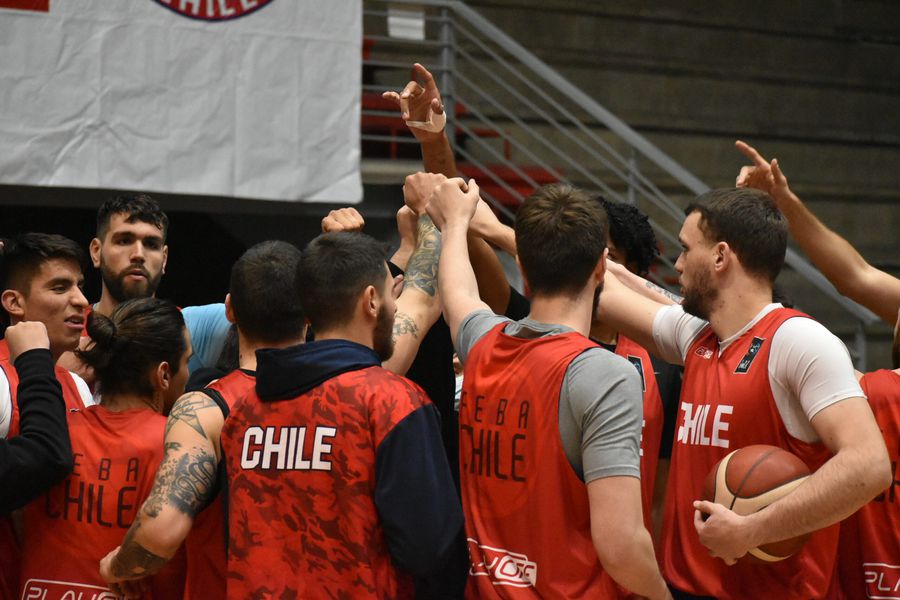 The Golden Generation of Chilean basketball is getting ready to take the first step towards the World Cup of the discipline. The team led by Cristián Santander has been working since last Tuesday, June 29 at the Olympic Training Center with the focus on the Pre-qualifying quadrangular for the planetary event that will be held in 2023 in the Philippines, Japan and Indonesia.

The first of the tests for a squad that will gather for the first time its best weapons from both local and international circles and that has the pressure to change the image of a team whose level has been declining over the years. The combination comes from being out of the AmeriCup, with an opaque presentation in the elimination round, in which they closed as bottom of Group A with seven units, the product of five defeats and just one victory. So now they want their revenge.

Expectations are high for a group that is largely made up of the players who won gold at the 2017 South American Under-17 Championship. Five years later, the same faces, most of which are over two meters tall, will try to guide the game. Chile’s return to a World Cup, a contest in which it has not participated since 1959, when it was the host. By the way, the match window will allow the coaching staff to test their pupils for the 2023 Pan American Games, which will take place in Santiago. Building a solid foundation for the upcoming challenges is critical.

To be installed in the competition, the national team must finish among the two best in Foursquare B, in order to remain in Division A of the FIBA ​​Americas and be placed in the qualifiers that will measure the best in the continent. The Red basket will host the CEO and will face Paraguay, Nicaragua and Bolivia in its area, which entered this instance after defeating Ecuador in a playoff and will be the rival of the Chilean team in the first of the duels to be played. between Tuesday the 13th and Thursday the 15th of July.

By FIBA ​​ranking, Chile is the strongest team in its group. The National Team is located in the 68th place on the list, while the Guarani march in the 72nd. Much lower is Nicaragua and Bolivia, which occupy positions 116 ° and 117 °, respectively. Thus, at least on paper, Santander’s pupils are favorites to win the group and ensure their passage to the next round of the elimination process.

From La Roja they are optimistic, while respecting their opponents. “Bolivia and Nicaragua have some similarity, they play many possessions, use alternative defenses and seek to make our tall men play, away from the basket, on the other hand Paraguay is a more consolidated team, they have been playing together for a long time, they play more set and with a more aggressive defense. Everyone is growing, everyone evolves, they all have players in different leagues outside their country. We respect them, but obviously we want to beat them “, says, about the rivals, DT Santander.

The trans-Andean understands that his pupils arrive as the main candidates to continue advancing in the Qualifiers, although he prefers not to cling to that. Beyond the numbers, the trans-Andean man trusts the quality of his team. “The ranking issue is something of an impostor, because according to that record, for this playoff we are favorites and for Santiago 2023 we would be eighth among the eight in the ranking. I always think that the rankings are to challenge. Despite that, you have to play with the favoritism generated by the team “, manifests.

Despite the expectations generated by the Golden Generation, the Argentine calls for tranquility. “About the 2000 generation, I think they are still in a development stage and it is convenient to follow this process without carrying a backpack on their backs”, it states.

The strategist, finally, details how his squad has been preparing for the start of this challenge. “I see the team very well, with good competitiveness day after day. We have had all the elite preparation details in terms of logistics, work structure. It worked very well “says about it. And, on the objective of the Selection, he adds: “It is our duty to return to compete with the best of the continent”.

From the players’ side there is enthusiasm. “We are very motivated, some of us have been playing for a long time and since we began this process we all have the mentality and the objective to achieve important things, to qualify for a World Cup, to be fighting at the top against teams that are power. This is a good start to the goal of changing history and achieving important things on an adult level ”, comments Ignacio Arroyo, base of the national team and one of the foreign players who will be in the Pre-qualifier.

That favoritism doesn’t just come down to statistics, but names as well. It is the first time that all the star players of the Chilean team will share on the floor. After several citations where they could not coincide, today everyone is focused and ready for the challenge. It is the national Dream Team.

The constellation of national stars comes from different poles, transforming the Chilean team into a fearsome team. Four of them land from the best American universities, highlighting the presence of Felipe Haase and Maxwell Lorca. The latter, one of the great promises of the country, entered the roster to replace Sebastián Silva, who had to leave for academic reasons.

Lorca, a player at the University of Pennsylvania, acts both as a pivot and as four, giving great variations to the Chilean team. “My role in the team is to defend, rebound, block shots, go on offense, give dynamism to the team”, commented to Sporting, also delivering your feelings about these weeks of training. “I have been able to work on a bit of everything, but I have focused on shooting mechanics and definition. I suffered a bit at first, but now I feel much more comfortable playing. I have definitely improved from the past tournaments and the older guys have helped me and taught me a lot in the last few weeks, which I really appreciate. “added.

But there are also several references that come from the other side of the Atlantic. The European delegation is led by Ignacio Arroyo, Sebastián Herrera and Nicolás Carvacho. The national trio arrives after disparate seasons in the old continent.

While Carvacho was part of the best campaign in the history of Rilski Sportist of Bulgaria and Herrera managed to qualify for the Champions League with EWE Baskets Oldenburg, Ignacio Arroyo he had to suffer the relegation of his team, the historic Estudiantes de Madrid.

An experience that brought learning to the 21-year-old guard, who despite his international touch does not feel like a protagonist in the national team. “Now that we were all able to get together, I feel that the 12 of us can contribute great things to the team and we can do very well”He commented in the pre-match on Tuesday. Where he also highlighted the height they have achieved in this payroll, “The weapons we have are height and our inner game. We have great players like Haase, Carvacho, Many and Max, so I think that’s where our great strength lies, to use them and when they close with them we can take the outside game that we also have a lot of quality “added. Specifically, there are five players who exceed 2 meters (Haase, Isla, Suarez, Lorca and Carvacho) giving it a plus that the team did not have in its previous payroll.

Enough reasons to be excited about this generation that is finally reunited. Coaches, players and fans know that it is a good time to have Chile again in a World Cup event. The Golden Generation holds history in their hands.