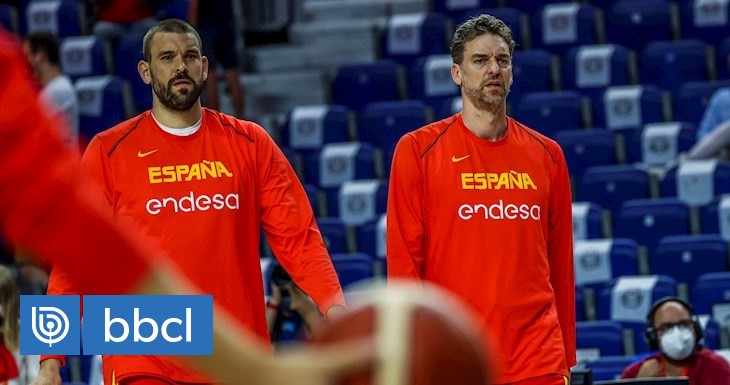 Two decades of successes associated with the Gasol surname. Pau and Marc, the brothers who placed Spain on the NBA map, confirmed their withdrawal from the national team on Tuesday after falling to the United States in the quarterfinals of the Olympic Games.

From the Eurobasket of Turkey-2001, when a twenty-something named Pau led Spain to the bronze medal at the 2021 Olympic event, when the two 2.15 giants closed their international career impotent from the bench.

“It is my last game with the national team for sure, we will see if the last of my career. Thank you all for always being there. From the heart, ”said Pau.

Six minutes and no points for Pau, ten for Marc, also without scoring, was the sad balance of the two legends.

Pau, 41, was out for two seasons due to injury and recovered with the aim of indulging in one last Olympic dance with Spain. They were his fifth Games, always lowered by the United States, for a balance of three medals, two silver (Beijing-2008 and London-2012) and a bronze (Rio-2016).

Same loot that 36-year-old Marc reaped, whose arrival in the national team coincided with the 2006 world title, in the same Saitama Arena where he said goodbye.

Then he celebrated with 20,000 people in the stands, this Tuesday he left with the sad silence that the pandemic forces.

“The younger boys have to play. And in order for them to play, the older boys have to get out of the way ”, the pivot announced in English to journalists.

The Gasols and their generation, from the retired Juan Carlos Navarro, Felipe Reyes or José Manuel Calderón, to the Rudy Fernández, Sergio Rodríguez Sergio Llull or Ricky Rubio, still in the national team, made Spain a world basketball powerhouse.

Until 2000, this national team had an Olympic silver (Los Angeles-1984) and five European medals (four silver and one bronze).

‘Get off this attraction’

In the history of the ‘Family’ there will be forever an unconquered title: Olympic gold. In five editions, since Pau debuted in Athens-2004, the United States has always crossed his path.

On that date it was in the quarterfinals, then came the memorable finals in Beijing and London, in which Spain tutored the NBA almost to the end.

For the memory, that row of stars that instead of celebrating their gold went to the Spanish bench to pay tribute to a dejected Gasol. And an endless hug with his ‘older brother’ Kobe Bryant, with whom he conquered his two rings with the Lakers.

Then came the defeat in the semifinals of Rio and a long five-year period until Beijing, the Games postponed for a year due to covid-19, with Pau suffering a very serious injury.

“You can really overcome anything if you put your mind and your heart into it. Just the fact that I was able to come back, play and compete was already a great success. Now I will have to talk to my family and see if it is worth continuing to play (at club level) or move on to other goals in life, “he summed up this Tuesday.

Marc, who has taken his witness in the Lakers, confirmed that he will continue in basketball and summarized what his career with Spain has meant: “It is time to step down from the attraction that we have risen to many years ago. We have been very lucky, but now is the time to let the new generation ride ”.