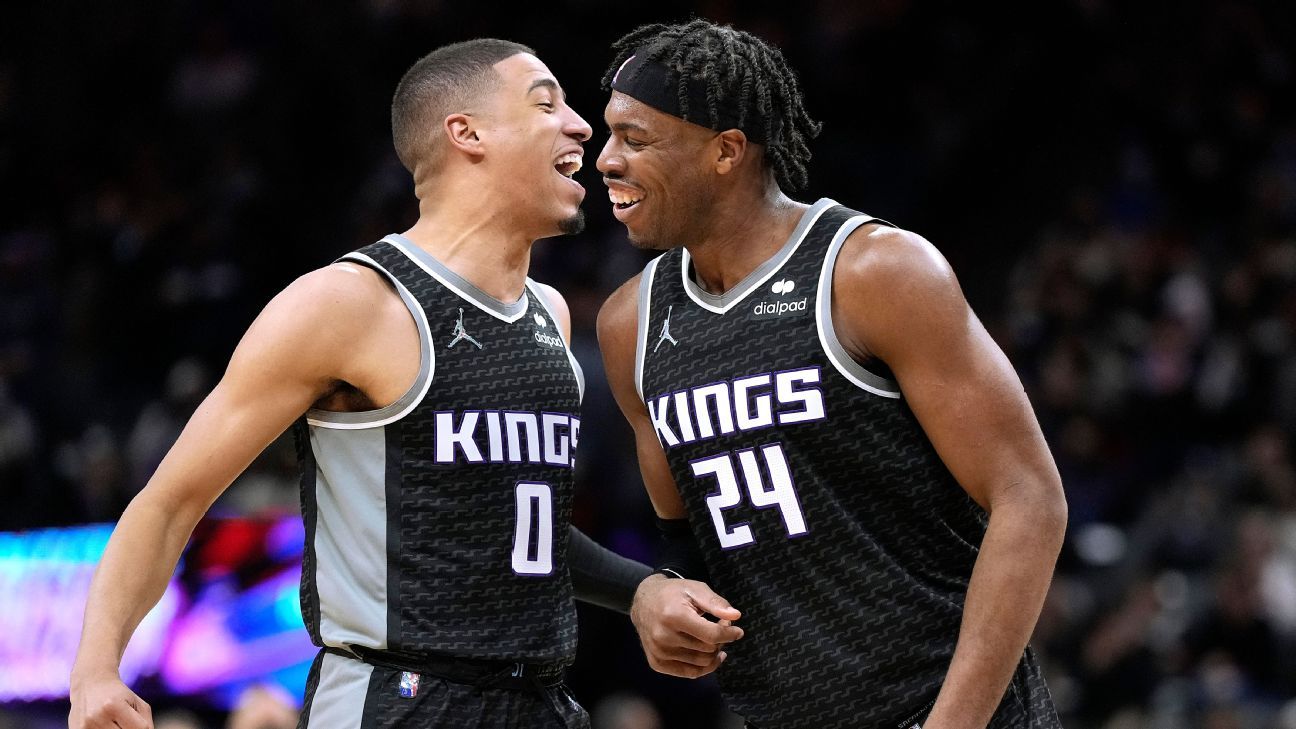 The Brooklyn Nets chained their sixth straight loss on a day in which the Los Angeles Lakers won without LeBron James and teams with good feelings, such as the Philadelphia 76ers or the Dallas Mavericks, fell unexpectedly.

The Kings were strong at home to defeat a struggling Nets 112-101, with 19 points from Harrison Barnes.

Brooklyn Nets was shipwrecked in the last quarter (29-15) and lost 112-101 against Sacramento Kings, who came in a ruinous state of mind after having lost the last seven games.

Seven Kings players had more than 10 points, with Harrison Barnes leading scorer, while Nic Claxton was the best of the Nets (23 points and 11 rebounds) in a night to forget James Harden (4 points with 2 of 11 shooting) and Kyrie Irving (15 points on 5-for-15 shooting).

Los Angeles regained the lead in the final quarter of the match to beat the Blazers 99-94. Great performance by Anthony Davis (30 points) and Carmelo Anthony (24).

In a game of little brilliance and poor shooting, Carmelo Anthony (24 points, with 8 of 12 attempts and 8 rebounds) and Anthony Davis (30 points and 15 rebounds) managed to get the Los Angeles Lakers to beat Portland Trail 99-94 Blazers, led by Norman Powell (30 points and 5 rebounds).

LeBron James missed his fourth straight game with a sore knee, but the Lakers snapped their three-game losing streak.

Kuzma was the star of the game with 24 points and 8 rebounds, while Dinwiddie’s contribution was key with 14 units, 11 rebounds and 10 assists. Despite the drop, Embiid had another MVP game: 27 points, 14 recoveries and 6 assists.

In Philadelphia, two completely opposite trends were measured: the Sixers’ five straight wins versus the Wizards’ six straight losses.

Against all odds, It was those from Washington who took the win 106-103 thanks to Kyle Kuzma (24 points and 7 rebounds) and Spencer Dinwiddie (triple-double with 14 points, 12 rebounds and 10 assists).

Joel Embiid (27 points, 14 rebounds and 6 assists) was the best of the Sixers while the Brazilian Raul Neto played 17 minutes for the Wizards in which he contributed 9 points, 1 rebound and 3 assists.

Lu Dort was the lord of the game with 30 points and 6 rebounds in the 120-114 victory in overtime. In addition, Tre Mann broke the mold and stood out with 29 goals. Despite the loss, Luka had 40 points, 10 assists and 6 rebounds.

Luka Doncic pulled the strings with 40 points, 6 rebounds and 10 assists, but the Dallas Mavericks unexpectedly fell 120-114 at home to the Oklahoma City Thunder after extra time.

Luguentz Dort (30 points and 6 rebounds) and Tre Mann (29 points) gave the Thunder, who are penultimate in the West, a valuable victory.

Houston had a good collective production to beat Cleveland 115-104. Wood and Green were the winner’s scorers with 21 points each. Mobley added 29 for the visit.

The Rockets, last in the West, occupy a worse place than the Thunder, but the Houston team was happy to defeat the Cleveland Cavaliers 115-104 with Jalen Green and Christian Wood as highlights (21 points each).

Evan Mobley (29 points and 12 rebounds) was the leading scorer for the Cavaliers, who lost 17 balls.

Both teams were down, but Utah managed to overcome the situation with Trent Forrest’s 18 points and 8 rebounds, while Conley had 17. In Denver, Forbes was the leading scorer with 26 points. For his part, Facu did not add minutes.

The Utah Jazz took advantage of Nikola Jokic’s absence and, with a tight 108-104 victory over the Denver Nuggets, snapped a very troubling five-game losing streak.

The Argentine Facundo Campazzo, who is not going through his best moment in Denver, did not have minutes in the game.

The Grizzlies defeated the Knicks as visitors by 120 to 108. Jackson Jr. was the figure with 26 points and 10 rebounds while Ja Morant contributed 23. At home, Fournier converted 30 points.

The Memphis Grizzlies exploited the weaknesses of the New York Knicks and beat them 120-108 at Madison Square Garden in a game that they already dominated by 19 points in the second quarter.

Jaren Jackson Jr. (26 points and 10 rebounds) led the Grizzlies and Evan Fournier (30 points and 5 rebounds) did the same for the Knicks.

The Orlando Magic, last in the East, pressed in the last minutes to achieve a highly creditable comeback and beat the Indiana Pacers 119-118 as a visitor.

The best in the Magic was Gary Harris (22 points) and in the Pacers Caris LeVert stood out (26 points, 5 rebounds and 5 assists).

Dominican Chris Duarte played 32 minutes for the Pacers in which he had 11 points, 7 rebounds and 1 assist.

The Celtics dominated the Hornets throughout the game, with Marcus Smart and Jayson Tatum as the main offensive figures in the win.

The Boston Celtics suffered but in the end they won 113-107 against the Charlotte Hornets, who had a fantastic LaMelo Ball (38 points, 6 rebounds and 9 assists).

Josh Richardson (23 points) guided a Celtics that have won three in a row and in which the Dominican Al Horford played 33 minutes and got 6 points, 12 rebounds, 1 assist and 1 steal.

The Lakers won without LeBron and the Nets are still aimless