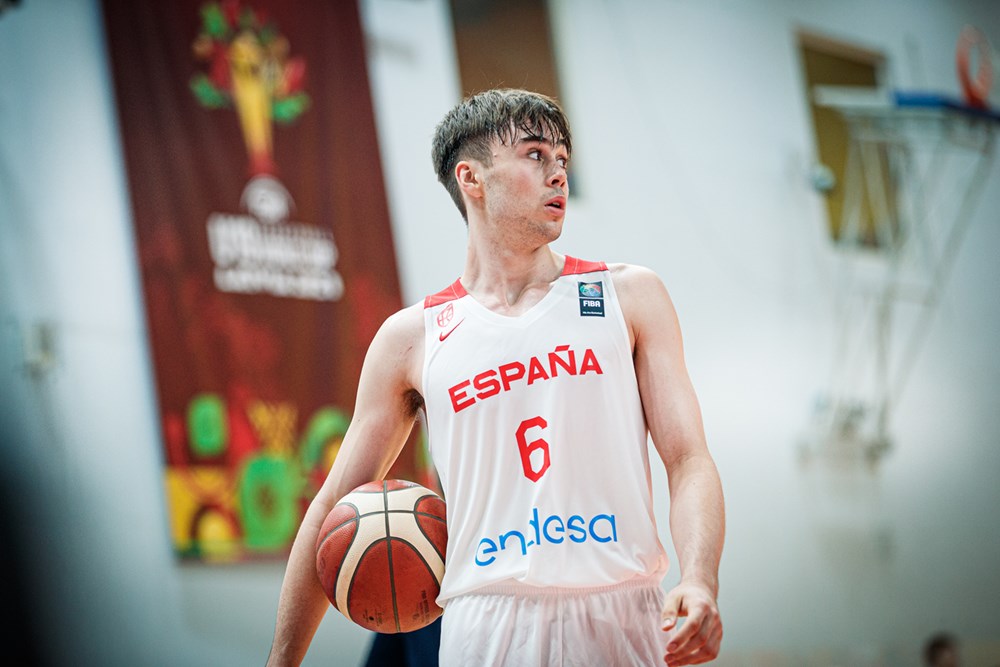 Again the global pandemic leaves us without seeing the Europeans in training. Last season, of course, they were not played, while now FIBA ​​has created the FIBA ​​Challengers, competitions between teams that have wanted to bring their national teams together in summer but with different levels, far from the European formation with divisions A, B and C.

From the Spanish technical committee they have been intelligent and in the last experience of the U20 they have included several outstanding players of the generation of 2003 so that they are tanning, while the majority block of that generation plays the U18 European Challengers.

With the only training competition of this summer already held, the U19 World CupWe now make an exercise of assumption of how, according to our modest opinion, the Spanish U20 and U18 teams would have been for some hypothetical Europeans.

It would correspond to the generation of 2001, who would be orphaned by a Usman Garuba (’02) with the absolute in the Olympic Games and a Santi Aldama (’01) who prepares the NBA Draft. A selection perhaps without huge names, except for Jaime Pradilla, but with good players as well. Our bet would be something continuous with respect to the U18 champions of the 2019 European.

One of the bases would be a Javi garcia without much continuity in ACB (Basket Zaragoza), but with enough experience to impose his quality and his ability to pass in this category. The man from Madrid would accompany him Jorge Mejias, which has earned the renovation in Plata (Albacete) with its capacity since Q&A and its fast game. The trio of ‘about’ would be closed by a player from 2002 who would repeat the call after playing the World Cup: Guillem Ferrando (Valencia), who would put the icing on the cake with his IQ, shot and good work.

Outsiders would be working players. On the one hand, it would take advantage of the versatility of Alessandro scariolo, capable of raising the defensive level, of being ‘one’ and ‘two’ and with a significant improvement in his physique despite not playing much in the NCAA world yet. I also bet on a Sergi huguet that he did not go to the U19 World Cup but that, despite being from 2002, with his quality and his experience in Gold, he could be a player with points, as he demonstrated in the U20 European Challengers. Another essential should be Pau Carreño, a solid player who brings balance and without excelling in any aspect does everything, being that multipurpose that is so much needed. My bet to double after playing the World Cup would be swingman Riojan from 2002 Millán Jiménez (Valencia), who should be one of the stars of the team and the player who will make a difference. To close the perimeter, Miguel Serrano, the ‘three’ owner of the Granca (Silver) subsidiary; With a superior physique and good springs, he has grown in his game and in his decision-making season after season and in this selection he could be the false ‘four’ in case of extreme need.

In the painting the titular duo would be clear. Jaime Pradilla (Valencia) is unbalancing in this category with its quality and technical foundations, while Golden dike I would accompany him to put the power, rebound and game over the rim. His relays would be Ismael tamba, after a year with minutes in Silver would contribute more physical, and a Alonso Faure (’02) that he would enter if he were recovered from the injury that made him miss the concentration of the U19 World Cup.

Players from 2002 who played the World Cup, such as Domènech Y Etxeguren in painting, even a talent like Pau Shopkeeper after a year with few minutes at Barça. Other names to consider would be various players from 2001 such as Marc Garcia, Jorge Viejo, Oier Ardanza, Aleix haro, Pablo Longarela, Martin Fernandez, Gerard jofresa Y Juanjo Santana, among others.

Without a doubt, the generation of 2003 is one of the best in Spain in recent times. From it, a few players should reach the top, with the incentive of being European U16 champions in the last edition that was played. The talent is so great that it is difficult to make a list of 12 players and to be fair.

For the position of ‘one’ I would repeat the talent Juan Nunez; Maybe it would be a lot of burden for him, we already saw in the World Cup that there were phases in which he seemed to be tired, but after a few weeks of disconnection it would be a risk to leave the white blackbird and magic personified out despite being from 2004. Another point guard would Toni Naspler, who has already signed a professional contract with Bàsquet Manresa and will play on loan at Silver (Zentro); a player capable of everything, good plant, tall IQ and game vision. To close the list, nothing better than the culé Rafa Villar, which despite being from 2004 showed his excellent level in the Junior Championship; an all-terrain point guard, defensive bulldog, who puts order in attack and with a lot of rebounding and reading the game.

On the perimeter I would also repeat Ruben Dominguez; the combo guard student is an insurance in the shot, but due to its conditions it goes further, as we analyzed in our U19 World Cup preview. To complement it, the new NCAA Pablo Tamba; the Unicaja youth squad is lethal in transition, with a good 1 × 1 and enormous physique, and has been polishing his launch. The ‘threes’ we would also have clear. One of them is a reference player like Michael Caicedo; vital in Barça, he combines physical, shot of three, penetrations, rebound and above all a winning character to the limit. Your substitute would be Guillem Vazquez, with experience in national teams and who would contribute dark work, play without the ball, rebounding and a multipurpose function very seen with La Penya. To complete that record 12 between interiors and exteriors, with the good versatility of Caicedo and Vázquez and without too many high-end interiors, instead of seeking to give experience to those from 2004 (Garuba, Miller, Rodríguez) or looking for the physical with Aquino I’d bet on an elite shooter like Ian Farm, which could unblock those matches that go awry at some point (as he has shown in his career and confirmed in the junior final).

Painting is perhaps the place that I am least clear about due to the lack of dominant interiors. Miguel Malik Allen (Joventut / Prat) would be the ‘four’ holder; a very mobile player, elastic, with good springs and very dangerous towards the rim and increasingly reliable from the outside. For the ‘five’ I would play it with a cadet from 2005 as it is Aday mara (Basket Zaragoza / 218 cm), who has proven to be at the level of 2003 and his height and talent must be decisive at this level, where strength is not essential either. The minutes of refreshment would give them Iñaki Ordóñez, which with his good reading and hand, together with his height, could alternate the two interior positions, just like a Guillermo Diaz-Graham that he has surprised in EBA (a lot of height and good hand) and that he will physically strengthen in the US.

I have left out with great pain good players: the versatility of Owen aquino (Real Madrid), reading the game of Rafa santos (Unicaja), the points of Christian hernandez (Obradoiro), the mid-distance game of Diego Rivas (Bahía San Agustín), the solidity of Alvaro Martinez (He has just left the Basket Zaragoza subsidiary to join the Miraflores branch) and the intensity of the World Cup interior Hugo Lopez (Students).

From 2004 it would also be good if some players entered the squad, especially a Sediq Garuba (Real Madrid) that it may be debatable that he is not among the twelve chosen for his physique, defense and everything he contributes. Other players that would be interesting to have in this experience would be the high threes Baba Miller (Real Madrid) and Luis Garcia (Real Betis), the point guard Niko Cebrián (Real Madrid), the shooter Jordi Rodriguez (Joventut) and the interiors Eddy pinedo (Torrelodones) and Martin Iglesias (Barça).