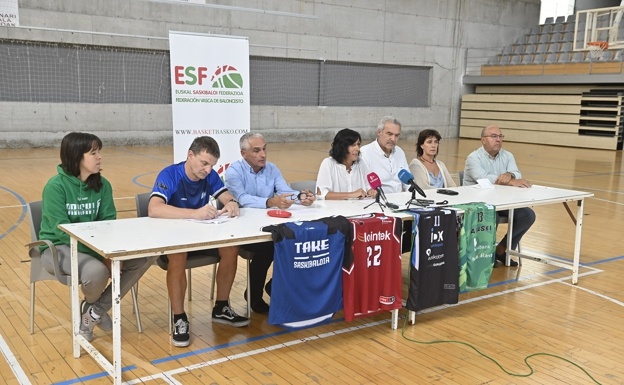 Presentation of the tournament this noon. / inigo royo

The three teams from the IDK Euskotren Women’s League, Kutxabank Araski and Lointek Gernika Bizkaia will compete for the title in a triangular format

The Usabal de Tolosa sports center track will once again host a new top-level basketball event, the Euskal Kopa for women’s basketball, an event organized by the local club TAKE, and which, together with the Tolosa City Council and the Basque Basketball Federation, will act as host.

The tournament was presented this afternoon on the same court by municipal representatives, TAKE, the Basque Basketball Federation and the three teams that will participate in the event.

The Basque clubs that will star in this triangle will be the three Women’s League teams: IDK Euskotren, Kutxabank Araski and last edition’s champion Lointek Gernika Bizkaia,

The preseason advances for these teams that are already coached by women. The tournament will take place over three days, from Friday to Sunday; On Friday, September 23, at 7:00 p.m., the match between IDK Euskotren and Kutxabank Araski will open the competition that will have a second date on Saturday from 6:00 p.m., where Kutxabank Araski and Lointek Gernika Bizkaia will face each other. The tournament will end on Sunday at noon with the match between IDK Euskotren and Lointek Gernika Bizkaia.

«It will be a women’s championship, I highlight it because to continue taking steps in favor of a more egalitarian society it is essential to promote and make visible the female presence in sport. And it is that the sports field is also for women, so the organization of this type of championships is important for the promotion of leading female athletes. To claim that women are key agents in the practice of sports, to claim that there are also women in sport and show that women are also protagonists, “says Mayor Olatz Peon.

Luis María Sautu, president of the Federation, highlights the work carried out by the clubs in recent years. «We started the preseason with the Cups, and we have to present one of the most important events, that of women’s basketball. We are lucky to have three teams in the highest category of women’s basketball. Very few autonomous communities can say that they have this potential, which is due to the very important work that the three clubs are doing. One of the fundamental aspects is that the three clubs at the moment are coached by women, a very important step in promoting the sport, beyond practice and focusing on the figure of the coach who is changing.

Tickets can be purchased on the same day of the matches at the Usabal sports center at the price of three euros, and will be broadcast live on the Twitch and YouTube channels of the Basque Basketball Federation.