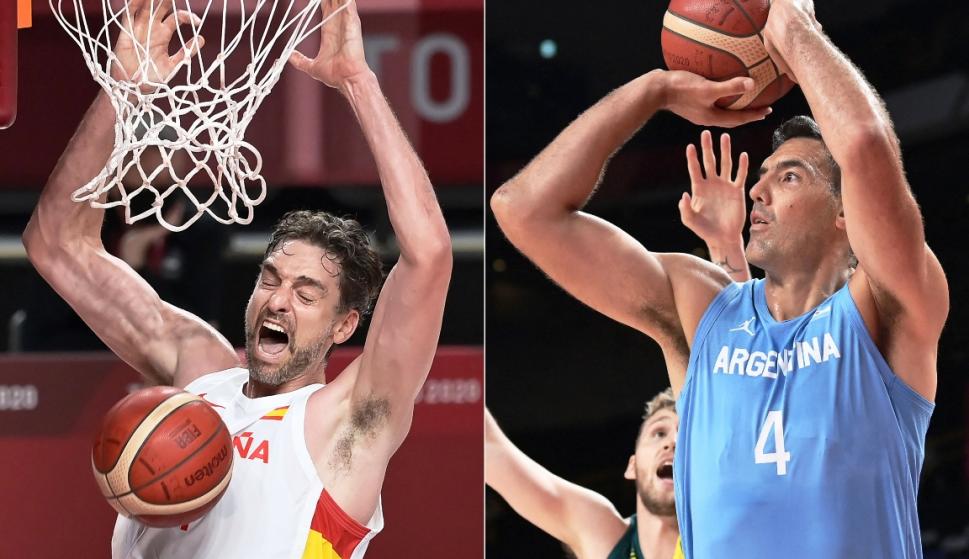 In a single day, national team basketball lost to Spanish Pau Gasol and the Argentine Luis Scola. Two world icons of this sport were dismounted from the Tokyo 2020 Olympics and, both at 41, confirmed that they will no longer play for their country. Too Marc Gasol. It was the day the greats left.

If the day at the Super Arena in Saitama was expected to be intense with the four quarterfinal duels condensed on the same day, it was even more intense when two emblematic players of their teams such as Pau Gasol and Scola, who arrived in Tokyo breaking records of Games played (five for each, also for the Spanish Rudy Fernández) and with the vitola of the ‘last dance’ of their careers in national teams.

They said goodbye in different ways. Gasol knew that if Spain lost to the United States it would be their last match. He had already announced that it was his last championship with the national team family. Spain fought to overcome the match until the last minutes (81-95 at the end) and it was risky to introduce him on the field for a few final minutes, being a player who had just come out of two years injured. “It would have been disrespectful,” said the coach of the Spanish team, Italian Sergio Scariolo.

Scola, who suffered a severe defeat with the Argentine team against Australia (97-59) With the match already decided in the middle of the last quarter (79-50 at 4:38 left), he did have his tribute when he was changed in the absence of the last 51 seconds. In spite of himself, because the Argentine pivot, he confessed, wanted to “end up playing.” “He said ‘I end up playing’, because for him the last defense was more important than the final applause. Obviously I ignored him and I took him 40 seconds (from the end),” confessed his coach, Sergio Hernández, who led to a long and moving applause from everyone present at the Saitama Super Arena.

If something links Pau Gasol and Scola, it is that both crossed borders in their sports careers. The Catalan pivot was the first untrained player in the United States to be chosen third in the NBA ‘Draft’. His passage to the best league in the world opened the way to many other Spaniards for whom a term was coined, the “ÑBA”.

He was also the first Spaniard to win a title in the best league in the world, in 2009 with the Los Angeles Lakers, and to repeat in 2010. His brother Marc became the second Spaniard with a ring in 2019 with the Toronto Raptors. Both starred in a historic initial jump in the ‘All-Star’ of 2015.

Similarly, Scola was part of the group of players, along with Manu Ginobili and Fabricio Oberto, who made their way in the NBA with their stints through the Houston Rockets, Phoenix Suns, Indiana Pacers, Toronto Raptors and Brooklyn Nets.

Commitment to their national team is another element that unites them. Scola was part of the Argentine ‘Golden Generation’ that was runner-up in the world in Indianapolis 2002, won the 2004 Athens Games and was an Olympic bronze in Beijing 2008. Of all his teammates at that time, only he was runner-up again, in China 2019 He is the national team’s top scorer, with almost 2,800 points to his credit, according to the Argentine Basketball Confederation (CAB).

Argentines and Australians united in the final applause for Luis Scola. Photo: AFP

Gasol, for his part, is a member of the ‘Golden Juniors’, a group of players known for winning the 1999 Lisbon Junior World Cup – defeating Argentina in the semifinals and the United States in the final – and who later made up the team. who was two times world champion (2006 and 2019, in the latter Gasol was not due to injury) and three times an Olympic medal, with the silver of Beijing 2008 and London 2012 and the bronze of Rio 2016. In total, the Catalan interior accumulates eleven medals.

“He gave everything for each one of us, he has left us something and we are going to miss him a lot, but we have to continue. Luis is our story.”

“Luis’s retirement is something that touches us all in our hearts, they were many years shared with him, many teachings, shared moments; proud to have shared so many years with Luis and grateful for what he gave us”

How much emotion in that last applause !! Thanks @ LScola4 for teaching us so much in these years and for always leading by example. A great companion luxury. I applaud standing up! 👏👏👏

“I take a very important legacy from Luis. I learned from Luis that you have to honor what one does, that it is not enough to do it well, to beat the other; I learned the work ethic, perseverance”

“He is not a legend of Spanish basketball, of Spanish sport, but of world sport and we have had the honor and privilege of sharing with him, of seeing him, of having been part of Pau’s career.”

Jorge GarbajosaFormer player and president of the Spanish Federation