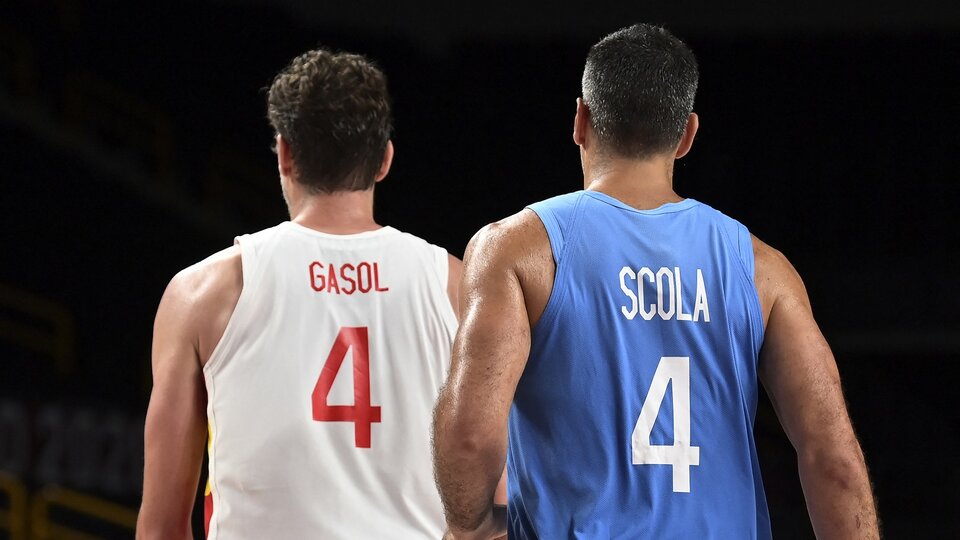 If the second presentation of the Argentine basketball team at the Tokyo Olympics had to be summed up in one sentence, it could be said that what happened this Thursday was like against Slovenia (100-118 at debut), but with better defense. Spain won 81-71 against those led by Sergio “Oveja” Hernández, who no longer depend on themselves to pass the stage, although they have good screenings given the competition format.

Argentina will have to beat Japan at the closing of the group stage, on Sunday at 1.40, and wait for the Czech Republic to be thrashed by the United States. It is that in addition to the first two in each zone (there are three groups), the two best third parties also advance to the quarterfinals. The Czechs won their first game but have a -14 goalscoring difference after the defeat against France and, of course, should suffer a heavy loss to Gregg Popovich’s.

The National Team, with -28 so far, will find a rival in Japan led by Julio Lamas who also lost their two games and has -46 in goals. To win by the minimum, Argentina (will remain with -27) will depend on the USA doing it by at least 14 units against the Czechs (-28), while if the advantage of the “Dream Team” is less, the National Team will have to increase its own in relation to that of the North Americans.

It is worth clarifying that the focus is on Group A because in Group B it is more complicated let there be a “worst” third party. Here Australia leads with 4 points (+20), followed by Italy (3 and +7), Germany (3 and -3) and Nigeria (0 and -24). On the last date, oceans vs. Germans and Italians vs. Africans.

As for the clash with Spain, the National Team left good feelings in the first quarter and then fade away. Nicolás Laprovíttola rewarded his ownership (instead of Luca Vildoza) with a great game: 27 points (4/5 in doubles, 5/9 in triples and 4/7 in free), 4 assists and 6 losses. Behind him appeared Luis Scola (13 points in only 7 shots to the basket) and Facundo Campazzo (10 with 2/4 in doubles, 1/6 in triples and 3/3 in free). Concern for the physical condition of Patricio Garino, who started and played only 4 minutes. On the side of Spain, who enjoyed 24 Argentine losses, was broken by Ricky Rubio (26 points and 4 assists), seconded by Sergio Llull with 10 units.

First quarter. The start of the national team was excellent, with a game that reminded the one that earned him a world runner-up in China 2019. Incessant pressure on defense to provoke four quick Spanish losses and a fluid passing game on offense. Campazzo managed the times with his penetrations and downloads in attack and his slaps when scoring, while Laprovíttola -completely on fire- he added 10 points in the opening minutes to go 15-6.

Of course, Spain would not take long to accommodate the Argentine proposal. Sergio Scariolo took out Marc Gasol, complicated (4 losses in the set; 8 in the game) with the dubbing of Delía and Campazzo, and Ricky Rubio took over the shares and commanding a 10-0 run that forced “Oveja” to time out.

Argentina knew how to react with a partial 10-4 to close the quarter ahead by 25-20. Unlike the clash with Slovenia, the National Team had made friends with the hoop from long distance (4/7 in triples) and enjoyed a great defensive work that caused 7 losses to Spain. Laprovíttola led with 10 points, Campazzo had 8 and Scola had yet to shoot.

2) The champion woke up

The minutes of rest for Campazzo, Scola and Laprovíttola made a dent in the Argentine performance, combined with the return of Rubio to the court (he had gone to the locker room due to a blow). The ball passed through the hands of Deck, Bolmaro and Vildoza with dividends far removed from those expected.

Spain, current world champion, tightened the nuts in defense and, suddenly, Argentina found themselves violating the possession clock and hitting triples that missed the rim. In any case, the Selection remained in the game thanks to its defense, rival errors and every so often it managed to get the occasional bombshell from the gallery, as with Laprovíttola.

But to the defensive expansion of Spain, Argentina did not know how to respond to him other than with long-distance shots (and many bricks), something that would last throughout the match. To top it off, when Delía managed to take the offensive rebound, her volleys ended in losses. The Spanish defense was so good (and in opposition, the Argentine attack so weak) that even Scola (two points in the first half) ended up eaten by the cicada in the last Albiceleste attack. The score for the quarter was overwhelming: 20-9 for Spain and a 40-34 lead at halftime.

Hernández opted for send Deck to the entrance instead of Garino, but it was not the day of Santiago, fought with the rim (1/8 in shots) and lost in defensive rotations. While Spain took increasingly greater distances, the National Team wanted to return to the version of the first quarter, with Campazzo penetrating and unloading for Delía, but the pivot did not get one (2 points, 1/4 in doubles, 7 rebounds, 5 losses ).

Laprovíttola was still the best and approached his team with 7 consecutive points, almost like a déjà vu from the 2019 final, when Deck was the only Argentine in the game. Although the duel was very intense, there was room for comic relief with the forty-year-old Pau Gasol failing a dunk that could well have been a layup.

It was impossible for Campazzo to find a colleague for the pick & roll. Hernández tried twenty-something Caffaro but at the first connection with Facu, the ball slipped out of the hands of the American university lungo. The offensive drought was almost total and, when everything seemed to be heading, offensive fouls appeared. Spain got 14 with a bombshell by Sergio Llull and a double and a foul by Pau Gasol, taking advantage of Caffaro. A Vildoza triple cut the distance while a remarkable pass from a throw-in by Laprovíttola to the double and a Brussino foul left the National Team down by “only” 61-53.

“There are no shots of 10, 11 or 12 points.” The phrase is well known and is commonly used to refer to the desperation of a team who is far behind on the scoreboard and begins to shoot triple even though there are better options. Although repeated, the date was perfect for the last quarter of the Argentina that, hurried by the clock, watched Spain move away from him while his playbook had nothing but triples (30 shots in total, most of them with the mark on top; 10 conversions).

Aware that the defeat was a fact and the important thing was to cut the distance, Argentina began to add two. But Spain did not think of lowering its intensity and the albiceleste frustration ended up reflected in Campazzo, who reached his fifth foul marking Rubio and ended up tearing his shirt from the fight.

Scola gave his face on the end with six consecutive points but his appearance was a mirage in the middle of the Argentine derailment. Losses and more losses were repeated until closing, only appeased by a Spanish stay in the last seconds that served to cut the distance and make up the score, just like against Slovenia.

After 48 points against the albiceleste, Luka Doncic added 25 points, 7 rebounds and 7 assists in Slovenia’s 116-81 win over Japan in the first shift of the day on Thursday. The crack was well accompanied by Zoran Dragic, with 24. For the locals, led by Argentine Julio Lamas, the NBA Rui Hachimura (34) and Yuta Watanabe (17) stood out.