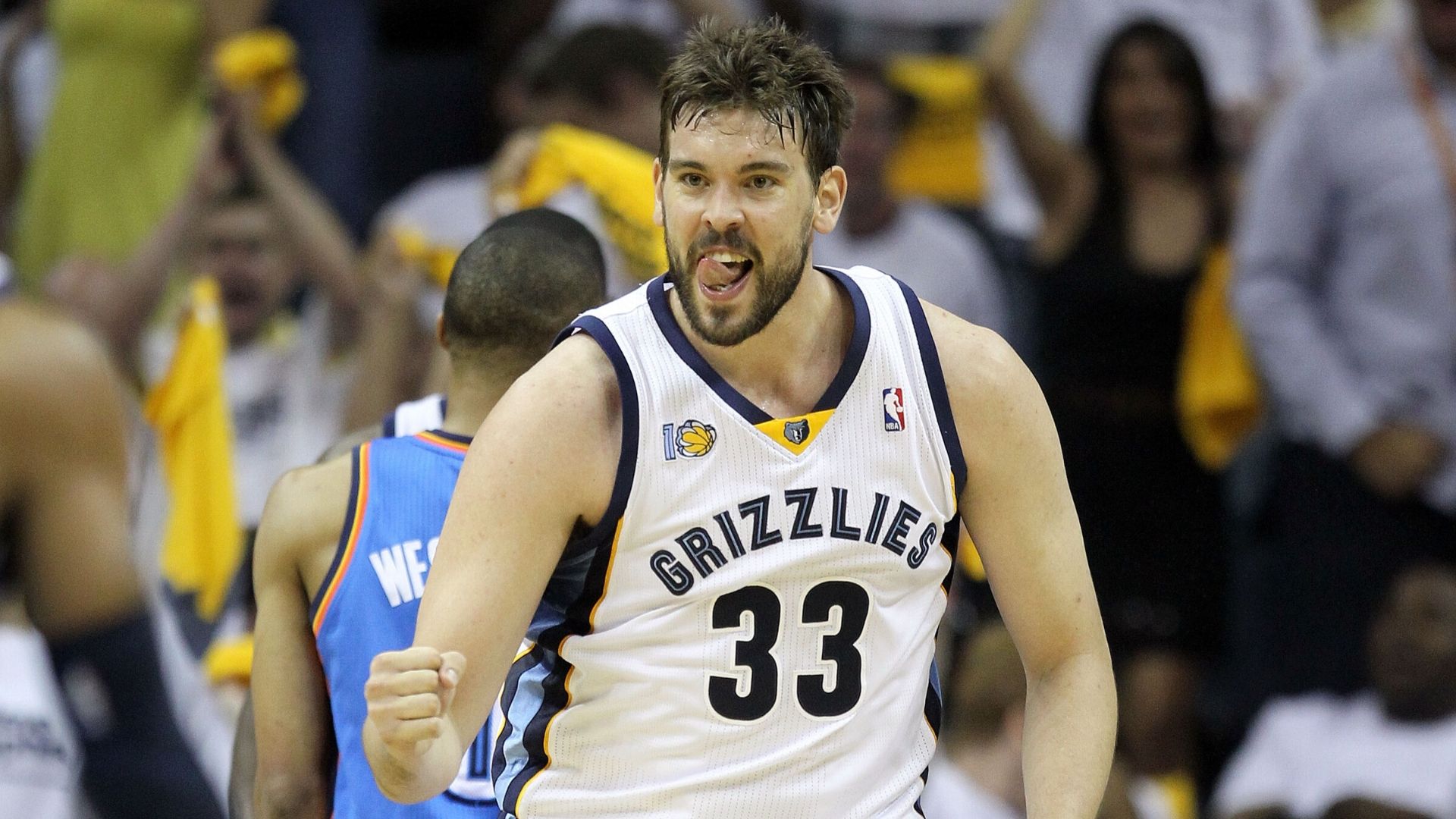 The time of Marc Gasol in the NBA it seems to be over. The disappointing 2020-2021 season that he had in the Los Angeles Lakers with physical problems, his positive in COVID and the dynamics of the team have led him to leave the Californian team for the Memphis Grizzlies, where everything indicates that he will be cut. After 13 campaigns in the elite of world basketball, the Catalan will say goodbye to the best league in the world with a championship ring, 3 elections for the All-Star Game, 2 times All-NBA and having won the award for Best Defender of the Year .

On the occasion of his potential goodbye to the NBA we collect the 5 highlights of his career in the competition.

1 – Defender of the year

By 2013, advanced statistics were relatively well established in NBA circles, that is, among coaches, data experts and other members of the franchises. Not so for the public, who looked askance at those seemingly meaningless data lists as well as metrics they had never heard of. At that time the Memphis Grizzlies were the best defense in the entire NBA, tied with the Indiana Pacers practically, achieving in the 2012-13 season a defensive ratio of 99.1 points conceded per 100 possessions, something that had been possible thanks to the fantastic balance between exterior and interior lines. Although, without a doubt, the main person responsible for those figures was none other than Marc Gasol.

MORE | A career of legend: the numbers, statistics and records of Marc Gasol in the NBA

The Spaniard had been the team’s defensive anchor for a long time, but that season he raised the level even more, having a positive impact of +8.2 net rating when on the court, 5.4 Defensive Win Shares and 3.1 from Defensive Box Plus Minus, the best record in the entire NBA. In short, the Spanish was the best defender for one of the best defensive teams in the competition. However, the main favorite was LeBron James even though the Miami Heat was the 9th best defender and he was the 6th best defender on the roster in terms of efficiency (101.9).

The vote for the Best Defender of the Year award ended up favoring Marc, who won 212 points out of a maximum of 605, beating James by 63 points difference. In this way, the Catalan was established as the most prominent in the defensive plot of that course, despite the fact that later he was not included in the Best defensive quintet, but in the second, being ahead of him Tyson Chandler and Serge Ibaka.

2 – A Conference Finals to remember

The first years of the last decade saw the birth of a team in its most exact definition such as Lionel Hollins’ Memphis Grizzlies. Balanced, united and with very marked roles, those from Tennessee debuted in the 2011 Playoffs, managing to dethrone the San Antonio Spurs in the First Round, then falling in a tight series against the Oklahoma City Thunder by 4 to 3. Despite a great 2012, the young Clippers got them down at the first exchange 4-3 again.

It would finally be in 2013 when they reached their best version, coming from the hand of the most decisive Marc Gasol. And it is that in that course the Spaniard achieved the second best mark of the franchise in Win Shares with 11.5, only surpassed by his brother Pau in 2006 (12.0), but his best performance would come in the Playoffs, space in the who established himself as one of the best centers in the entire NBA.

First they retaliated against the Clippers in the First Round 4-2 and then “revenge” on OKC in just 5 games. A tie in which Gasol was by far the best of the Grizzlies, reaching an average of 19.4 points, 8.4 rebounds and 3.0 blocks with a 48% effectiveness. The Catalan was unrivaled in that tie in the Conference semifinals, leaving Ibaka at 37% in field goals with only 12.6 goals on average. In this way Memphis reached their first and only Western Finals to date, where, despite the great moment they were going through, they could not surprise the Spurs who swept them.

That collective success included several performances to remember the Spaniard, such as in Game 2 against Oklahoma where he added 24 points, 5 rebounds, 5 assists and 61% accuracy, as well as the 23 points, 11 rebounds and 6 blocks of Game 4 from that same series. All this earned Marc to finish pretty much tied with Zach Randolph as Memphis’ leading scorer in the Playoffs at 17.2 and the most impactful player in the game.

The 2015 All-Star Game, Held in Brooklyn, it had a characteristic Spanish role as the popular votes of the event left a particular stamp. And it is that the Gasol brothers started as headlines in the All-Star Party that year.

That image that made the front pages of the newspapers on that February 16, 2015, allowed Spanish basketball to look from you to you to other countries, with two players among the 12 best on the planet. One night that would end up falling on the west side of Marc Gasol by 163 to 158 and with Marc adding 6 points and 10 rebounds while Pau contributed 10 points and 12 rebounds. This would not be the first time that there were two brothers in an All-Star Game, as Tom and Dick Van Arsdale already were in the 1970 and 1971 editions. Unlike the Van Arsdale brothers, the Gasols would be headlines. A milestone in NBA history.

At the same time, that night marked a before and after since it is the only time that two Spanish players participated in the All-Star Game simultaneously, something that had happened in other competitions such as the match between Rookies and Sophomores with Rudy Fernández and Marc Gasol in 2009 in Phoenix.

Marc was never particularly given to shining as a scorer, his thing was rather something else. Creating a game, defending, helping to move the ball … All of this was the essence of the Sant Boi center, but on some occasions he was lavish especially if the occasion deserved it or it was entirely necessary for his team to take the victory.

In the 2016-17 season Marc reached his highest point of individual performance of his entire NBA career, in that course something changed in him and in his game, because under the orders of David Fizdale the Spaniard began to shoot three-pointers. regular, proving to be accurate and reliable from those latitudes. After trying only 66 triples in his first 8 seasons, in 2016-17 he went on to launch 268 only in that course with an effectiveness of 38.8%.

This explains that the January 25, 2017 the Spaniard had his best career night in the NBA, with the Toronto Raptors being his victim. However, that meeting was anything but simple as the Canadians, despite having casualties, managed to put the Grizzlies in serious trouble thanks to the combination of Kyle Lowry and Norman Powell. At half time Marc already had 23 points, fundamentally for his fantastic 3 of 6 from the triple and 5 of 8 in shots of 2. The Catalan’s exit from the dressing room was one of his greatest individual demonstrations in his time in Memphis, adding 13 goals in 5 of 7 attempts, disputing all the minutes of the quarter to consummate the comeback of Memphis. Despite this, the game would not decant until the final moments, precisely from the hands of Gasol who broke the tie and sentenced the match from the free kick, putting the final 101-99.

In this way, Marc Gasol completed his brightest night in scoring in the league, ending with 42 points on 14 of 25 shooting that included a series of 5 of 10 to triple and 7 rebounds and 2 assists in 38 minutes. In this way, the Catalan surpassed his previous career high, set at 38 goals against the Pelicans in 2015.

After the Grizzlies project ran aground, it was time to consider leaving and Memphis decided to send Marc to a destination where he could fight for a title, with the Toronto Raptors being the designated place. After a brief period of adaptation in the Regular Phase, Nick Nurse ended up finding the best way to use Gasol, taking advantage of his defensive abilities to make him a fundamental piece in the protection of the rim, both in matches against other centers and against scoring forwards. .

A good example of its importance during 2019 playoffs came in the tie against the Philadelphia 76ers, a very hard one, where he left Joel Embiid with 31% shooting from the field over 7 games to access the Eastern Finals. There the Spanish would have less importance in the scheme, since the key was to stop Antetokounmpo, although he also did a great job against Lopez.

In this way Toronto was planted in the Finals against the Golden State Warriors where he was vital in offensive production.to. In the first game he was one of the top scorers with 20 points, something that he would repeat in the third and fifth games with 17 goals in each of them. Gasol managed to take advantage of the Californians’ defense to produce near the rim. Thus, the Spaniard finished that tie with 12 points, 7.3 rebounds and an average effectiveness of 44.7%, and most importantly, the ring. Finally Marc achieved what he wanted so much, which was nothing other than the championship, putting the finishing touch to a unique career.