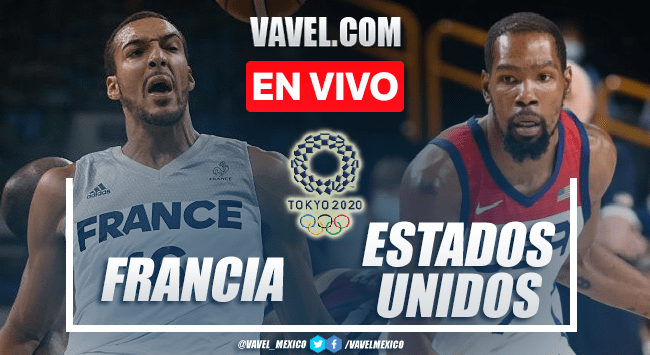 Thank you for following the broadcast of the game between the United States and France in the final of the 2020 Olympic Games.

In an extremely tight finish, the United States fulfilled its purpose and beat France to earn one more gold medal on their record.

De Colo makes the two points from the free throw to get within three points in 10 seconds.

Damian Lillard turns on and collaborates with one more triple.

Frank with the mid-range shot and hits the triple.

Batum with the jump and adds two more points.

Bam Adebayo opens the scoring for this quarter with two more points.

Timothe from the corner makes the triple.

Jrue Holiday concrete and unforgiving within the area.

De Colo scores both free throws from the penalty line.

Kevin Durant gets into the area and makes the double uncomfortable.

Kevin Durant from the restricted area to double.

Yabusele from the corner hits the triple for the first points of the second half.

The second half begins.

Of Color now yes it hits the triple from the corner.

Jason Tatum takes advantage of the space to add double.

Evan Fournier with the laundry and adds two more points to his account.

Kevin Durant gets into the kitchen and hits the foul and counts.

Half a turn of Fall to add two more points.

Jason Tatum with the jumper and is still on with one more double.

End of the first quarter

Jason Tatum with the triple to take a four-point lead.

Timothe with triple to tie the board

Bam Adebayo with the half turn and concretized the double.

Fournier refines the long-distance shot and hits the triple.

Kevin Durant accelerates into the paint and opens the scoreboard for his personal account.

Fournier with the half turn and adds two more points.

Rudy Gobert with the swing and scores the first two points of the game.

The final between the United States and France begins.

The national anthems of France and the United States are sung in the Ariake Arena.

At this time, the two teams are presented, both to France and to the United States prior to the final of the 2020 Olympic Games.

In the history of the Olympic Games France and the United States They have met on seven occasions, where the balance favors the North Americans with a balance of six victories for the already mentioned first defeat in the group stage.

Two wins in a row

Very few times the final for the gold has been contested before the bronze medal, but this time it happened due to the television audience in the United States because it is a prime time to see the Dream Team.

The revenge that is not revenge

United States he seeks revenge for the first defeat against France and to defeat them, although the Gauls will seek that the favoritism of the North Americans does not prevail and spoil the entire celebration of their gold.

In a few moments we will share with you the starting lineups France vs United States live to the men’s basketball grand final of the 2020 Olympic Games, in addition to the latest information emerging from the Saitama Super Arena. Do not miss details of the game with the minute by minute and live online from VAVEL.

Be careful with this player from the United States

Be careful with this player from France

How did the United States get to the grand final?

How did France get to the grand final?

The Saitama Super Arena It was built in the year 2000 and has not only served to host sporting events, but has also had concerts and, in fact, houses a John Lennon museum. This venue will host all men’s and women’s basketball matches.

Good afternoon to all VAVEL readers! Welcome to the broadcast of the match France vs United States live, corresponding to the men’s basketball grand final of the 2020 Olympic Games. The meeting will take place at the Ariake Arena in Tokyo, at 9:30 p.m.