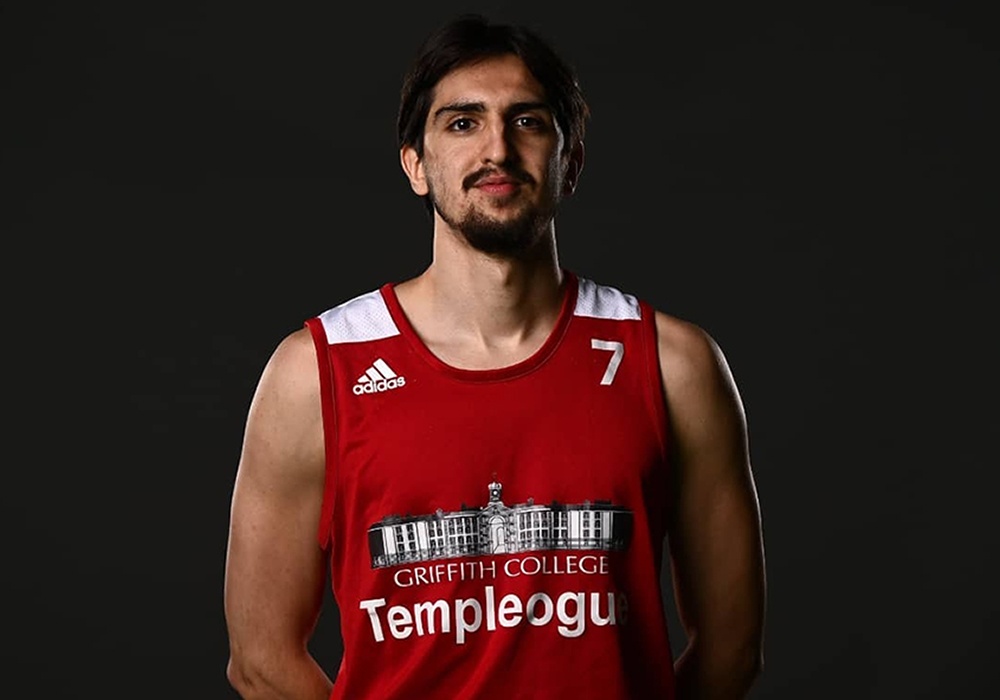 Today we return to Ireland, a country that we have already visited on some occasion before, to speak with a young Spanish player such as Enrique Melini (Carballo, 2000 / 198 cm)who this season has left the FEB Leagues to sign for the Griffith College Templeogue in Ireland, from where he attends us to talk about his beginnings, his time at EBA and about what has led him to go abroad.

Basketball Zone – How were your beginnings in basketball?

Enrique Melini – Well, I started quite young, at 6 years old. At home we have always been told that we had to practice some sport; my father played basketball too and he’s a big fan, so adding those two things to the fact that I’ve always been quite tall because my mother signed me up and that’s how I started training.

And well, if I’m not mistaken, I think I was going for several months just to train because I didn’t want to go to play the games, since I was ashamed [risas]. I was a very shy child, but it all started the moment my mother told me that she would either start going to games or take me out of basketball.

ZdB – From a very young age, the FEB puts the magnifying glass on you and takes you to his talent detection concentration, but the thing goes further and you go with the OR14 and the OR15 despite not belonging to an A clubCB. how do you remember that experience?

EM – Especially at the beginning it is very shocking. You don’t know a lot of people, people who come from the clubs top… and I came from my town and didn’t understand very well what that thing was about national teams or anything. Over the years, it became something a little more “normal” within the surreal that it continues to be to be competing with the best of your generation, but in the end, we were all still children with a great fondness for basketball.

It was a very satisfying and very beautiful stage. I continue to maintain a relationship with some since the first concentrations and seeing a few compete in ACB and even with the senior team is something very, very cool.

ZdB – You played in cadet in Xiria and doubled even with the junior of Artai, highlightsing in the Galician team, in CSpanish championships… Lor normal in these cases is to make the leap towards a more powerful quarry structure such as Valencia, Madrid, Barca or even to a basketball academy. Did you have offers?

EM – Well, if I’m not mistaken, the first time I had a serious offer, beyond the clubs near Carballo, it was in cadet, when there was an approach from Sevilla and it was like the first time I said “oh, wow, Start getting really serious about this.” [risas].

From there, Obra appeared, the year before I left, and I decided to stay and try to win another league and go to a Spanish Championship with my usual friends. And we made it. So very glad I made that decision.

That summer there were already conversations with several Galician clubs, and even with CBA, but Obra seemed to me the best option; I had friends there and without a doubt it was the best offer, personal, academic and sporting.

ZdB – Finally, as you say, you jump to the Obradoiro in junior. As was leave Xiria and stop at a Team ACB?

EM – Arriving at Obra meant beginning to learn how a professional club works and what senior basketball is like, spending the first two years at Peleteiro, alternating junior and EBA, and starting my second year starting to train with the ACB, knowing how it works the highest level of basketball in Spain. I went from training in school and small pavilions to training in a Multipurpose where ACB is played; is probably the best way to explain it [risas].

ZdB – You spend four seasons in the Obradoiro ranks (2016-20). In them, everything happened: from playing in jorchild (even in dynamic EBA) to conduct preseason and trainments with the TOCB, going through a season pandinjury loss and the anchoring in EBA. What do you take from those four seasons?

EM – Well, sportingly there were two very very different stages, before and after the injury, which coincided with my jump to senior. The first two years were probably two of the best years of my life; We showed that we could compete with anyone and we almost gave a scare to a whole Joventut in the Spanish Championship. From the injury, well, quite the opposite; a couple of very very complicated and difficult years. On top of that, with the coronavirus shortly after returning to the slopes.

If I have to stay with something, it is, without a doubt, with the people I have met. From friends, coaches, physical trainers, physios, doctors, teachers… I have been lucky enough to meet wonderful people in those four years and most of the very important people in my life have left Santiago, and friendships that I think will stay forever. life. That’s the best I’ve got.

ZdB – Last 20/21 you come back home with Basket Xiria. doCHow was the season?

EM – The main objective for me was to have a healthy year and, apart from some discomfort or minor injury, that’s how it was. Objective accomplished. At the basketball level it was a bit complicated, we wanted to avoid relegation and we were close, but we couldn’t; for me I think it went from less to more, being the first full senior season that I had, I was not very happy with my performance, but it served to regain a little confidence, so I am very grateful to Xiria for giving me the opportunity to come back and welcome me with open arms. A real pleasure.

ZdB – In this campaign you go to Ireland and firms by Griffith College Templeogue. doQwhat motivatedor that change?

EM – I had been wanting to leave Spain for a long time, and with Xiria being relegated I wasn’t very sure what to do, because I didn’t want to play in a lower category than the EBA. We hadn’t received anything very interesting and talking to a friend of mine who is here in Dublin, also for basketball, she told me why she didn’t come to me. So it was [risas].

I think it’s a very good experience, being the first really away from home for me, studying at a good university, in one of the best teams in the country… I didn’t think about it much and it’s been great so far.

EM – Well, he is a coach who respects veterans a lot and trusts them a lot, so sometimes it has been difficult to find a very marked role for me. But hey, if I’m not mistaken I’m the team’s third scorer and I try to contribute in many different facets (defense, rebounding…), I think my contribution in terms of my minutes is being really good.

ZdB – Templeogue is a team with a certain cachet in Ireland, with several wins in the National Cup. What is the objective is season?

EM – Yes, we have two competitions here: the league itself and the National Cup (which is given even more importance than the league). For the past five years Templeogue has won one of two titles each year. For this year we only have the league left, since we are eliminated from the cup. We have two games left to win to get a place in the playoffs and from then on it’s do or die games, so we’re confident we can take the league.

EM – Both are, without a doubt, two of the best players in the country. Jason, being older, is still probably the most decisive player in the competition, although unfortunately he has had some injuries in important moments. And Lorcan is physically the best player I have seen in my life and there is no one relatively close, even in ACB I have not seen anyone with the physical capacity of him; crazy.

ZdB – Tell us a bit about the weekly plan of the team and the structure of the club.

EM – As a team we train two days all together, Tuesday and Thursday. On Mondays I do individual training and on Wednesdays we either train or play with the university team, since there is a university league as well. Physical preparation is the responsibility of each one to be in good shape to compete. The structure could be said to be similar to an EBA, they are not very, very big clubs and they have a fairly familiar atmosphere, everyone knows each other.

ZdB – dubin is a somewhat expensive city. dohow is your life there?

EM – Those of us who are on scholarships have the university and the apartment on the campus covered. The food is already covered by us. Yes, it is expensive to eat out and life in general, but going to the supermarket (both Tesco and Lidl) is not a very exaggerated difference with Spain. Also, it is quite easy to get a job here and the salary is very good.

ZdB – ¿Have you had time to enjoy Ireland?

EM – The truth is that I have little free time between basketball, studying and working, but Dublin is a very cool city, a very good atmosphere always in the streets, a large number of pubs of all kinds, shopping areas, the port area is much more modern, Phoenix Park, if I’m not mistaken is one of the largest parks in Europe and there are always deer walking around there, they also have a fairly large zoo there, several highly recommended art museums… And the amount of things that still I am left to discover only in Dublin. In addition, from the rest of the country, the interior area is very beautiful and all the cliff areas are incredible landscapes, but I still have to see them.

ZdB – How does the country live the pandemic? doIs there a health protocol in basketball?

EM – Well, they have always been very strict, as I have been told. At the beginning they established a lot of restrictions as soon as a case began to appear, and even this year we have had quite a few restrictions in terms of hours, capacity of premises… Luckily it seems that now it is beginning to relax a lot and it is more like life ” normal”. As for basketball, we have not had to test or anything at any time, just in case there was any contact with positives.

ZdB – You have experienced a bit of everything: from “child prodigy”, I went through team ACBthe unpleasantness of the hardness of the injuries, now new experience abroador… What would you like will bring him the future to Enrique Melini?

EM – Well, for now I’ll be here with Templeogue for three years, so take it easy for a while. From there, it will have to be seen. I like living abroad a lot, although sometimes it’s hard being away from home, so I don’t mind continuing to play abroad as long as it’s in big cities, but I’m not ruling anything out.

ZdB – Thank you very much for your time, and enjoy the experience.

EM – Thank you very much for your interest. Any questions or queries that someone has about the country or playing here, happy to answer them!