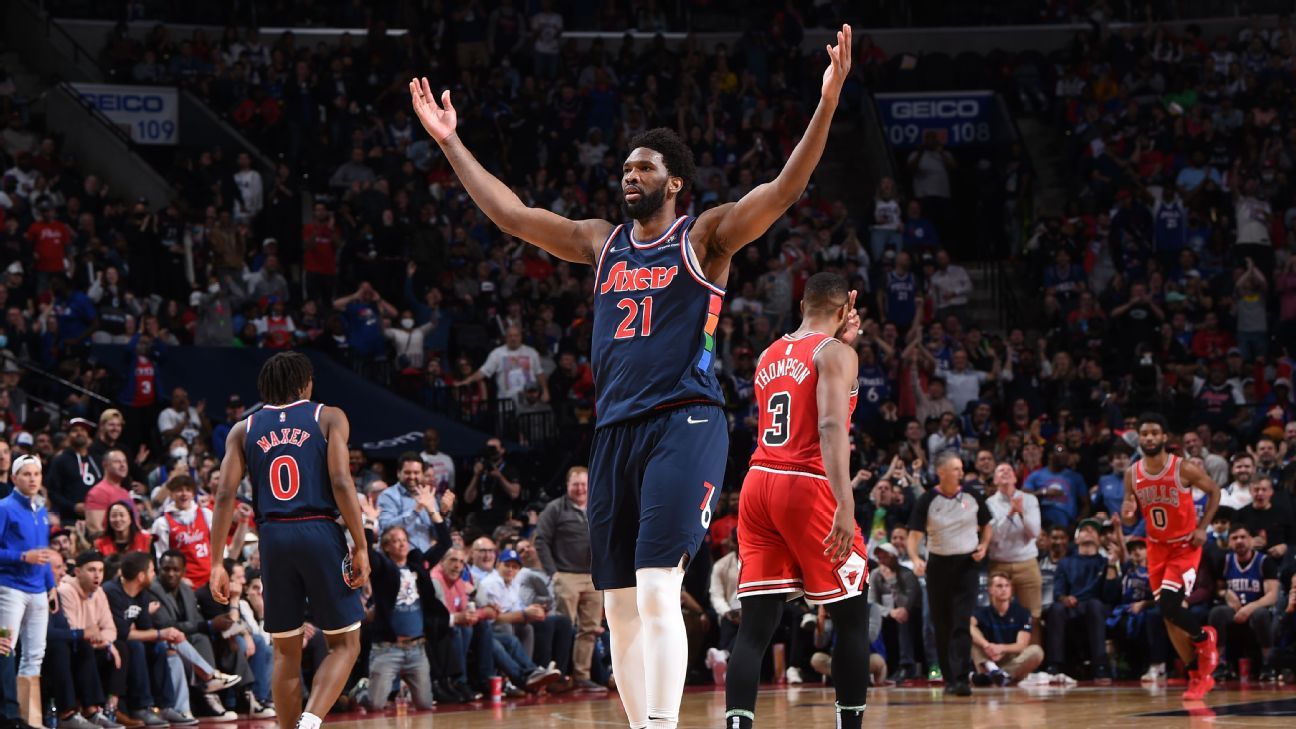 LOS ANGELES — With Joel Embiid and James Harden at the helm, the Philadelphia 76ers continued with a firm step against the Chicago Bulls on a day in which Nikola Jokic defeated some Golden State Warriors who do not raise their heads and Luka Doncic beat Rudy Gobert in a very intense duel.

What’s more, Gregg Popovich, the legendary coach of the San Antonio Spurs, tied Don Nelson for the most winning coach in NBA history (1,335).

With Embiid unstoppable (43 points and 14 rebounds) and Harden in tune (16 plus 14 assists), Philadelphia beat Chicago. La Barba equaled Reggie Miller as the third all-time tripler in the competition.

The five games that James Harden has played with the Philadelphia 76ers have been all victories for the Sixers, although this afternoon the main architect of the victory over the Chicago Bulls was Joel Embiid with 43 points and 14 rebounds.

Without the injured Nikola Vucevic, Alex Caruso and Lonzo Ball, the Bulls added their fifth consecutive loss despite the good performance of Zach LaVine (26 points, 8 rebounds and 5 assists) and DeMar DeRozan (23 points, 11 rebounds and 8 assists).

Luka Doncic and Rudy Gobert sought each other -and found each other- throughout the night with various crosses and clashes between the two, but in the end it was the Mavericks point guard who scored the victory with a great performance of 35 points, 16 rebounds , 7 assists, 3 steals and a block.

The Mavericks’ fifth consecutive victory came against the Jazz led by Bojan Bogdanovic (21 points) in what could be an appetizer for a hypothetical first round of the playoffs (those from Utah are now fourth in the West and those from Dallas are fifths).

Spaniard Juancho Hernangómez had no place in the Jazz’s rotation.

Nikola Jokic was the great highlight of the game with 32 points, 15 rebounds and 13 assists, while Morris contributed 18 points, 7 assists and 5 rebounds. In addition, Facu Campazzo entered 6 minutes and gave 1 assist.

Nikola Jokic recorded a triple-double (32 points, 15 rebounds and 13 assists) against the Golden State Warriors so that the Denver Nuggets, who are going through their best moment of the season, obtained their ninth victory in the last ten games.

By contrast, Steve Kerr’s men have lost five straight and won only two in their last ten games, although they almost gave up this match beforehand as Stephen Curry, Klay Thompson and Andrew Wiggins sat out due to a break.

With the win, Popovich tied Don Nelson’s mark for most games won as a coach in NBA history. In addition, Dejounte Murray was the figure with 26 points, 10 rebounds and 8 assists.

Without LeBron James, who after his historic game of 56 points on Saturday today did not play due to knee discomfort, the Los Angeles Lakers fell to a very successful San Antonio Spurs (54.8% shooting success) and led by Dejounte Murray ( 26 points, 10 rebounds and 8 assists).

Talen Horton-Tucker (18 points) was the top scorer for the Lakers, although the protagonist of the match was Popovich, who after equaling Don Nelson today will have his first opportunity on Wednesday, against the Toronto Raptors, to become the coach with highest number of wins in history.

Miami beat Houston 123-106 and continues as the leader in the NBA East. Herro was brilliant with 31 points, Butler contributed 21 and Adebayo scored 18 and grabbed 10 rebounds.

Tyler Herro (31 points) led a Miami Heat that, after a somewhat hesitant start (losing by 13 points in the second quarter), turned the game around with solvency against the Houston Rockets, who are bottom in the West.

Kevin Porter Jr. (22 points) was the best for the Rockets while in the Heat, leader of the East with three wins in a row, Victor Oladipo also stood out, who scored 11 points in his first game after 11 months out due to injury .

The Argentine contributed 2 points, 1 rebound and 1 assist in the 124-81 win against the Trail Blazers. Karl Anthony-Towns was the figure with 27 points and 13 rebounds, while in Portland, Williams was the leading scorer with 27.

The Dominican-American Karl-Anthony Towns celebrated that this Monday he was chosen player of the week in the West with a double-double (27 points and 13 rebounds) and a new victory for the Minnesota Timberwolves totally launched and who have won in their last five duels.

Brandon Williams (27 points and 8 rebounds) was the best of the Blazers who were crushed by the Wolves and who made a fool of themselves in terms of accuracy in front of the basket (27.7% in field goals and 25% in triples).

Julius Randle was the great highlight of the night with an impressive game: 46 points and 10 rebounds. In addition, Barrett contributed 29 points, 8 boards and 9 assists, while Quickley scored 27 points.

A sensational Julius Randle (46 points and 10 rebounds) guided the New York Knicks to their second straight win away from the Sacramento Kings led by De’Aaron Fox (23 points, 7 rebounds and 6 assists).

The Kings came to win by 23 points shortly before the break, but in the second half they deflated until they sank in a second half of clear New York dominance (52-83)

Cade Cunningham was the best of the game in the 113-110 win with 28 points, 10 assists and 6 rebounds, well supported by 23 units from Jerami Grant. In Atlanta, Bogdanovic was the top scorer with 22 points.

Without paying attention to their position in the East (penultimate), the Detroit Pistons added their third consecutive victory by beating the Atlanta Hawks with great merit and in overtime, who have not quite found their rhythm.

Rookie Cade Cunningham (28 points, 6 rebounds and 10 assists) led the Pistons while Bogdan Bogdanovic (22 points and 6 assists) shone for the Hawks.