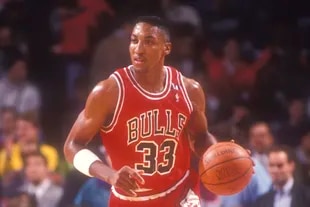 Throughout its history, the NBA had many figures and several of them left their mark for having been part of great teams. One of the stars he had was Scottie Pipen. The Chicago Bulls of the 90s marked a time when he, along with Michael Jordan and Dennis Rodman, formed one of the great “Big Three” of the best basketball in the world. The truth is that after a successful career there is a future that can be difficult and Pippen is the one who seems to be going through a bad time in his life. It is that, despite having obtained six NBA titles, today he must search for money. What is your particular method? Rent your company for a full day for a big dollar figure.

Neiman Marcus, luxury clothing store in the United States, offers as a proposal to know Scottie Pippen in depth in exchange for 333,000 dollars to spend a day with him. Anyone who can put up that sum could have a unique experience with the 57-year-old former NBA player. The total figure is allusive to the number 33 that accompanied Pippen throughout his career in which he wore the jerseys of the Bulls, the Houston Rockets and the Portland Trail Blazers.

“It’s your turn and that of a friend to play against this dynamic duo of father and son and learn one or two unique tricks on the court”, invites the proposal that is all the rage in the United States ahead of Christmas. In addition, that day also includes his son, Scottie Pippen Jr, current Los Angeles Lakers player. In addition, whoever pays that amount will be able to enjoy a private dinner with both family members, a sample of Digits bourbon, a legendary brand, and a signed copy of the Unguarded book, in which the former player talks about his experiences as a professional and of his relationship Michael Jordan with whom he played in Chicago Bulls.

Of course, the full day is within the reach of very few. This luxury can only be afforded by a millionaire who wants to treat himself to meeting the Bulls legend, who earned 110 million dollars in his 18 seasons in the NBA, 23 million in his first 11 seasons and 87 in the last two. The truth is that his economic spending is not the best. Due to this, Pippen is forced to rent for days to obtain extra income and be able to cope with his high pace of life.

It is worth noting that the company that sells this service reported that the former NBA star will donate $278,000 to a school that promotes high academic, business and athletic standards. For those who acquire it, it will not be another day. Pippen, throughout his successful career, played 18 seasons in the NBA. There he won six championship rings with the Bulls. In addition, he participated in seven All Stars, was included in the best quintet of the League for three years and won two Olympic gold medals with the United States basketball team in Barcelona 1992 and Atlanta 1996.

First it was “The last dance”, the documentary that allowed to know a part of the history, of differences, of jealousy, egos and that puts Michael Jordan almost exclusively at the center of the history of that wonderful team. It generated too much controversy among the protagonists themselves, the Bulls themselves. For this reason, in the book Unguarded (“Unmarked”), which is the autobiography of Scottie Pippen, You can already see a kind of counteroffensive from the documentary that puts the legendary Chicago forward as a simple MJ sidekick.

Much has been said about how Jordan disqualified his teammates. He even questioned Pippen wanting to help the Bulls when he suffered a breakdown in the Eastern Conference finals against the Detroit Pistons. In addition, in that documentary he opens a question: if Pippen’s salary claim was fair in 1997. And he exposes it with that situation in which, in a closing of a playoff game against the New York Knicks, during Jordan’s first retirement, he didn’t want to go out and play because Phil Jackson had given responsibility for the last shot to Croatian Toni Kukoc.

At the time, Pippen explained that he didn’t like the way he was treated on “The Last Dance” at all. He even said that he talked about it with Jordan and that MJ gave him the reason why he was stopped in that documentary. “The Last Dance was really more about Michael Jordan than the Chicago Bulls. It was his story. This book is mine”, is the first counterattack that allows us to meet in the synopsis that was published in Simon & Schuster, where it was announced that it will be Pippen’s official book and that it will be released on November 16.

Just a handful of phrases offered on the official page allows us to know the tone of the story. Although this work written in conjunction with Michael Arkush traces Pippen’s childhood in Arkansas and his family relationship, in many passages the focus is on his relationship with Michael Jordan.

“Without Pippen there are no championship flags, let alone six, hanging from the United Center sky. There is no documentary. There is no Michael Jordan as we know him. The Bulls teams of the 90s would not exist as we know them”, is one of the fragments of the synopsis that was published.

The message is clear, there is no room for speculation. Pippen, in his autobiography, tries to clear all those doubts that were always hovering over his image and trying to dismantle everything that was inferred in the documentary: “The six-time champion and two-time Olympic gold medalist of the soft tone finally opens up to offer a clear and transparent vision of Michael Jordan, Phil Jackson and Isiah Thomas, among others. Scottie Pippen details how he was embarrassed to be labeled by the public as Jordan’s teammate, and discusses how he could and should have received more respect from Bulls officials and the media.”

Far from wanting to lower the foam on the controversy with Jordan, Pippen understood that one of the best methods of promoting his work is to announce that he will reveal stories about those Bulls that no one told before and even cast doubt on who was the true leader in the locker room. of Chicago: “Here Pippen reveals untold stories about some of the most famous games in league history and talks about what it was like dealing with Jordan on a day-to-day basis, while serving as the true leader within Chicago’s locker room Bull’s.”

Pippen’s every move on his book was perfectly crafted for attention. He announced it on Twitter and published a phrase that opens a new map within the Bulls dynasty: “Ready to hear my version of events? You will read my thoughts on playing with MJ and Rodman and being coached by Phil Jackson. From a small town in Arkansas to the big moment in the NBA.”

Get to know The Trust Project

Scottie Pippen, the NBA legend who needs money and “rents” to spend a day with him