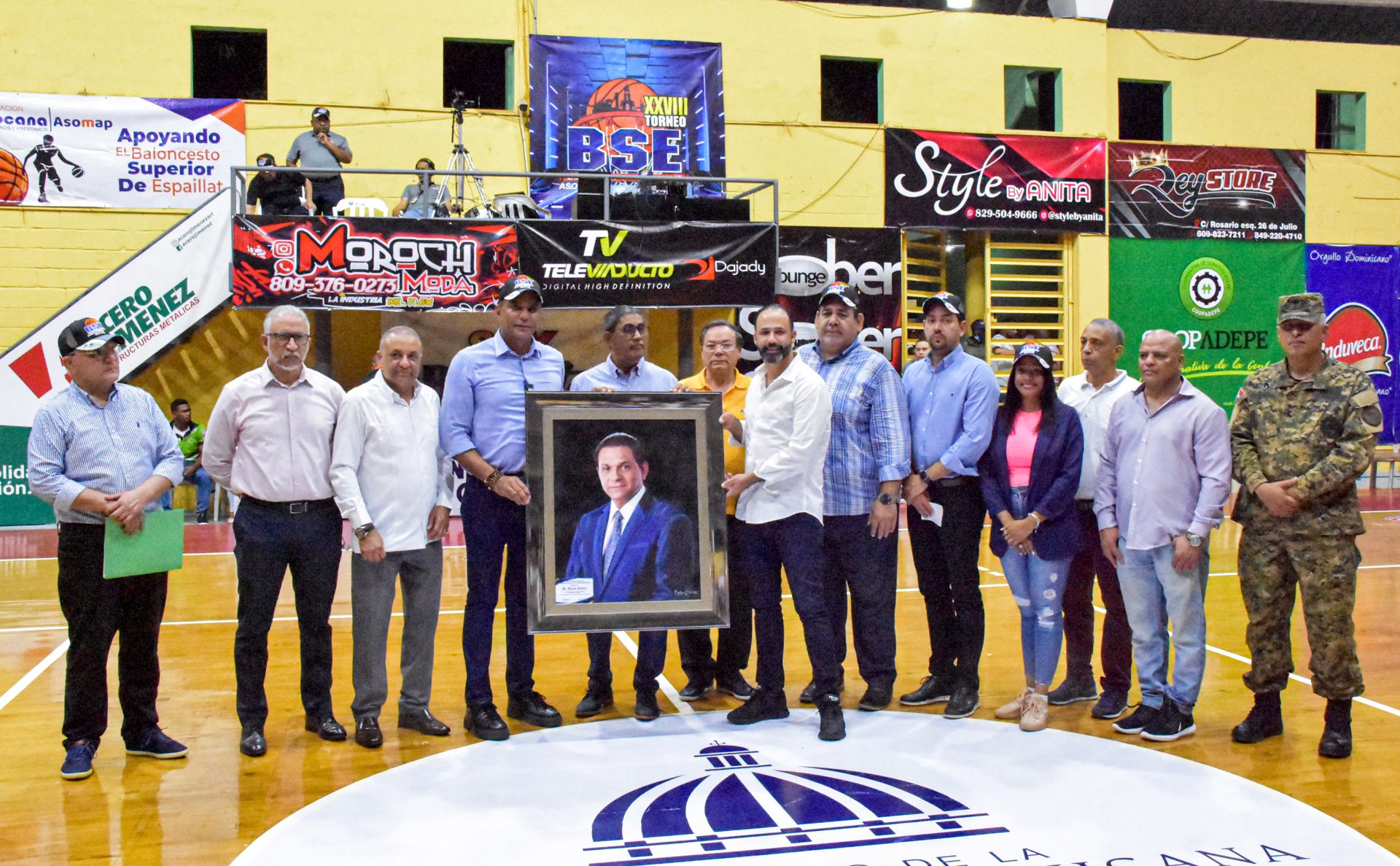 Dr. Robinson Santos, director of the Cabinet of the Ministry of Public Health, received the beautiful plaque of the fair dedicated to the Minister of Health Daniel Rivera, delivered by Carlos Gómez, president of the Organizing Committee and Serafín Arroyo of (ASOBAE). External source.

Mocha. – The San Sebastián and Don Bosco clubs started off with victories on the first day of the XXVIII Espaillat Superior Basketball Tournament (BSE), dedicated to Health Minister Daniel Rivera.

The champions of the past BSE, the San Sebastián club began the defense of their title with a 107×96 victory over the La Cancha club, in the Doctor Rubén Lulo Gitte roof, of the fair that has the endorsement of the Dominican Basketball Federation ( FEDOMBAL).

The first half that was dominated by San Sebastián 58×51, received the offense of six players with double figures, led by Kevin Núñez with 23 points, followed by Timmy Bond 17, Edward Santana and Nargenis Ulloa 15 points each, Kelvin Rodríguez 12 and Jose Rafael de Jesus 10 points.

Don Bosco gets off to a good start

The Don Bosco club won 107×98 in the opening clash against Jose Horacio Rodríguez, guided by the offense of the native Mikael Ureña and a triple double by Devin Brook, before a full house attendance, which enjoyed the start of the Moca BSE.

Those led by Jose García went into the break with an advantage of 56×48 over Jose Horacio, who could not stop the strong offensive of the winners

The opening ceremony began with the words of the president of the Organizing Committee Carlos Gómez, Senator from Espaillat, who urged everyone to take care of Basketball, a sport that can bring multiple benefits to children and adolescents and not only for the physical exercise itself in yes, but because of the values ​​it entails.

After his words, Dr. Robinson Santos, director of the Cabinet of the Ministry of Public Health, received the beautiful plaque of the fair dedicated to the Minister of Health Daniel Rivera, delivered by Carlos Gómez, president of the Organizing Committee and Serafín Arroyo of ASOBAE and the other personalities who they were in the act before the second game of the double day.

The mayor of Moca Guarocuya Cabral and the aldermen Luis Díaz, Billy Almánzar and Serafín Arroyo, donated two hundred thousand pesos to the Organizing Committee and the teams of the XXVIII Superior Basketball Tournament of Espaillat (BSE).

In addition, Mr. Pablo Grullón, president of Televiaducto SRL, together with Francis Diaz, manager of the company, also gave two contributions, one to ASOBAE for the development of all the minor categories and the second an advance for marketing to the four clubs and also an incentive to the tournament champion team

Prior to the start of the second game between San Sebastián and La Cancha, an honorary kick-off was carried out by Dr. Robinson Santos, director of the Cabinet of the Ministry of Public Health. Father Jose Cuello performed the blessing of the event. Also, all tickets for the first day are courtesy of the Industrias Macier company.