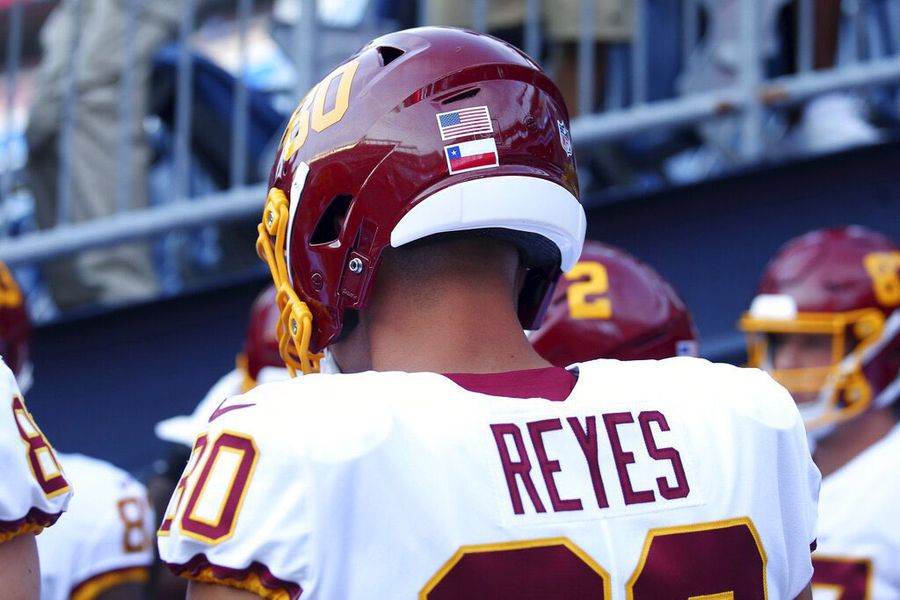 Third quarter of the game between the Washington Football Team and the New England Patriots. WFT quarterback Steven Montez receives the ball. Move to the right, make a feint and find your receiver. Throw fast and the oval finds the safe hands of Sammis Reyes, the first Chilean to compete in professional American football in the preseason of the prestigious NFL.

It is the beginning of a new dream. The reception is not the most distant. The four yards achieved are minimal (although the difficulty is that he was glued to the line) compared to all the way that the 25-year-old national athlete had to travel to get there and catch that ball.

On some of the occasions he was very accurate blocking and also projected towards the rival field as a good pass alternative, taking advantage of a couple of shipments from Steven Montez: the aforementioned four-yard short and another of 21.

His performance had good comments from his coach, Ron Rivera, who spared us praise. “Yesterday we saw the results of what it can be. He may be our most physical tight end ”, He highlighted, along with adding that he liked what he saw and stressed that he only “sees progress” in his pupil, although he warned that he would like Reyes to catch the ball “a little cleaner.”

Meanwhile, the specialized media also highlighted his performance. “In his first game in the NFL, former Chilean basketball player Sammis Reyes looked solid. The tight end played with the third offensive team, endured as a blocker and was comfortable running the routes. He caught a short pass from quarterback Steven Montez for four yards and they also threw him another pass that he couldn’t catch after sliding, “wrote the Washington Post.

While the specialized site Hogs Haven, through its commentator Mark Tyler, highlighted the work of the national athlete. “Ok, I know he had to catch a ball twice… but guess what: he caught it! Other than that, he had a good catch on a pitch where he was hit by a safety, but it was Reyes who caused the pain. He also showed solid effort as a blocker on the carry plays. Maybe he lacks polishing, but it was a good start to his first NFL game. And he looked MUCH better than Hemingway! (Temarrick, the Chilean’s direct rival for a place on the final payroll)! ”.

Meanwhile, the NBC network added: “He had never practiced the sport until a few months ago, he moved the chains with his own reception.”

His beginnings in sports were far from the grass courts. It was basketball that initially attracted the Talcahuano-born and took him to the United States with the idea of ​​becoming one of the stars of the NBA.. Her height of 1.96 meters could occupy her in good shape in the discipline and to achieve the goal she had to go where the stars shone. Among them LeBron James, who inspired him both professionally and personally.

But the jump in the sport of the hoop did not come despite his performances at the secondary and university level where he managed to defend the Tulane, the NCAA I team.

There, the figure of Justin Kavanaugh stands out, a talent recruiter who motivated him to follow the line of American football taking advantage of its natural conditions and thus return to focus on high-performance sports: Joined the International Player Pathway Program that seeks to give international players opportunities within the league, allowing them to join the practice teams of different franchises.

It was in this program that he began to stand out, drawing attention at that time to Scott Pioli, the former General Manager of the Kansas City Chiefs and Vice President of Personnel of the New England Patriots for the years 2001 and 2008, by their numbers, among them a 40-yard dash in 4.65 seconds and a 40-inch vertical jump.

Finally his effort, perseverance and sacrifices saw a first prize on April 13 of this year, the day on which the Washington Football Team announced him as his newest addition as a tight end (tight end) in a tweet in which he was seen signing the respective contract.

A story that even led him to be the cover of the prestigious Sports Illustrated medium in which they dedicated a report on his life story that took him from basketball to the highest American football competition on the planet.

“Sammis and the path never taken” was the title of the publication that highlighted that “Every rookie has an origin story, but no one has one like Reyes: in a new continent, a new language, and now a new sport.”.

The Chilean who played the match with the shirt number 80 achieved the second-best record of yards completed with 25 on two catches, five fewer than running back Jaret Patterson, who did it on four plays.

Now Reyes’ work will have to focus on maintaining the good numbers to be considered by coach Ron Rivera for the regular season. The coach must reduce the roster of 90 players to 53 by August 31. The first game for the league will be played on September 12 against the Los Angeles Chargers.