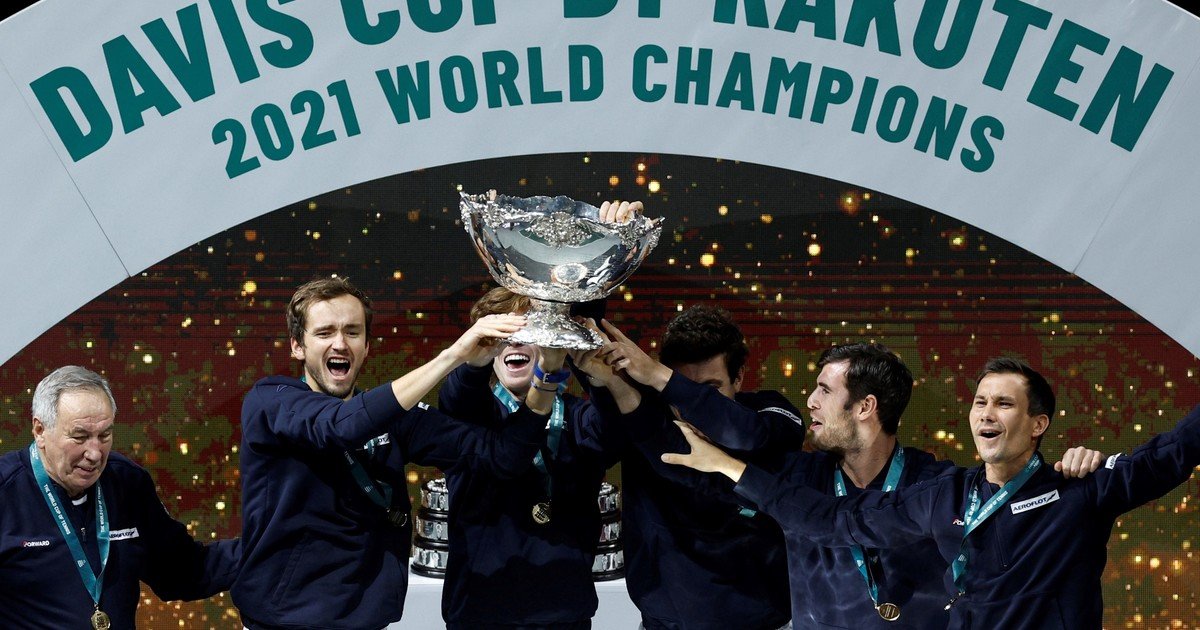 Days after the start of Russia’s invasion of Ukraine and the first bombardments of the capital Kiev and other cities, the International Olympic Committee recommended that “Russian or Belarusian athletes or officials are not invited or allowed to participate in competitions around the world”who should be accepted only as “neutral athletes or teams.” The international federations listened to the suggestion and in a matter of hours, Russia was marginalized from world sport. The last to turn their backs on the powerful nation of Vladimir Putin were athletics, tennis, basketball, volleyball, World Boxing Council (WBC) and rugby. The motoringfor the moment, took a Intermediate position.

World Athleticsthe world governing body for athletics, has resolved to “exclude from all World Series of Athletics events for the foreseeable future, with immediate effect, all athletes, support personnel and officials of Russia and Belarus.” .

Russia had already been suspended since 2015 for doping violations, however its clean athletes could compete as neutrals. From now on, they won’t even be able to do it with that status.

The World Athletics Council has today agreed to impose sanctions against the Member Federations of Russia and Belarus as a consequence of the invasion of Ukraine.

“The world is horrified by what Russia has done, aided and abetted by Belarus. World leaders tried to prevent this invasion through diplomatic means, but to no avail in the face of Russia’s unflinching intent to invade Ukraine. The unprecedented sanctions being being imposed on those two countries seem to be the only peaceful way to disrupt and defuse Russia’s current intentions and restore peace,” said Sebastian Coe, president of the organization.

The three organizations that govern world tennis, the ITFthe ATP and the WTAshowed a united front and issued a joint statement, in line with the IOC recommendation.

The ITF board of directors made a real splash. Because it determined to suspend the federations of Russia and Belarus and prohibit them from competing in any team competition governed by that organization, including the Davis cup. Thus, the Belarusian team will not be able to play the playoff series that was due to play against Mexico this weekend. And the Russian will stay out of the Finals (September and November), for which he was already classified as the current champion.

Nor will the Russians be able to defend the title of the billie jean kingwhich they conquered last year.

On the other hand, the ATP and WTA decided to cancel the joint tournament that they were to play in Moscow in October. And, finally, it was announced that all the players from those two countries will be able to continue competing in the events of the different circuits and in the Grand Slams, but not under the flags of their countries.

Joint Statement by the International Governing Bodies of Tennis

The International Basketball Federation made a similar decision. “In line with the resolution and reasoning of the International Olympic Committee, FIBA ​​today announced that Russian teams and referees will not be allowed to participate in FIBA ​​and 3×3 competitions. FIBA ​​categorically condemns the violence and urgently wishes peace to prevail,” it reported.

At the national team level, the Russians will thus not be able to play the third qualifying window for the 2023 World Cup (against Italy on July 1 and Iceland on the 4th), the Eurobasket in September and the Women’s World Cup in Australia from the 1st. October.

The International Volleyball Federation (FIVB) announced on Tuesday that it took away from Russia the organization of the Men’s World Cup, which should be played in August and September, and that it will soon announce a new venue.

“Since Russia’s military invasion of Ukraine, the FIVB is very concerned about the aggravation of the situation, and about the safety of Ukrainians. The board of directors came to the conclusion that it would be impossible to prepare and organize the world championships in Russia due to the war in Ukraine,” the agency said in a statement.

Over the weekend, France, winner of Olympic gold in Tokyo 2020and Poland, current world champion, had warned that they would boycott the event if Russia remained as host.

Argentina, bronze in the Olympic event that was played last year, integrates together with Iran, the Netherlands and Egypt the group F of that tournament, which was to be played in Krasnoyarsk.

A few hours later, the FIVB further reported that “all beach volleyball and snow volleyball national teams, clubs, officials and athletes from Russia and Belarus will not be allowed to participate in any international or continental events until further notice,” effective immediately. .

The body reiterated that it “remains very concerned about the ongoing war in Ukraine and its terrible impact on the lives of so many and stands in solidarity with the volleyball community and the people of Ukraine, and sincerely hopes that a peaceful solution can be found urgently.” “.

WorldRugbythe international federation of that sport, held an emergency meeting of its Executive Committee, which approved “the full and immediate suspension of Russia and Belarus from all international rugby and cross-border club rugby activities until further notice” and “the suspension full and immediate membership of the Russian Rugby Union as a member of World Rugby until further notice.

That decision will directly affect the European Championship of that sport, which began in early February, will end on March 20 and will finish defining the qualifiers for the 2023 World Cup in France. Russia had three games still to play, against Georgia , the Netherlands and Portugal, the latter still with a chance of securing a place in the ecumenical event.

The federation explained that it made the decision “taking into account the interests of the values ​​of solidarity, integrity and respect for rugby.” And he reiterated “his condemnation of Russia’s aggressive invasion of Ukraine and the permissiveness of this action by Belarus” and his full support for Ukraine.

“The global rugby family is united in solidarity with all those affected by these deeply disturbing events and joins the global community in calling for the restoration of peace,” he said.

The FIVB and World Rugby thus joined a long list of federations and organizations that decided to follow the advice of the IOC.

The World Boxing Council (WBC), through its president, the Argentine Mauricio Sulaimán, announced that will not endorse fights with Russian or Belarusian boxers until progress is made in the peace process.

“We have decided that we will not sanction performances with Russian and Belarusian boxers. It is a terrible decision, but necessary to show that the world of sport, boxing and that we all want peace “Sulaiman assured.

The International Automobile Federation (FIA) also manifested this Tuesday, although in an intermediate position similar to that taken by FIFA in the first instance: its president, Mohamed Ben Sulayem, announced that will allow Russian and Belarusian drivers to compete in their races (including the Formula 1), as long as they do not use flags or symbols of their countries.

Regarding the teams, they will not be able to participate in FIA competitions, but the drivers, such as Nikita Mazepin in Formula One, that they will be able to continue racing without, yes, use the flag of your country, nor symbols or colors that can be related to it. Instead they will have to be under “the FIA ​​flag”.

Nikita Mazepin will be able to compete. Photo: REUTERS/Hamad I Mohammed.

The International Swimming Federation (FINA) canceled a few days ago the Junior World Cup in that discipline that was scheduled to be held in August in Kazan and assured that “it will not hold any event in the future in Russia if this serious crisis continues.” According to the organization’s calendar, that same city should host the Short Pool World Cup in December.

This Tuesday, in addition, he announced that he decided to withdraw from Putin the Order that he gave him in 2014 and that swimmers from that country and Belarus will only be able to compete as neutrals. In addition, he stated that he will continue to monitor the situation and did not rule out taking further action.

FIFA, in agreement with UEFA, suspended until further notice to Russian teams and all their selections from current international competitions, including the Europe League and the Qatar World Cup.

The International Hockey Federation (FIH) decided to exclude Russia from the Junior Women’s World Cup to be held from April 1 to 12 at the University of Potchefstroom, South Africa, in order “to protect the integrity of world sports competitions and for the safety of all participants”. The Russians were going to be rivals of the lionessescurrent world champions, in group C, which also includes South Korea and Uruguay.

The FIH had expressed earlier last week its “full solidarity with the members of the Ukrainian hockey federation at this terrible time.”

The World Rowingthe world governing body for rowing, confirmed that it “will not allow the participation of Russian and Belarusian athletes and officials in any of its international competitions, effective immediately and until further notice.”

A similar decision was made by International Ice Skating Unionwhich implies that neither Anna ShcherbakovaOlympic figure skating champion Beijing 2022nor his companion kamil valievawhich was the center of an unsolved doping case during the Chinese Games last month, could take part in the World Cup, which will be held at the end of March in Montpellier.

The International Ski Federation (FIS) announced that “it will not allow the participation of Russians and Belarusians in its competitions until the end of the current season.” While the badminton tournament canceled all the tournaments planned in Russia, it assured that it will not award any more events to that country and Belarus and determined that in all its events the flags will not be displayed nor will the anthems of those nations be heard until further notice.

With every hour that passes, the sanctions continue to appear and Russia is left more and more outside the world sports calendar.