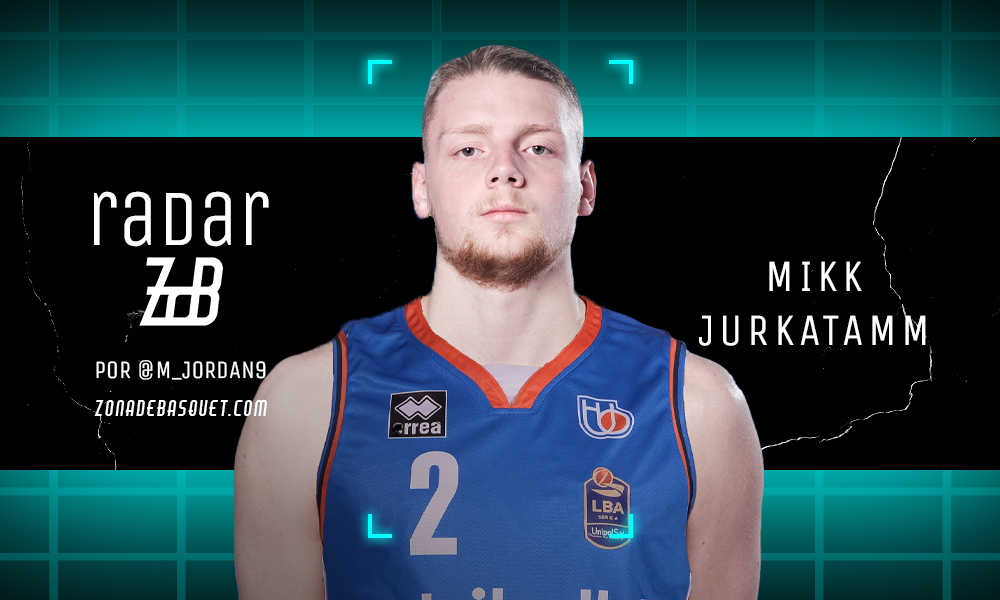 full turn in Radar ZdB. We go to the Baltic countries to talk about the Estonian absolute international Mikk Jurkatamm (2000 / 196cm), who is confirming this campaign what has always been known: that he is a total scorer. The shooting guard was at a very high level on his return to his country’s league (EstLatBL), leaving a few days ago to return to Italian basketball, where he has a quota status due to his training in the transalpine country.

Formed in the ranks of one of the most prestigious farm-teams in Estonia such as Audentese, Jurkatamm began to attract attention with his team both in the Nordic championships and in the European Cadet Championships in 2016, which made the prestigious Virtus Bologna join their quarry in 16/17. Two courses in the junior team, with a very outstanding performance at the ANGT Hospitalet on 17/18 (19.0 pt, 4.3 re), would make him go professional, deciding to continue in Italy.

His first experience would be a loan from Virtus to Ravenna (Serie A2, 18/19), fulfilling his first senior year (13 mi, 4.4 pt) and being fundamental for Estonia U20 in European B 2019 (12.6 pt, 3.5 d), repeating assignment in the same team and category on 19/20 with the same role (18 mi, 4.8 pt, 2.3 d), in a year that, due to injury, began in mid-October and that the pandemic stopped. The turnaround came in 2020/21, because when he seemed determined to head for the NCAA (it was announced until his signing by Western Kentucky in different media), the sometimes complicated regulations of the university prevented his landing, signing in January 2021, already free of contract with Virtus, in the Italian Serie A2 (Cento: 17 pa, 16 mi, 4.5 pt, 2.6 re). Last summer he changed thirds and returned home to sign for TTÜ KK, where he was being one of the sensations (14 pa, 15.6 pt, 4.9 re, 2.4 ace, 1.5 ro) before signing this week for Treviso Basket of the highest Italian category. In addition, he participated in the FIBA ​​windows with his national team (14 min, 7.0 pt).

We are talking about a player who has clearly received a specialist shooter role from a young age. We are facing a shooting guard with a good understanding of the game, but who is not physically very powerful. Such a killer from the triple, very comfortable waiting in situations of catch and shoot or coming out of blocks, and not having problems receiving “bad balls” at the end of possession to nail from the triple (even from 7-8 meters). In addition, he has good individual technique, with good touch on the ball, which makes him capable of scoring from outside with the ball. But beware, because he does not renounce penetrations, being a player who reads when it is the best option for it and with a repertoire of feints to deceive his defender, although it is rare to see him seek contact near the rim, preferring the pull up from the middle distance. He also knows how to continue the ball and read the game, hence his average assists.

Such a smooth scorer with great size and good feel for game.

Watch out for Estonia in next decade, so many talented players up there pic.twitter.com/ZiAYCZ32M9

As a good shooter, he can be doubted defensively, but he is attentive to passing lanes, has good mobility and helps on the rebound. Among his weaknesses, in addition to the physical plane, he must sometimes improve his throwing criteria (it is true that when he goes on a streak he destroys a game) to seek more contact when he penetrates; back, you could improve your level of contact and foot positioning.

In short, Jurkatamm continues to be that shooter of all time who, when they have given him confidence, has made it clear that his speed and shooting efficiency are top. Capable of giving continuity in attack, due to his good I.Q., and with quality technical flashes, it remains to be seen if his physique and work at the back can evolve to become a player in the leading leagues in Europe.