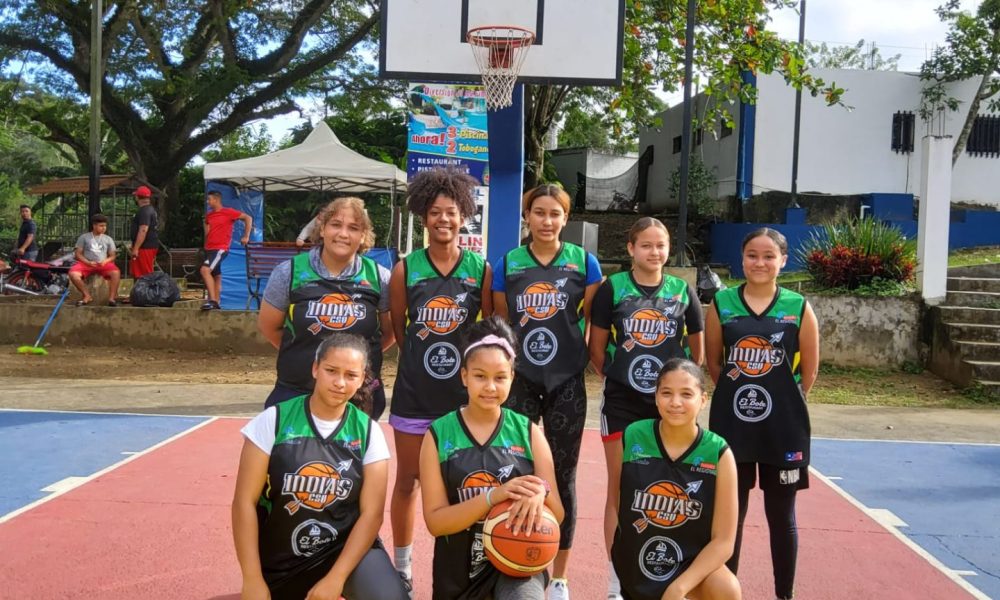 Members of the Black and Green team that managed to win the internal Christmas U18 women’s basketball tournament of the San Vicente club held in the municipal district of Jaya. External source

JAYA, San Francisco de Macorís.-The Negro quintet defeated the Blues 58-43, crowning themselves champion of the U18 women’s Christmas basketball tournament of the San Vicente de Paúl club, which was successfully held in this municipal district with the new breed of players from the sports entity’s development league.

The Negro team prevailed in the last two sets, after losing the first half 23-21 with a combined effort by the versatile Lismerly Rodríguez and Awilda Eutate.

The one sponsored by the francomacorisano resident in New York Arquimedes Abreu won the second half with a wide score of 37-20 taking advantage of personal foul problems of the main players of the blue team.

The best scorers for the winners were the stellar Yeneiry Rosario with 26 points, Elisandra Santos scored 13, Albely Polanco scored 10, Diana Rodríguez with 7 and Radelkys Mercedes with 2.

For the blues the best scorers were Ruth Esther Geraldino with 20 points being escorted by Awilda Eutate with 12, Lizmerly Rodríguez scored 5, Solanyi Paulino with 4 and Daniela Camilo with 2.

Professor Pedro Emilio Reyes, coordinator of the Indies of the San Vicente club, highlighted the success of the Christmas intramural category U18 that served as preparation for the third superior tournament with reinforcements scheduled for the month of April of this year.

It meant that in the coming days academies will be opening in various sectors of the municipality of San Francisco de Macorís with the aim of relaunching women’s basketball in the Duarte province with a great program that will be supported by renowned businessmen and friends of basketball based in the city from New York as well as from this city.

He thanked the young people living in the city of New York Arquimedes Abreu, Alejandro Romano (Canillista), Luis Manuel Rosario Then (Papolin), Héctor Mena (Chichi), the boat restaurant, Wanda fishmonger and newspaper El Regional for the tournament to take place without any inconvenience.

“We are grateful for the help of these former athletes based in the United States who donated the impressive sublimated t-shirts so that the girls could wear them in this development event where the great level reached by these young women was notorious despite the little time they have in practice. of basketball, ”Reyes asserted.