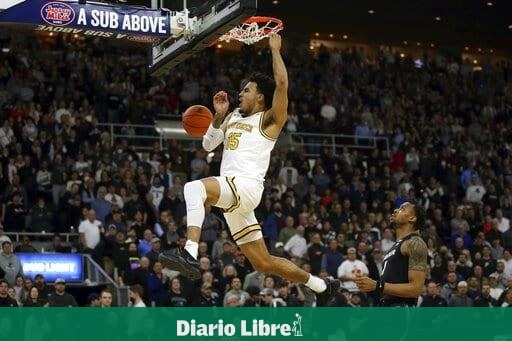 Now it only remained to tell his father.

It was not an easy task. Her father is not one of those little league fathers. Is Omar Minayathe general manager who almost took the Mets to the World Series. And before that, the first Hispanic general manager in major league history, with the Montreal Expos.

Needless to say, Justin spent his childhood swinging a bat and running the bases. His passion for basketball came later.

“As a child, baseball was my favorite sport. He wanted to play in the big leagues. To be like José Reyes,” Justin declared.

A scout at heart, his father Omar says Justin was a left-handed pitcher with a good arm who could field balls in center field.

But in high school he hit a tremendous growth spurt, reaching 1.98 meters (6 feet 6). Around that time, his uncle James Albright, passionate about basketball and Bryant in a baseball family, passed away.

“Uncle Jay” passed on his passion for basketball.

“I loved him very much. He made me dedicate myself to basketball, ”says Justin.

Justin continued to grow and focus on basketball. He realized that he had to quit baseball.

“To play at a high level, you have to train and work hard,” said his father, who played for a time in the minor leagues but never got very far as a player.

The day came when Justin showed his face and told his father what he felt.

“I was a little nervous at first. But he had no problem. He said that he wanted me to achieve everything he set out to do in basketball,” Justin said.

Minaya Sr., in fact, gave him his full support at his home in New Jersey.

“When I told him what I wanted, he sacrificed everything,” Justin recounted. “If he wanted to practice shooting late at night, he would go with me. He went to the gym with me. If you had to get up at five in the morning for a game, he would wake me up. He always supported me. It’s something I’m very thankful for.”

Justin was not wrong to bet on basketball.

He had four good years in South Carolina and this year moved to Providence, where he and another newcomer, Al Durham, hit it off with the team’s veterans.

“I knew an assistant coach from South Carolina. We worked a lot with him, we made a lot of calls. One day we spoke via Zoom and I was delighted with him. We needed another player who could play multiple roles, 6-6 or 6-7 (about two meters),” said Providence coach Ed Cooley, named Big East coach of the year. “We wanted him with us.”

“Things went well. He is one of the nicest guys. He never has a bad day. He has a nice smile, good spirits, he is a great partner. Honestly, he is the prototype player that I want with me.”

Versatile player who contributes many minutes and does a bit of everything, Minaya often marks the best rival striker, wherever he plays. He averaged 6.6 points and 5.7 rebounds per game and helped Providence win its first Big East title in 43 years. He is now preparing for the great NCAA tournament.

His presence was never more important than in the final minute of Providence’s 65-61 victory over Butler in the Big East quarterfinals on Thursday, in which he made two phenomenal saves that preserved his team’s lead.

“Not everything is talked about that should be talked about him. To me he is the best defender in the Big East,” Durham stated. “It’s fundamental. He does a lot of things that don’t show up in the stats.”

“Honestly, having him is a dream,” Cooley said. “I feel like I’ve known him forever. His parents are very good. He motivates himself. He likes directing it. We would never have gotten to where we are without him. It is a jewel”.

Omar MinayaOf course, he was in the stands, watching his son play for the second time at Madison Square Garden.

“It’s funny because I always watched baseball. He is now the most passionate figure for the Big East that I know. The only thing he does is watch college basketball, read articles about college basketball,” Justin says. “With my mother we laugh because she has it on her iPad, on television, on the phone. Watch three games at once.”

Minaya Sr., 63, who was also senior vice president of baseball operations and interim general manager for the San Diego Padres, was hired last month by Major League Baseball as a scouting consultant.