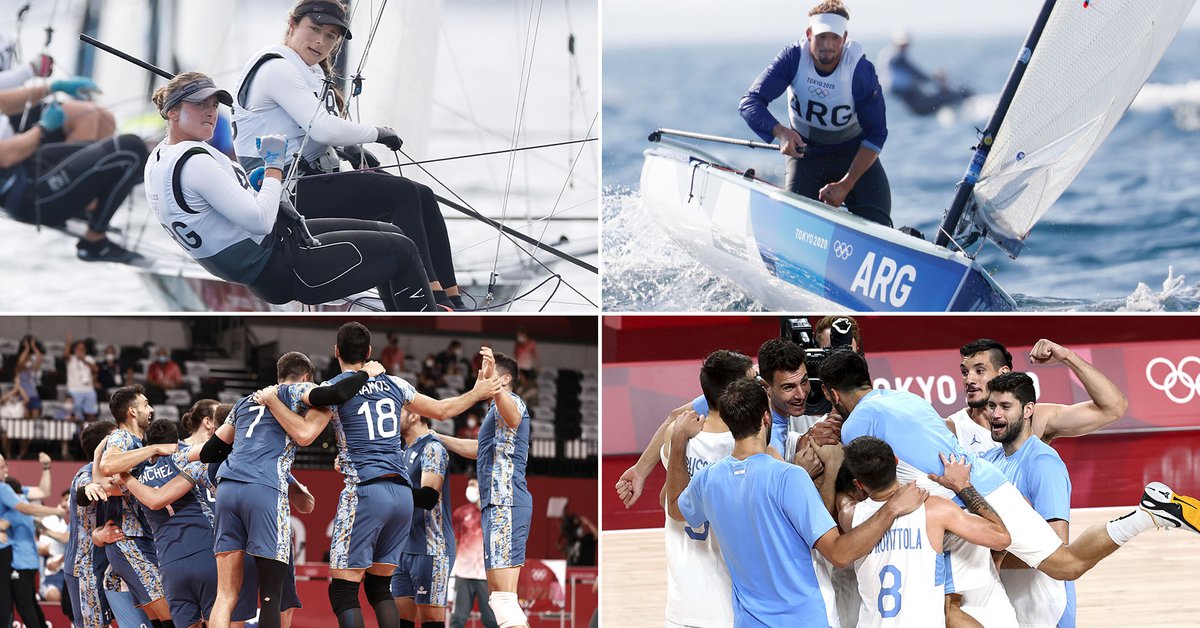 While the Argentine boats will be sailing for a medal, volleyball and men’s basketball will go through the classification to the semifinals

The Tokyo 2020 Olympic Games begin their definition stage and Argentina is waiting for what may happen while sailing, which historically have given the country medals. But it is not the only thing, since in Canotaje Vernice will seek the same goal, in addition to the men’s volleyball and basketball teams, who will go through the semifinals.

The first to participate will be Agustín Vernice for the semi-finals of the K1 1000 meters in canoeing. The 26-year-old paddler from Buenos Aires obtained second place in his series, in the so-called Sea Forest Canal in the Japanese capital, and was saved from participating in the quarterfinals.

Vernice won the gold medals in the last Pan American Games Lima 2019 (K1 1000 and K2 1000, along with Manuel Lascano). The kayaker from Buenos Aires also won the title in the Sub ’23 World Championship in Pitesti (Romania) in 2017. He also obtained a seventh place in the Czech Republic (2017) and a ninth in Hungary (2019), in two Senior competitions.

Already in the early hours of Tuesday, it will be the turn of sailing competitions, with large Argentine participation and seeking to maintain discipline in the medal table for the seventh consecutive Game since the Corrientes Carlos “Camau” Espínola (Mistral class) inaugurated the harvest in Atlanta ’96. Sailing, with 10 medals (1 gold, 4 silver and 5 bronze), is the second most profitable sport for the country in Olympic history after boxing (24).

The duo María Belén Tavella and Lourdes Hartkopf will be the first to participate, but they will only comply with the agenda in class 470, since they do not have a mathematical chance of qualifying for the last regatta that brings together the ten best boats (00.05 hours).


From 00:33, Victoria Travascio-María Sol Branz will face their last chances of aspiring to a medal in the 49er FX division after completing the 12 regular races in sixth place in the general classification. The medal race gives double points, so the Argentines with 88 accumulated points need to win to deduct a difference of 15 units from the German team, which must finish ninth. In addition, the Argentine boat will have to wait for Great Britain to finish fifth down and for Spain to place seventh to reach the bronze medal.

Then, starting at 2.33 in the morning, Facundo Olezza will try to get hold of a medal in the Finn class. After 10 races, the Argentine entered the medal race in sixth place (52 units in total) and is 13 points from the bronze medal zone, and two from the silver medal zone. To be able to add a medal in Tokyo, Olezza must win and that Spain finish eighth and New Zealand does not get on the podium.

The Argentine sailing activity will close with the participation of the Olympic champions Santiago Lange-Cecilia Carranza Saroli for the medal race in Nacra 17, but with no chances of reaching the podium. The Argentine team was the bearer of the national flag at the Tokyo 2020 opening ceremony. Lange, 59, is making his seventh appearance at the Games, winning a bronze medal in Athens 2004 and in Beijing 2008 with Espínola in the Tornado class, and the gold class in Rio 2016 with Carranza, who gave the present for the fourth consecutive time (Beijing 2008 and London 2012, in Laser Radial, Rio and Tokyo in Nacra 17).

After his resounding 3-0 win against the United States, the Argentine men’s volleyball team will face the quarter-finals against Italy (second in Group A with four wins and one loss) starting at 5 in the morning. Marcelo Méndez’s team played at the highest level against a power like the United States, a bronze medalist in Rio 2016 and fourth in the world rankings, and is excited to surpass the performance in Rio 2016 when they fell in the quarterfinals against the host and then champion , Brazil.

The path of the national team in these Games began with a defeat against Russia (3-1) and a painful fall in a great 3-2 game against Brazil -current Olympic champion-. Set albiceleste He recovered to these blows and with authority he won a very good match against France 3-2 and then added his second victory against Tunisia (3-2) after reversing two sets down. The last stumbling block for Argentina in Group B, one of the most difficult, was the United States.


The Argentine men’s basketball team will be measured from 9 o’clock against Australia in search of the semifinal that will have the winner of Spain-United States in the same key. The quarterfinals are completed with Slovenia-Germany and France-Italy.

The Soul reached this instance of the Olympic competition by clearly defeating Japan by 97-77, in a match corresponding to the last date of Zone C in the qualifying stage. The selected albiceleste that directs the DT Sergio Hernández obtained the classification like one of the best third parties, whereas the other was Germany.

Simone Biles is entered for the balance beam final at the Tokyo Olympics
He fell in the knockout heat of 1,500 meters and came last, but ended up winning the race – the most shocking comeback of the Olympics.