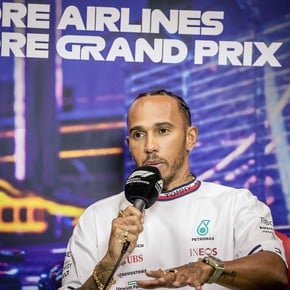 A new season of NBA It will begin on October 18, but first, the teams will play a series of preseason games, which serve to finish defining the teams to face the competition. With Leandro Bolmaro already confirmed in the template Utah Jazzthe one who must earn a place is Luca Vildozawhich does not have guaranteed permanence in milwaukee bucksbut these encounters will be key for it to show itself. This preseason will once again have games outside the United States and Canada, which has not happened since 2020 due to the pandemic.

This year, the NBA preseason will feature games in Japan and Abu Dhabi. At the start of this instance, which will be this Friday, they will play in Saitama, north of Tokyo, Golden State Warriors against Washington Wizards, and next Sunday they will meet again. Both matches will be at the Saitama Super Arena and both tickets are already sold out.

The Warriors are already trained in Japan (AP).

Japanese fans will fill the stadium to see the latest NBA champion and also Rui Hachimurathe Wizards forward who in 2019 became the first Japanese-born player to be selected in the first round of the NBA draft. Then, in Abu Dhabi, they will meet on October 6 and 8, Milwaukee Bucks vs. Atlanta Hawks.

​Luca Vildoza will have a difficult challenge during the preseason, to impress the Bucks so that they make a hole for him in the list of 15 players already guaranteed in the team. The point guard, who was waiting to sign his contract, was hurt when the Milwaukee team sealed forward Jordan Nwora in the 15th and final signing.

Vildoza has to earn a place in the Bucks.

This leaves a complicated panorama for the man from Mar del Plata in the Bucks, They already have the point guard position covered with Jrue Holiday, George Hill and Jevon Carter. The good news for the Argentine is that in the preseason everyone usually has minutes, and can also be displayed on the training ground. Vildoza will have to convince Mike Budenholzer, coach of Milwaukee, that he deserves to be part of the squad in the regular phase.

The Bucks will play five games in the preseason, the first against memphis grizzlies this Saturday, then he will have two in a row against the Hawks in Abu Dhabi, on October 11 he will face chicago bulls And finally, you will face Brooklyn Nets The 12. In the event that Vildoza does not have a place in the team, Baskonia of Spain is interested in repatriating him.

​The Cordovan, who will take the 10 of the Jazz, for now is the only Argentine who will compete in the NBA. “My dream was to play in the NBA. I’m happy to have arrived, but now I want to stay for a long time,” said Bolmaro, who is protected by another year of guaranteed contract. Of course, of the four seasons he signed for, for a total of $11 million, the last two are listed as a team option. Therefore, the forward will have to earn the spot to stay in Utah. If not, he will be traded or declared a free agent.

Bolmaro was already presented in the Jazz (AP).

The advantage for the 22-year-old Argentine is that, although Utah fought for the lead in recent seasons, he no longer has who his figures were (Donovan Mitchell, Rudy Gobert, Bojan Bogdanovic, Joe Ingles). Therefore, today the Jazz are a team under construction, even their coach is a rookie (Will Hardy, comes from being an assistant in Boston), this can benefit Bolmaro, since he can get more minutes.