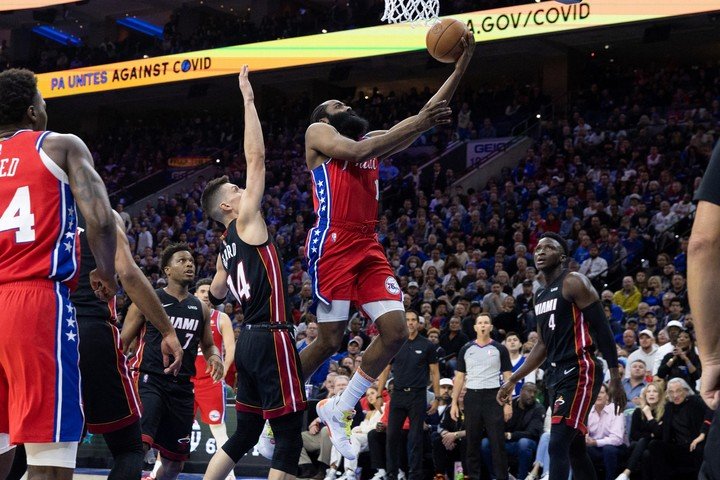 The Dallas Mavericks and the Philadelphia 76ers They won this Sunday at phoenix suns Y Miami Heatrespectively, and matched their conference semifinal series from the NBAon a day marked by controversy in the stands.

In Philadelphia, the star james harden scored 31 points and the Cameroonian Joel Embid He had 24 points and 11 rebounds for the local Sixers to beat the Miami Heat 116-108 to tie this Eastern Conference semifinal series at 2-2..

Harden’s picnic against the Heat.

The Heat won the first two games in Miami with Embiid sidelined with a right orbital fracture and minor concussion. The Sixers won the following home games with Embiid wearing a protective mask. Game 5 will be Tuesday in Miami.

If the Heat can’t figure out Harden and Embiid, possibly the next thing they face could be watching the season on TV. Miami nibbled on the lead and pulled within five until Harden hit his fifth 3-pointer of the game with three minutes left. For Miami, the man with the aim was his star Jimmy Butler with 40 points, but the Florida team missed 28 of 35 three-pointers.

Another good match for Embiid, the man in the mask. (AP)

With Doncic on fire, the story was even

For its part, Slovenian Luka Doncic’s Mavericks beat the Phoenix Suns 111-101 to tie this Western Conference semifinal at two wins by side with a serious incident caused by a spectator against relatives of the veteran point guard of the defeated Chris Paul.

Doncic shone with 26 points, seven rebounds and 11 assists at the American Airlines Center in Dallas (Texas), seconded by forward Dorian Finney-Smith with 24 points and eight rebounds. Devin Booker with 35 points and Jae Crowder with 15 rebounds stood out for the Suns, who they lost Chris Paul to personal fouls with nine minutes left to play. The veteran point guard, who had five points and seven assists, later denounced on Twitter an incident suffered by his relatives in the stands.

Luka Doncic made the difference again.

Thanks to Doncic’s offensive work and Finney-Smith’s effectiveness from long distance, the Mavs hit hard this Sunday. The Mavs knew Doncic couldn’t perform miracles alone. That was the teaching of the first two games of the series, in which the Slovenian scored 45 and 35 respectively but could not prevent both defeats by Dallas. Therefore, it was at the cost of a great collective effort that the Mavericks were able to string together a second victory to even this series. As in the third game, played on Friday in Dallas, Doncic scored 26 points, but only one triple in ten attempts, while Finney-Smith became a sharpshooter with eight of 12, for 24 points.

Dallas smothered Phoenix in the first quarter, winning it 37-25, but the Suns eventually closed at halftime 68-56. In the third, the Suns recovered their overwhelming offensive pace and with a 7-0 attack opening the quarter they got within five points (68-63). However, Dallas regained dominance and Finney-Smith’s three-point basket extended it to 75-63 with seven minutes left in the third. Finney-Smith’s performance was the best of his career in the playoffs, and also the most 3-pointers he has had, both in the regular season and in the postseason.

During the game, family members of Chris Paul were involved in an altercation with a Mavs fan who was ejected. Paul himself made the incident known via Twitter at the end of the match. “They want to fine the players for saying things to the fans, but the fans can put their hands on our families… Damn!” Paul cried.

The point guard, who turned 37 on Friday, was seen talking to court security during the fourth quarter and asked to be excused from the post-game press conference. ESPN reporter Dave McMenamin reported that, according to a person close to Paul, Mavericks fans came to put their hands on the player’s mother and push his wife in front of their children. “They felt very unsafe,” said the source, who was not identified.

Wanna fine players for saying stuff to the fans but the fans can put them hands on our families….fuck that!!

The Mavs later released a statement confirming the incident and attributing it to a single fan who was ejected from the arena. “The Dallas Mavericks are aware of an incident between a fan and Chris Paul’s family,” the Texan team said. “It was unacceptable behavior and will not be tolerated. The Mavericks, along with the American Airlines Center, quickly removed the fan from the game.” The fifth game of this series will be played on Tuesday in Phoenix (Arizona).

The best ten plays of Sunday in the NBA

Program and results of the 2021-22 NBA Playoffs conference semifinals

NBA Playoffs: scandal with Chris Paul on a Sunday of parities