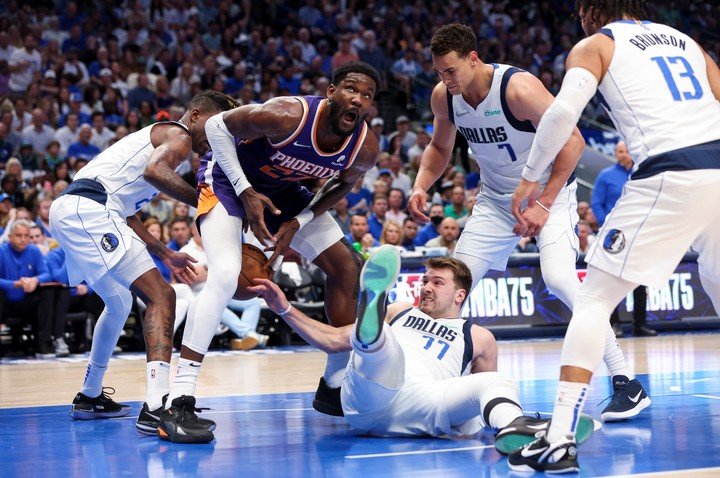 The Dallas Mavericks of Luka Doncić and the Philadelphia 76ers, with the return of JOel Embiidwere strong on their court this Friday to add their first victories in the Conference semifinals of the NBA against Phoenix and Miami. The Suns and Heat, the top seed in the West and East, respectively, continue to lead the playoffs 2-1 on aggregate.

We have a Slovenian, who is wonderful…

In the Western Conference, the Slovenian Luka Doncic led the first win for the Dallas Mavericks 103-94 against the Phoenix Suns. LD signed his third consecutive exhibition in this tie by adding 26 points, 13 rebounds and nine assists before his fans at the American Airlines Center. One of those goal passes was from the free throw line but… Sitting on the parquet!

The only time the Mavericks saw a win in jeopardy was when Doncic went to the bench with eight minutes remaining for his fifth personal foul. “I think they called me some fouls that weren’t. It’s a physical game, it’s the playoffs,” lamented Doncic, who did not stop protesting the decisions of the referees throughout the game.

Confirmed: Doncic doesn’t mind throwing himself on the parquet and getting dirty.

Dallas saw its lead drop from 17 to nine points but Doncic’s return to the court and the Suns’ lack of shooting made it easy for the Mavericks to win. For the first time in the series, the Slovenian phenom had solid offensive support from his teammates, especially point guard Jalen Brunson, who had 28 points and five assists.

The two stars of the Suns, on the other hand, were very subdued in the first game of the series that was played in Dallas. Chris-Paul, the day of his 37th birthday, he had 12 points and four goal passes. In a rare performance, the experienced point guard committed seven turnovers, all of them in the first half, coming just one short of matching his long career record. Squeezed by the local defensive intensity, Paul racked up six turnovers in his first 13 minutes of play, when he’s averaging just 2.4 a night this season.

The Mavericks also contained shooting guard Devin Booker, Phoenix’s main attacking reference, who had 18 points. “The whole team has put up incredible defense and that’s how we always have to play,” Doncic demanded. “If we play like this every game, we will have a chance.”

With Embiid it’s something else

At the Wells Fargo Center in Philadelphia, Joel Embiid came to the rescue of the Sixers to seal a 99-79 victory against Miami and avoid falling behind 3-0, which no team has overcome in playoff history.

The Cameroonian, top scorer of the season, missed the first two games due to a strong blow to the face he received from his compatriot Pascal Siakam in the previous tie against the Raptors. In recent days, the pivot accelerated his recovery from the aftermath of the blow, which caused him a concussion and an orbital fracture. Playing with a mask that protected his face, Embiid had 18 points and 11 rebounds and his mere presence on the court completely reactivated his teammates and fans. “I tried to push as hard as I could, I’m glad we got the win,” Embiid said of his rehab. “I can’t even explain what it was like. Obviously I had a lot of concussion symptoms but I’m glad to be back and to be able to help these guys,” said the center, one of the finalists for the MVP (Most Valuable Player) award of the season.

Joel Embiid and his uncomfortable mask.

On this occasion, Embiid’s contribution to the team was even more valuable emotionally than in the game. Defended by the ferocious Bam Adebayo, the center barely made 12 shots at the hoop (five hits) and lost four balls while trying to adapt to playing with the mask, who retired whenever he could to dry the sweat. “I definitely wasn’t okay tonight,” she admitted. “I was not even close to what I can be. I hope to improve in the next few days.” In addition to head injuries, Embiid is also competing with a right thumb injury that will require him to undergo surgery at the end of the season.

The Cameroonian in the iron mask.

With Embiid limited, the Sixers’ offensive weight was carried by young Tyrese Maxey and veteran Danny Green, top scorers with 21 points. The Sixers’ win, however, was based on their improved defense and the Heat’s mediocre offensive performance., despite the fact that they had veteran Kyle Lowry again. The point guard had 0 points, missing all four of his shots, and 3 assists in 25 minutes. Shooting guard Jimmy Butler was the only good news for Miami with 33 points and 9 rebounds.

NBA Playoffs: Dallas cheers up with a Doncic who attends sitting