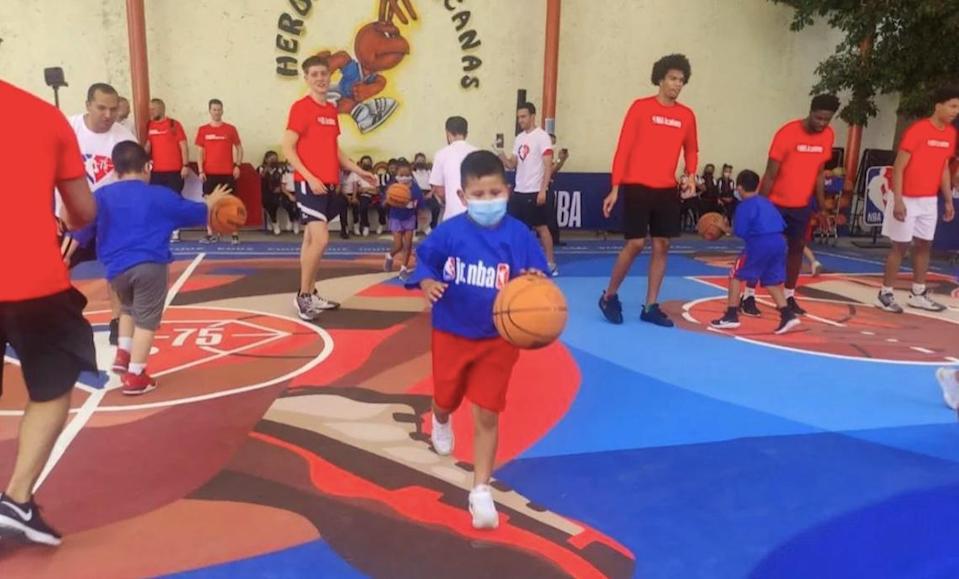 SAN LUIS POTOSÍ, SLP., May 18 (EL UNIVERSAL).- Ignacio anxiously awaits recess time every day, since these are the minutes he can take advantage of to take the ball, throw it over and over again until he takes it directly to the hoop.

He also takes advantage of Mondays and Wednesdays in physical education classes, when his teacher plays games for them and teaches them some exercises to learn the rules of the game and improve their basketball skills.

“Nacho”, -as his friends and family call him- is a basketball fan, his favorite team is the Knicks and one of his dreams could come true during the NBA camp without borders, because there he was able to “learn from the best” .

“I got very nervous but it was a lot of fun, they made us shoot baskets and jump with the ball, the pass and how to bounce the ball correctly,” San Luis Potosí shared with EL UNIVERSAL.

The intention of the NBA and the International Basketball Federation (FIBA) is to inspire the little ones, and through this type of dynamic, to find comprehensive training in basketball, since the “rules” and learning that are acquired in the court can be transferred to everyday life, according to the words of Raúl Zárraga, director of the NBA in Mexico.

“Hopefully tomorrow talent will come out of here for the NBA, the national team or any other league, but the important thing is that boys and girls find complete social integration in basketball.”

Within the framework of the 75th anniversary of the American league and the 11th edition of the Camp without Borders in which 65 children from Potosí participate, the sports organization chose the Heroínas Mexicanas school to intervene its field and capture an inspirational message for children, there At the back of the campus, it is where Nacho runs to play after finishing his homework.

In addition, a computer room was equipped and shared training was developed between children, players and NBA coaches.

“We, as the court says, are: you have the girl on one side and a basketball player in the center and the children seeing in the center what they want to be tomorrow and can continue practicing basketball,” Zárraga said.

“Nacho” is convinced that his biggest dream is to become a professional basketball player, and after sharing the court with NBA players, he feels that he is on the right track, since his inspiration is Leandro Bolmaro and Chris Duarte, who They began their passion for this sport after participating in the same NBA camp.

Finally, the director of the NBA shared a message with parents, to always put the happiness of the children first.

“Many times we want our children to be number one, the champion, the one with the medals and we forget to ask them what they want; what I invite them to do is the parents, let them have fun, that the love for the sport comes out to them”, he concluded.