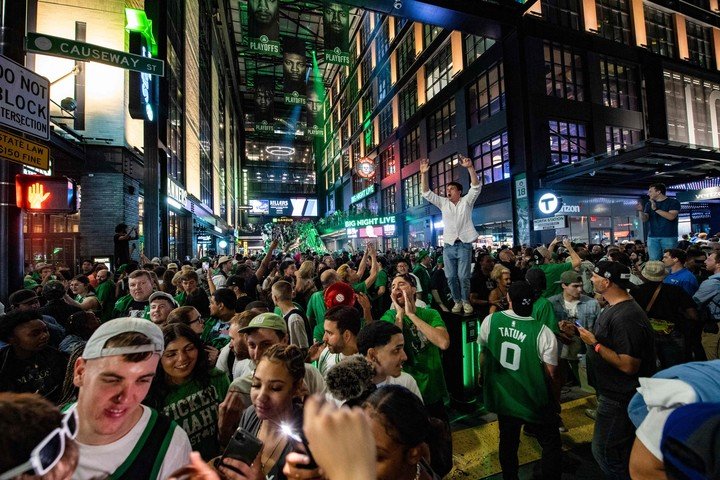 It will be another special night. This Friday, from 22 (Argentine time), the Celtics will receive in Boston the Golden State Warriors with the dream of placing 3-1 in the Finals of the NBA and be only one victory away from his 18th title in the most important basketball league in the world. And there is no more recognizable parquet in the discipline of the orange ball than that of the TD Garden…

His legend was born during World War II. The lack of wood, intended for the construction of military ships, forced the Celtics to put together small pieces of different colors to build their track. That park is NBA history.

The iconic boston park It has been the point in common between the legend built in the 50s and the new ambitions of this already unforgettable 2022. The person responsible for preserving the inestimable value of the history of the Celtics is Richard Johnson (Worcester, Massachusetts, 1955), the director of the Sports Museum of Boston, located inside the TD Garden, where you can admire trophies, historical photos and relics of one of the most traditional franchises in the NBA.

Thanks to the Celtics, Boston is a party. (AFP)

The timber crisis was key

There is no park in the history of basketball more recognizable than that of the Celtics. However, his legend forged over the years originated from a simple necessity. It was installed in the Garden in the early 1940s, during the Second World War, when the United States used large amounts of wood for military purposes, such as for the construction of ships, in order to defend the country.

In that period it was very difficult to find wooden boards of the same color and for that reason the Garden’s parquet was made up of pieces of different colors. “The wood was of good quality, it was just a different color and that became a recognizable element of the team. I can’t think of other teams that have a parquet that is really their ‘particular brand’,” Johnson acknowledged to the Spanish news agency EFE.

This is how Jaylen Brown and the TD Garden parquet shine.

And why did the other teams have parquet floors of the same colour? Boston was not born as the capital of basketball, but became the capital of this sport in the following years, based on legendary triumphs. Other cities in the United States, such as Philadelphia, Chicago or New York, previously had stadiums used by university teams, when that wood crisis did not yet exist.

No wooden planks from the original Garden are used in the current stadium, where the Celtics have played since 1995. Mind you, it stood for four years, until 1999, before being completely remodeled.

However, the franchise honored that tradition and continued to use different colored wood to build its track. The current parquet is third generation, since the NBA introduced a rule that requires teams to renew their track every ten years. “The rule is relatively new and the floor has only been renewed three times. It’s remarkable when you consider that it’s the third in the franchise’s 75-year history,” says Johnson.

This is how it is celebrated in Boston.

NBA Finals: the fourth game is played on the most recognizable parquet in the world