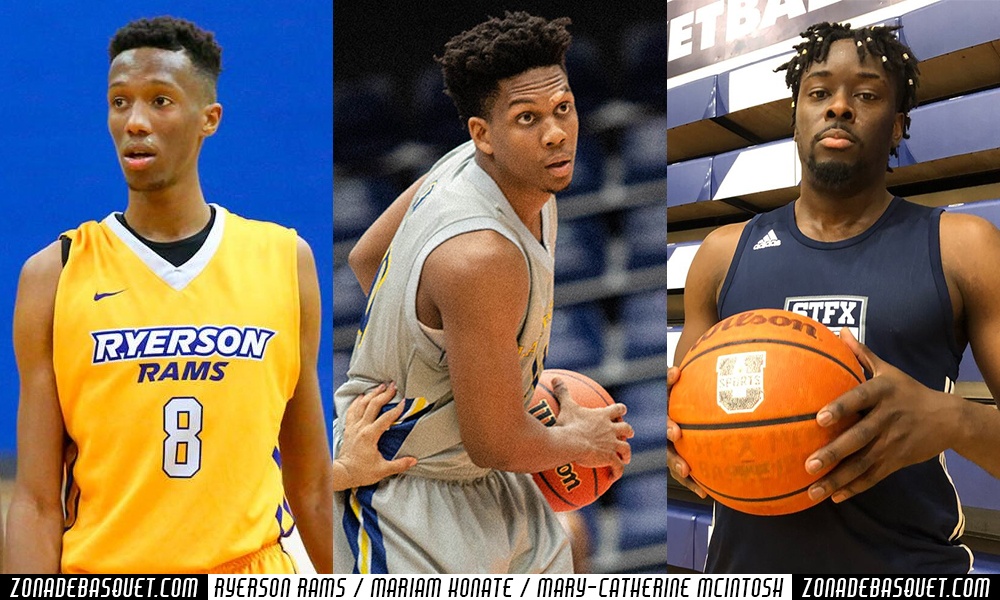 Today in Basketball Zone It is time to analyze the new values ​​that come from the Canadian university basketball (U SPORTS) to the LEB Oro. We are talking about three players whose trajectory, game and possible contribution we analyze in the following lines.

The oldest of the three. Mukama was graduating from Ryerson (16.7 pt, 7.3 re) in the spring of 2019, talking about her profile a few months later. He did not find a starting accommodation and was going to play the Basketball Africa League with the Rwanda Patriots after playing the qualifying phase with them, but the coronavirus stopped the competition and the final phase was not played. In the summer of 2020 he reappeared in the CEBL with the Hamilton Honey Badgers (8 dc, 14.1 pt, 6.3 re) before signing for 20/21 with a low-middle-table team from the Netherlands (Leeuwarden: 30 mi, 10 pt, 7.3 re, and 2.7 as). In June he returned to the CEBL to repeat as a starter in Hamilton.

Few ‘treses’ have the height and size that Mukama treasures, to which he adds an interesting handling of the ball (being able to raise it from his field), a good dribbling and an interesting rebounding ability. Very dangerous from the triple (with or without the ball). A player to sign now, because he will go up whole numbers quickly; if it gains in strength, it will be meat from top leagues.

Last year I followed him thoroughly in the CEBL and we must not get carried away by his numbers in the Netherlands. For me, in Gold it should be more ‘three’, playing with its versatility as a false ‘four’, due to its light body and size. He has a rebound and has a shot of three (despite the measly 20% of 20/21). With good ball handling, he is able to break with feints or make coast to coast after catching the rebound. Knows how to give fluency. It lacks strength and should avoid forcing unnecessary mistakes. My feeling is that he is one of those players who are an unopened melon in Gold: they can break it or finish out.

Jean-Victor Mukama arrives at a Melilla Basketball Club that remains to be seen if it will go to 11 chips. As we say, it is a bet whose result remains to be verified, but Arturo Álvarez has his back covered. On the one hand, he has Thomas de Thaey as a strong ‘four’ and Álex Mazaira as an open ‘four’, while in the ‘three’ Nedim Đedović can act as a marksman (even DJ Fenner). This allows the player of Rwandan origin to acclimatize to the league. In a way it reminds me of an Issa Thiam profile: it will give wingspan, rebounds and a shot of three, but we will have to see how it defends itself against explosive and fast players behind, if it does not lack strength and if it will be tactically prepared for a demanding competition .

Probably a player who has the conditions to carve out a future in our leagues. We are talking about one of the best promises in Canadian college basketball. His four years of playing at Laurentian make it clear why he collected different awards (rookie of the year and twice player of the year). Thus, on 16/17 (24.2 st, 3.7 ace), 17/18 (23.9 st, 6.8 ace), 18/19 (30 st, 6.1 ace) and 19/20 (24.2 st, 6.5 re, 6.5 as) never missed the appointment. University basketball competitions were suspended in Canada last 20/21, we saw the new player from Básquet Coruña with the senior team playing a game against the Virgin Islands (AmeriCup). Chosen in the 2020 Draft of the CEBL, his debut in that competition took place a few weeks ago with the Ottawa BlackJacks, where he has done it at a very good level to be a rookie.

On the net there are good summaries of his game, but I always like to share my notes from his college days with what I have seen in CEBL. I think that in this last year of hiatus he has grown physically. He was a player through whom the entire game of his team passed and on which almost all of Laurentian’s movements were played from the position of CG. Very comfortable in the game of Q&A, being able to reach the rim effectively (in a league without very tall men) or creating play for his teammates, he is also very dangerous in transition. That ability for the 1 × 1, to go out on both sides, is his best virtue and almost all his actions come with the need to have the ball. He has improved his capacity from the triple, being frequent to see him shots of 8 meters without problems, although his mechanics are not fast nor does he have a consistent shot. In the CEBL I have seen details of a gamer, without fear of taking responsibility, but sharing the game. A player who also reads the rebound well and who can raise the ball (he’s not a pure point guard at all), but who still needs to increase his performance in defense.

His cotonou passport makes his player rank even more interesting. However, I was surprised by the arrival, in both directions, of a player with several Gold offers in Coruña. On the one hand, he arrives at a place where he may not have all the prominence that a player of his characteristics needs to progress; on the other, again Sergio García surprises looking for a “very similar” profile to Zach Monaghan, and despite having Álex Hernández and Mo Soluade on the payroll, he may backcourt orange suffers in certain situations (you would have to see the entire squad, yes). Kadre Gray is a combo guard that I see more than ‘two’ than one. Without much size, he is a vertical player, with 1 × 1, skilled at taking fouls and who scores from outside. You must acquire tactical concepts (especially defensive). Get to a place where you will have real quality players who know the league. It can be used as a microwave at set times and grow slowly, but it shouldn’t fall apart if it doesn’t get the participation rate he expects.

The new GBC player arrived on 17/18 at St Francis Xavier, where he had the first two years without prominence until he grew 18/19 and exploited 19/20 (17.5 pt, 13.0 re), without being able to play 20/21 for the suspension of the competition. In a league without many tall men, Roker’s strength has made him a hurdle in the competition with good data. Its 4 × 4 physique and its springs make it an interior with play over the rim. Excellent finisher, mobile in the Q&A and with a game without the ball, he works the offensive rebound very well, runs well in the center lane and knows how to move to both sides at the post. Clearly his lack of inches limits him. Although there are videos of him shooting 3-pointers, he has hardly used them in U SPORTS and it was even rare to see him shoot from 3-5 meters (influenced by his team’s system). In addition, it must be more harsh and severe in blocking and continuation.

The GBC bet is interesting, not because of the player, who has qualities, but because of the composition of the squad. It looks like only one more big ‘five’ will come, leaving Roker as the player to take breaks. The team has a clear idea with Ben Simons and Kyle Mallers in the role of open ‘four’ (without much rebound both) and Xabi Beraza to contribute fight (also short of centimeters), leaving Roker as an inside player. It is clear that the San Sebastian team is going to play running, with intense but mobile defenses and in attack a fast game ending and a lot of triple. The Bahamian can be a good partner for the completions created by the generators of the backcourtHe will give spectacular plays and second options, as well as being able to run, but we will have to see how he performs in a competition with several seven feet. It will do damage with its speed, but as we have already said it falls short of inches. His medium-long range shot is anyone’s guess, as is his reading of the game. Perhaps it is a profile too similar to Beraza (this one with more draft and fewer springs), but until we see the other ‘five’ and what Lolo Encinas proposes we must add little more.