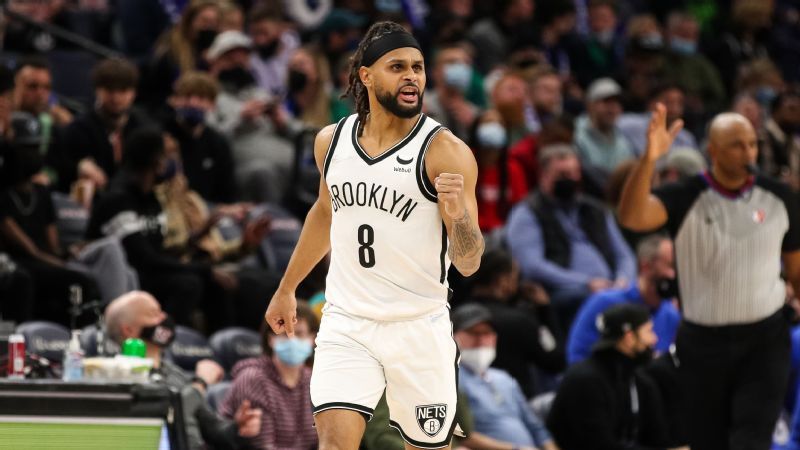 NEW YORK — As the Brooklyn Nets wait for Ben Simmons to recover from a back problem he’s dealing with as he prepares to play in an NBA game again for the first time in nine months, veteran shooting guard Patty Mills remains convinced that Simmons will be able to help the team as soon as he steps on the floor.

“He’s going to be a threat either way,” Mills said after Saturday’s practice. “On the ball or off, whether he’s handling the ball, whether he’s off the ball as a blocker, I think he’s such a threat that he’s going to draw a lot of attention. So I think given his IQ and the way he can pass the ball and handle the ball, that makes us better in its minimum expression.

“So obviously where he is the biggest threat is in an open court situation with people, especially shooters around him. But like I said, a minimum of Ben Simmons also makes this team that much better.”

Simmons, who was acquired in a deal just before the trade deadline that sent James Harden to the Philadelphia 76ers, had hoped he could play Thursday against his old team, but that won’t happen now. Simmons has not yet been cleared to practice and has been dealing with back pain for more than a week.

Nets general manager Sean Marks said in an interview with the YES Network on Thursday that he was hopeful Simmons could rejoin the group late next week, but it remains to be seen when he will be cleared for practice. , and how long it will take from that point to feel comfortable playing a game again.

Mills, who has repeatedly said he wants to help Simmons get comfortable with the Nets’ new system, believes Simmons is learning things from his new teammates, even though he hasn’t been able to practice yet.

“We’re talking a lot,” Mills said. “A lot of conversations, I mean, the group, we watch a lot of video, we do a lot of walkthroughs. So he’s there for everything; he’s there through the whole practice. And then he’s doing his part with his shooting coach and physio, and what whatever it looks like. But when it comes to every single thing on the team, he’s in everything.”

Mills said Simmons is working to make sure he’s feeling good when he’s able to return. Teammates and coaches alike continue to say that Simmons has been mentally sound during his first few weeks with the Nets.

“Obviously, he’s working a lot not only with his back rehab, but also figuring out ways or how he can improve in the situation that he’s in right now,” Mills said. “So I think the biggest thing has been to be able to give him some orientation and perspective, I guess, during the game to be honest and see how easily he can slide into this thing and then see where he can fit in and find his spots.” .

“So playing times have been really crucial, having him on the bench and hearing his perspective as well and what he thinks.”

The Nets got some good news after Saturday’s practice, as the team announced that head coach Steve Nash has approved health and safety protocols and will coach Sunday’s game against the Boston Celtics. Nash missed the last three games while on protocols.