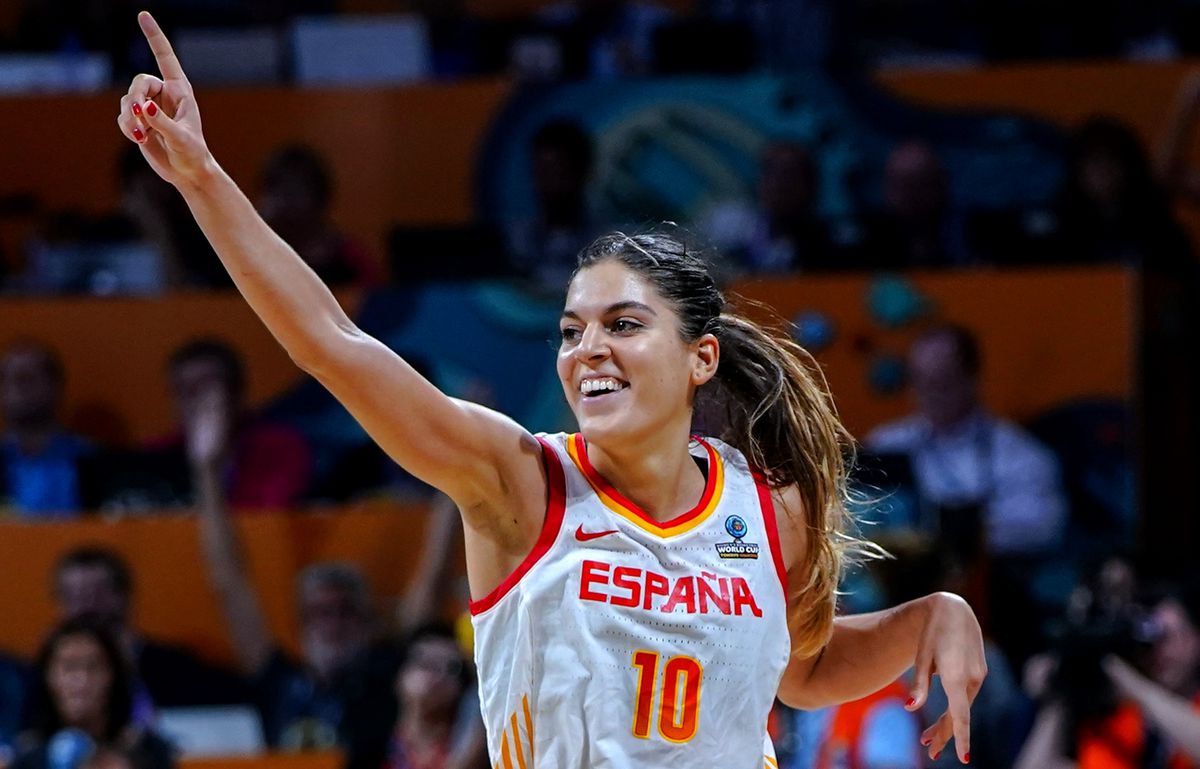 The 15th of July, Marta Xargay (Girona, 30 years old) announced his definitive retirement from active basketball. The full stop that he marked in May of last year to “take a breath” That day became the end point after a time of reflection and personal reconstruction. “Basketball has filled me with life, but all that glitters is not gold,” she said in a statement that was to be accompanied by a detailed confession of the circumstances that prompted her to give up her passion early. “Before the pandemic broke out, it was clear to me that I wanted to leave it after Tokyo 2020. Then, with the postponement, the dilemma of whether or not to miss the Games came and I moved away from the fields to gain perspective. There I discovered that I was already … that mentally I could not take it anymore. He didn’t miss playing. That was the great sign. I was at peace with myself and with my career, ”explained the Girona-born woman in a conversation with EL PAÍS whose publication was postponed on July 15 after a call to the player from the president of the Spanish Basketball Federation (FEB), Jorge Garbajosa.

48 hours after the selection flew to Tokyo for the dispute of the Games, Xargay’s testimony, marked by the consequences of the treatment of the already ex-selector, Lucas Mondelo, was considered by the FEB an impact to be deactivated so as not to alter the concentration of the team during the competition. In his last service as an international, Xargay agreed to keep his confidences for a few more days. Yesterday, the Federation dismissed Mondelo for “not achieving sporting objectives” this summer. The former selector has not responded to calls from EL PAÍS, while FEB, once the details of the interview were known, has given its explanations through a statement (collected at the end of the piece).

This is the inside story of Xargay’s brilliant résumé and his 12 seasons in the elite. With 14 club titles and seven medals in eight championships with the senior team (147 caps). One of the great talents and icons of the best spanish generation of players. The trip that began in the baskets of the Vedruna College (Girona), took flight in Salamanca, passed through Phoenix, Prague and Kursk and made a hole in the encyclopedia of the national team, came to an end. But he had one chapter left to tell in his sports biography.

An album with an early start, a glorious journey and a premature ending. A year ago, Xargay recounted a general boredom and a vital anguish that this time took shape in the confession of the experience that led her to rethink everything definitively. “The moment came when I had to put the person before the athlete. I could not continue putting up with unacceptable things, “he says at the beginning of a story that quickly leads to the figure of Lucas Mondelo. “There are limits that must not be crossed and he took me to a very heavy”, He continues. “It’s hard… I’ve had a lot of problems with food because of this person. It all started in Russia, in my time at Dinamo Kursk [en la temporada 2018-2019, en la que Mondelo entrenaba allí compaginando su puesto con el cargo de seleccionador]. We were weighed every week and he was always behind watching everything. There were several situations, in team rallies, in which he approached Sonja Petrovic and me and told us that we did not have dessert because we were fat. At that time, I weighed 67 kilos, and I am 1.82m tall. I was physically fine, but that made me very insecure, on and off the track. He constantly told me that I was out of weight… This caused a physical and mental revolution in me, ”he details in his testimony.

In the middle of that revolution, Xargay faced the 2019 European Championship between competition and survival, with psychological help, but in silence; with the fundamental support of her partner, Breanna Stewart, but without telling her parents until later. “Mentally I was out. But at the end it was a liberation. That’s it, I thought. I don’t have to put up with this anymore when I’ve given everything without creating problems, when I’ve always done what I’ve been asked. I don’t know if he is aware of everything he has caused me ”, he emphasizes. In an extraordinary exercise of dissociation, Xargay won gold with Spain, was the top scorer in the final against France, the second that played the most minutes in the tournament, and was chosen in the ideal five of the championship. Resilience, has tattooed on his left arm. “I don’t know where I got the strength from. It was a: I am bigger than you, I will be able to with you. I was passionate about playing and I wanted another medal ”.

Behind the glory, months of personal ordeal. “I felt bad for eating, even if it was a salad… I didn’t enjoy the food, I would eat anxiously and then I would go to the bathroom… My psychologist would not let me weigh myself and in concentration with the selection I followed that control. It made me very anxious. When I knew that they had to weigh us the next morning, at night I did not sleep ”, he recalls. The medical diagnosis: bulimia and orthorexia (obsession with healthy food). “I could spend two hours in the supermarket looking at the components of all the products,” he says. “I lost my sense of reality, of what I was like physically. Whether she was fat or not. Whether he ate well or not. Now I love and accept myself again, but there comes a point that that gets into your head. Even today, when I no longer do nonsense with food, I feel that this has left its mark and it will be with me all my life. The thought returns in a recurrent way and the social pressure with the ideal woman prototypes does not stop promoting it ”, he points out.

Xargay’s then-temporary withdrawal a year ago was the first of three notable departures that decapitalized the historic pool of internationals of seven consecutive medals between 2013 and 2019. In January, Anna Cruz announced her goodbye to the national team with harsh reproaches towards Lucas Mondelo. “The family is not treated like that. It is very difficult for me to deal with certain things that do not fit with the professionalism of this sport: respect and dignity towards some professionals who have a successful career behind them, ”said Cruz. In May, Laura Nicholls resigned from the Eurobasket and the Games for personal reasons. “The time has come to stop putting basketball before my own life,” said the Cantabrian center. The concern of the former selector before such a sequence of resignations was to separate the cases in their few explanations, but Xargay’s confession affects the complaints made by Cruz.

“He has failed to control his authority. At no time has he respected me, neither as a player nor as a person. He has had many comments, public and private, attacking me and getting to value my private life and my relationships, ”emphasizes Xargay, who, beyond his case, speaks of generalized disrespect and disrespect from Mondelo, with whom he agreed recurrent form, from the U19 team in its beginnings to the end of its career. “Going to the national team was always like going to camps and the fact of arriving and seeing that that summer camp had turned into something else was very hard,” he completes.

But, after rebuilding, Xargay has achieved peace and balance. “I don’t want to be remembered for this. I want people to stay with the player, with everything I showed on the court ”, he asks, putting before his confession the“ desire to help more than to report ”, he emphasizes. “I tell it because I think I can help many girls who are going through the same thing. So they know that it can happen to anyone, that athletes are not invulnerable, but that it can be overcome. I had it all and I have suffered it. Now I count it out of responsibility. And hopefully it also helps the teammates, to be more people than players within a team. One thing is the requirement and another is to go beyond the limits ”, adds Xargay. His last basket was scored with the Phoenix Mercury in the training camp of the WNBA (the American women’s league) in May. “It was a way of saying goodbye to one of the best places I’ve been, remembering one of the best experiences I’ve had,” he reviews in a final balance turned into a declaration of love for his sport. “Basketball has been my passion and my everything. I have been fortunate to live everything I have lived. Being there and winning so much is very difficult and I have been able to do it. To be able to play in the WNBA, win an Olympic silver. I keep those memories of Rio, with the Euroleague in Salamanca, with my second year in Prague … with that triple in the bronze match against Belgium in the 2018 World Cup, with the last gold … with how we have always surpassed ourselves, with my return to Girona last year to be close to the family. I stay in peace and with a smile ”, he closes.

Anna Cruz: “We could have treated the person better”

The day Marta Xargay announced her temporary withdrawal from the slopes, Lucas Mondelo ended her statement with a kind message on her Twitter account. “Like anyone, Xargay needs a timeout. It has been a pleasure to enjoy the work and the successes with you. You continue to be a reference and part of the family ”. Instantly, Anna Cruz came out with a forceful message in defense of her partner: “The rally on social networks makes me gag. Instead of so much tweet, we could have treated the person better when we had them by our side, instead of trying to be a welcome publicly ”. Two tweets that now acquire a special relevance. But the message that Xargay wants to prevail in his farewell is that of gratitude to his profession and his passion.