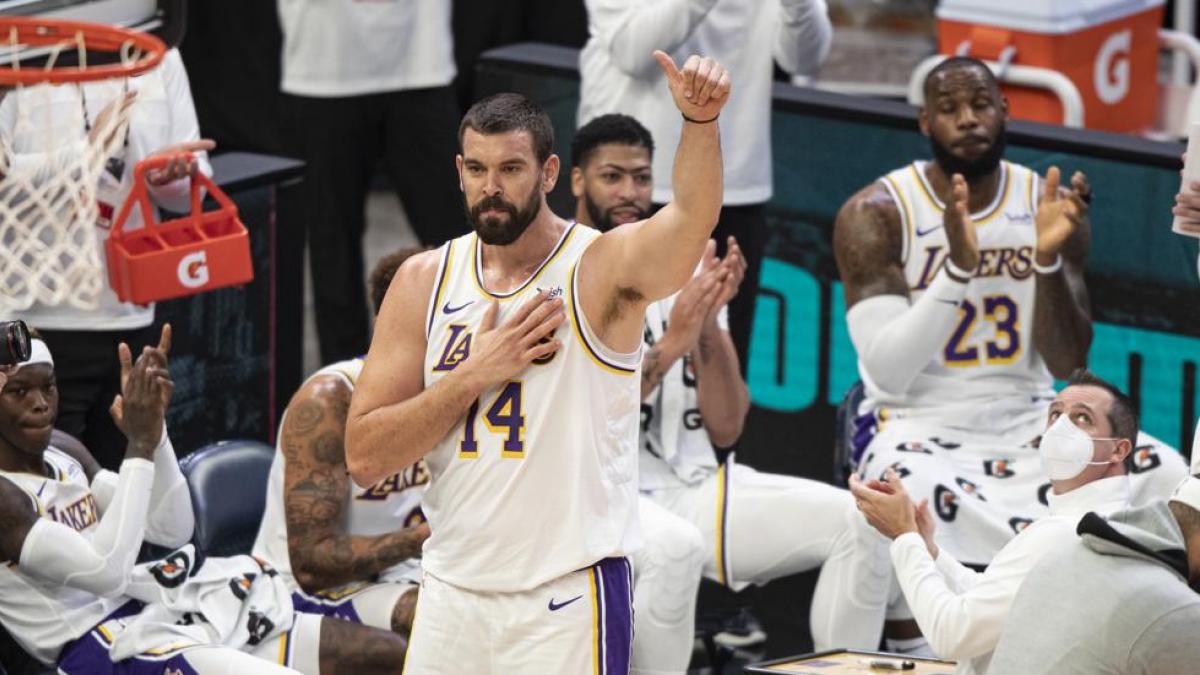 Marc Gasol wants to enjoy playing again, and for him that happens by feeling connected to a project that transcends the limits of sport and basketball. In Girona it feels like home, and wants to give back to the city everything that was given to him at the beginning of his career in the elite.

“I want to be a reference for the kids of the club, to make all the youth teams of the first team grow, also those in wheelchairs and 3×3, to promote unity. If we succeed, we can achieve other goals “He explained this Thursday in his presentation in Fontajau.

That absolute connection between player, fans, quarry and city, that local identity that Marc draws on, it did not happen in Los Angeles, where he spent a difficult season with the Lakers because of the pandemic and poor team performance.

Last night, during his presentation, the Gasol middleweight did not want to delve too deeply into the wound. “In the Lakers I had a good experience, I learned a lot, even if it did not have the expected result. Catching the Covid in March conditioned me, “he said.

That bad year in LA was Marc’s last in the NBA, where He went from being known as “Pau’s brother” to making a name for himself as one of the most important players in the history of the Memphis Grizzlies, a franchise and a city that owes its best years to the Gasol saga.

In Memphis, representing a small market – by US standards – and in Toronto, where defended a project that mobilized an entire country, the center of Sant Boi became one of the best defensive specialists in the competition and one of the most respected players for his bearing and spirit on and off the pitch.

In 13 years of experience in the American league, Marc has accumulated contrasting star honors. First, the ring with the Toronto Raptors in 2019, the icing on the cake to a career battling to lead the Grizzlies to higher heights. The transfer to the Canadian team, where he formed a tandem in the inner game with his compatriot Serge IbakaIt was a unique opportunity that he knew how to make the most of.

Marc’s book of merits in the NBA started early, as soon as he landed in the competition. In his first season with Memphis he finished in the ideal rookie quintet. And since its debut, the team has been climbing positions in the table year after year. In 11 seasons, the Catalan pivot collaborated with the team to accumulate 7 trips to the playoffs and surpass heights that not even his brother Pau had reached.

The grizzlies made it to a Western conference finals in 2013, and in Marc’s third season they had already surpassed the previous top of the franchise with an adventure until the conference semifinals.

In the individual section, Marc won in the 2012-2013 season the award for Best Defender of the Year in the NBA, becoming the first European player to lift the trophy. There were more recognitions for him, such as his presence in the best quintet in the league in 2015, a fact never repeated in the history of the Grizzlies and that Pau has not achieved either.

Total, Marc was selected for the All Star three times and left, together with his brother Pau, the only initial jump between two brothers in a match of the stars and in a unique setting, New York’s Madison Square Garden.

Gasol’s averages in his 13 NBA seasons are 14 points, 7.4 rebounds, 3.4 assists and 1.4 blocks per game in 891 games played, numbers that make him the top rebounder and blocker in the history of the Grizzlies and the second top scorer in the franchise.

“What Marc has done goes beyond basketball”

Although reserved and stubborn in equal parts, a player with a lot of character for good and bad, most ex-teammates and coaches rave about towards the figure of Marc. His impact in Memphis will surely lead him to see his jersey removed from the ceiling of the franchise pavilion.

“What Marc has done for this organization goes beyond basketball”, explained Robert Pera, owner of the Grizzlies, when the player was traded to the Raptors. “He has been part of the hard core of players who has built the identity of this franchise on and off the track. I want to thank you for your blood, sweat and dedication to the Grizzlies and the city of Memphis. His impact will last and I look forward to seeing his shirt and ’33’ hanging from the ceiling at the FedEx Forum. “

Dave Joerger, one of the former coaches who demanded the most of him and with whom he had more than one anger, thus remembered Marc in a piece of the ESPN in 2019: “Marc is great. One of the best friends and teammates I have ever coached. Those with talent will push you to do your best, because his talent requires it. “

In an interview with Mundo Deportivo, Marc pointed out last night that there was interest from several NBA franchises to play him back, something that he did not seriously consider:

“The interest and attention from the NBA teams has been constant and also Euroleague teams have asked about my situation. But that step of evaluating or thinking about it has not been reached, I have always thought about living this, which is what best fits in my day to day, in my vital structure “.

Off the slopes, Marc has stood out as an athlete very committed to social work. Together with his brother Pau he has promoted the Gasol Foundation, that promotes healthy eating habits among the youngest, and has participated in first person in rescues from the NGO Open Arms in the Mediterranean.

His most personal project, the Bàsquet Girona which he founded in 2014 and took over from the disappeared Akasvayu as a benchmark for grassroots basketball in the city, is the one that will now occupy him more hours … as president and player, an unusual double more typical of amateur categories.

“It is a different, difficult challenge that I really want to do”, assured Marc in his presentation with Girona.