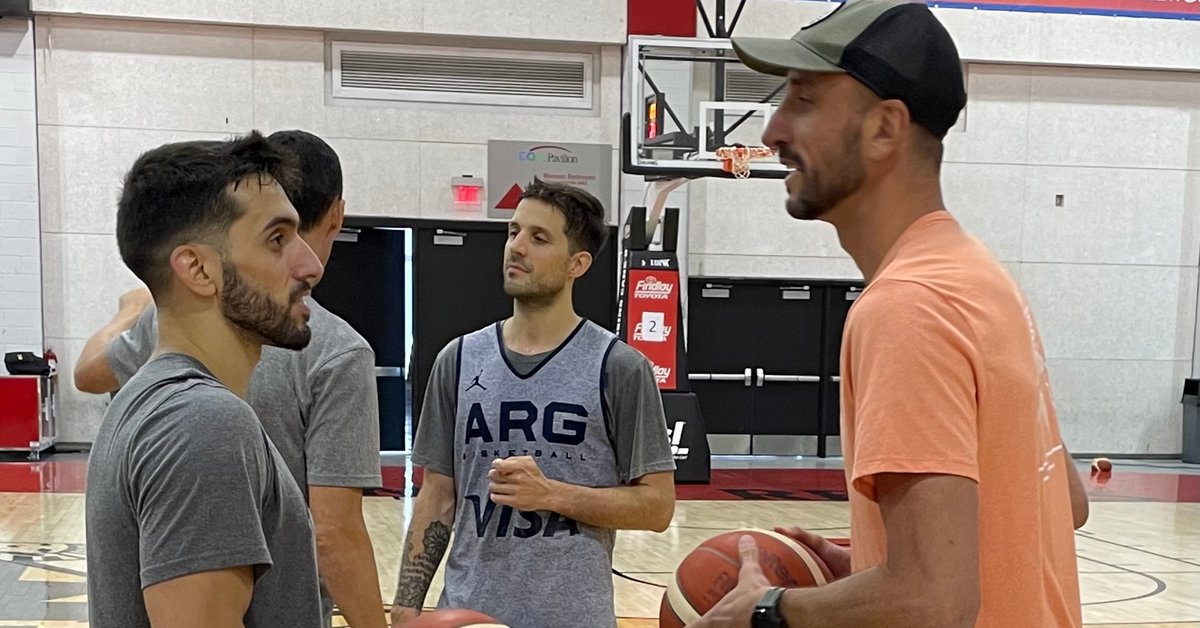 The selection Argentina from basketball he had a mobilizing visit and unexpected: Manu Ginobili He approached to the concentration and then participated in the last training that this Thursday the team of the Sheep Hernández ahead of the Tokyo 2020 Olympic Games. The greatest exponent of the Golden Generation had presented the day before, almost without warning, at the hotel where the Selection is concentrated in this Olympic preview in Las Vegas.

Low profile, he was in the Argentine dining room and chatted with Sergio Hernández and Players. Even, in his own way, threw some tips indirectly. Like Leandro Bolmaro, whom he told not to worry if he noticed differences with the NBA today -Argentina lost solidly 108-80 against the United States on Tuesday. In addition, in that city, he faced Nigeria (defeat 94-71) and Australia (adjusted fall 87-84). “I, in the first tournament I played -Prelympic 99-, they ran me back and forth like a doll”, He told who possibly in a few months will be the new Argentine in the NBA. Thus, always with simplicity and good vibes, he chatted with all those who were there, the same Manu being curious and interested as always.

This Thursday, with the presence of his friend Adrián Paenza, showed up early at the Cox Pavilion, while the players were in the gym. When the players came out onto the court, they went little by little to greet him while he was chatting with Sheep. Around a stretcher a conclave was assembled in which Luis Scola participated. The captain had been accompanied by two of his four sons, Tiago and Tomás, who quickly began to chat with the idol. “I want to see your shooting mechanics,” she said to the minor, who stood up and nailed her with three points. “Very good, huh,” Manu told him.

Then, together with Paenza, he followed the whole practice with great attention and, when it finished, without wanting to disturb, timidly approached some players. Facu Campazzo came to meet him and they chatted for a while before taking the funny group photo by Prensa CAB. “There is not much to say, I like to come see them, be close …”, said Gino, who retired from basketball three years ago and five years ago, precisely in the previous Olympic Game, of the National Team.

“Manu’s visit was very nice. We haven’t seen him for a long time and his presence always brings good energy, good vibes … He adds a lot to us as a group. In addition, we are all very grateful to him for what he means as an athlete and person, someone who has transcended our sport and always comes back as one more. I was occasionally talking about basketball because he always wants to know how the team is doing and each one of us, especially the newest ones. And of course we also chatted a little about other things in life ”, revealed the base of the National Team that is preparing for the debut in Tokyo, on the 26th of this year against Slovenia (last classified). Meanwhile, three days later, Argentina will face Spain (9 am Argentine time), while it will close its participation in the group on Sunday, August 1 (1:40) against Japan.

Later, own Facundo Campazzo was part of the virtual conference organized by the Argentine Basketball Confederation (CAB) from Las Vegas and acknowledged that although he will participate in his third Olympic Game, “This will be a new experience” for him, since due to the experience accumulated in his first season in the NBA, his role in the Argentine team will be different. “Personally, this Tokyo will be a new experience for me, because although it will be my third Olympic Game, I will have a different role in the team compared to the previous two”, the Cordovan pointed out. “And the truth is that I am very anxious at the moment, but simultaneously also thinking of enjoying everything when I have to play,” said the current Denver Nuggets player of the NBA.

Campazzo was already in London 2012 and Rio de Janeiro 2016, and comes from an outstanding performance at the 2019 World Cup in China, where Argentina was runner-up by falling 95-75 in the final played against Spain. “What we have to do in this competition is to try to start beating Slovenia, but if we can’t, we have to turn the page quickly to be able to face the next matches without feeling that there is a brake on progress due to a setback”, warned. After his brilliant time in European basketball at Real Madrid, Campazzo, who turned 30 on March 23, had the long-awaited time to play in the NBA, where in his first year he had a satisfactory performance in the Nuggets, playing even the last stretch of the Denver team’s participation as a starting point guard.

That is why with that baggage of experience on top and his role in the group led by Sergio Sheep Hernández will be different from the one who fit him in previous competitions, when, for example, Luis Scola, who will once again be his partner, was one of his main advisers. “At this moment I am here to contribute more to the team from what has happened in recent times than what happened before, but in different aspects that go beyond becoming an advisor to someone in particular ”, he argued. “And then, although the World Cup in China was just two years ago, and it was very important, we should not stop at that only as a basis for what we will face now, but rather face these Olympic Games with the current conditions in which the team is in in terms of preparation and level ”, he pointed out.

Within that “enjoyment” that the former Peñarol, from Mar del Plata, of 1.79 meters, was talking about, is “the fact of meeting as many athletes as possible in the Olympic Village and also going to see all the competitions that can be ”. However, on this point he regretted “that there is no public, because in the previous Games, seeing how people moved and filled the places where the different competitions were held was very emotional.”

The unknown friendship story between Sergio Hernández and Gregg Popovich, the historic coach of the San Antonio Spurs
Spectacular Antetokounmpo cap that drove the NBA crazy: Milwaukee Bucks tied the Finals against the Suns
A former German athlete revealed details of sex parties during the Olympics: “Sometimes you could barely sleep”

With information from CAB and Télam.