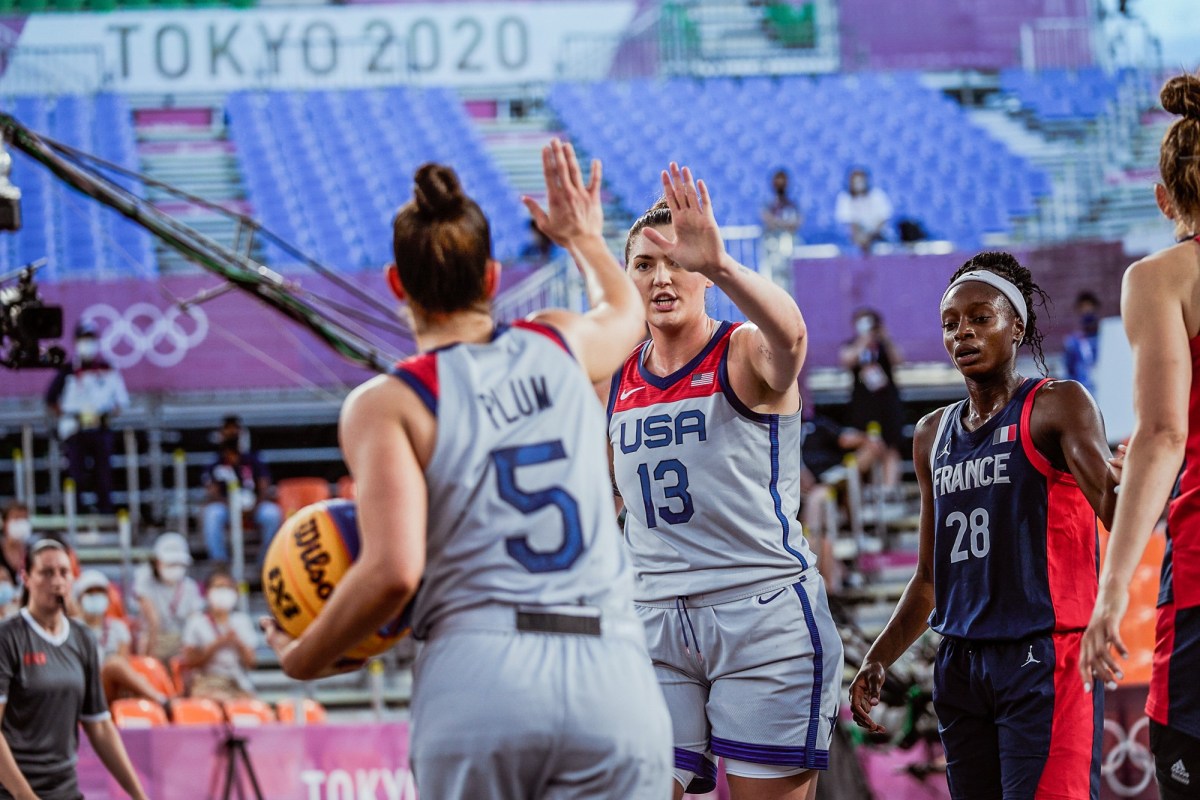 Basketball made its first appearance in Tokyo with the 3 × 3 modality, starting with the female branch. Eight games were played, in which the two victories of Russia and the two of the United States can be highlighted. The Chinese team, who come from being champions of the 2019 World Cup, had a victory and a defeat.

The first match was between Japan and Russia, with the latter winning by 21 to 18. Olga Frolinka, considered one of the best players in the world, was the one who scored the first points in the history of the Olympic Games in the 3 × 3 mode . Regarding the development of the match, the Russian team started better, seeking to control the match from the defense, which allowed them to take a quick advantage of 8 points. Although the Japanese managed to get within 2 points with one minute remaining, it was not enough for them to achieve victory. Mio Shinozaki and Olga Frolinka, with 8 and 7 points, were the scorers for their respective teams.

The second was between China and Romania, with a comfortable victory for the Asians by 21 to 10. The result with four minutes remaining was 14 to 10 in favor of the Chinese. From there, Romania was totally dominated and could not score again. In this way, the Chinese team (2019 World Cup champions) achieved their first victory in the tournament.

The next one faced Russia and China, which ended with a victory for the Russians by 19 to 9. The match began with a quick 8 to 2 partial in favor of the Russian team, led by an uncontrollable Olga Frolinka. From there, they were able to control the game and win.

The fourth game had Japan and Romania as protagonists, with the Japanese victory by 20 to 8. The local team began the match with a partial of 8 to 1, which was definitive to give them their first victory in the tournament.

The fifth meeting of the day was between Italy and Mongolia, with a tight victory for the Europeans by 15 to 14. The strength of the Italian team was in the control of rebounds, which allowed them to finish the game with 16 offensive rebounds. While Mongolia had a chance to win the match in the last second, the winning shot did not want to enter. The Italian Raelin D Alie was the top scorer of the match with 8 points, although her percentage in the 2-point shot was only 10% effective.

The sixth of the day was between the United States and France, with the North Americans winning by 17 to 10. The start of the game was slow and even, with a score of 9 to 8 (in favor of the United States) with four minutes to go. From then on, the game was all for the North Americans, who, led by Kelsey Plum and Stefanie Dolson, achieved an overwhelming 8-2 to get their first win in Tokyo.

The seventh game saw another victory for the United States, this time 21-9 against Mongolia. The North American team started mercilessly, with a quick 13-2 run. The Mongolian players tried to react, but were unsuccessful. This time, the one who led the United States team was Allisha Gray, who finished the match with 9 points.

The eighth and last match of the day was played between Italy and France, with the latter winning by 19 to 16. Although the Italians entered very well in attack, achieving a partial of 7 to 2 at the beginning, they were charged with fouls too fast. The latter was taken advantage of by the French, who, with the help of Laetitia Guapo and Mamignan Touré, managed to reverse the result.

It is worth remembering that the group stage only serves to accommodate placements facing the kill-kill. The eight teams qualify for the quarterfinals and depending on the locations, the crosses will be given.