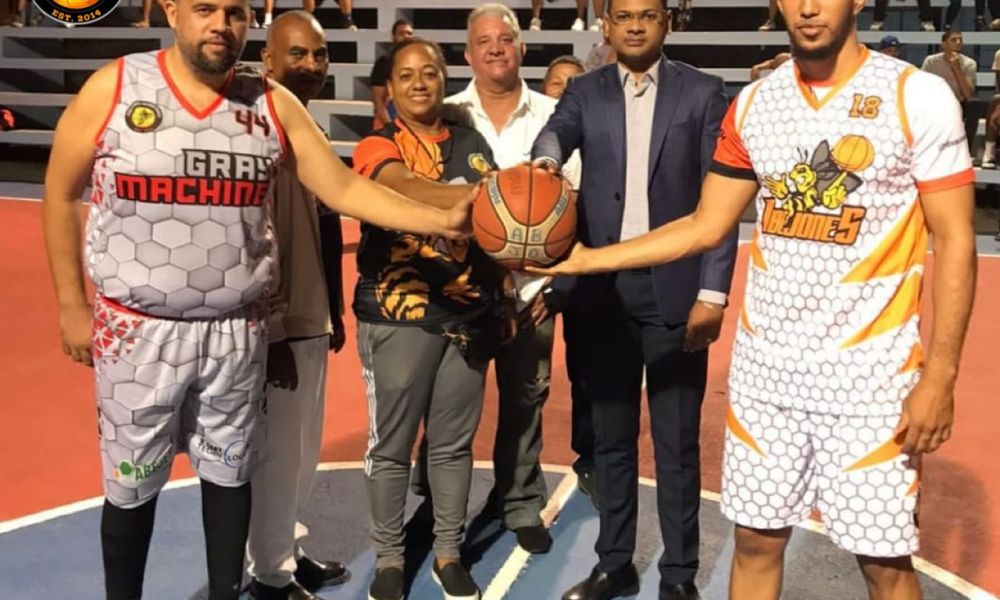 Edward García takes the honorary kick-off at the opening of the internal tournament of the Abejones Basketball club in its second version. External source.

In the first of the doubleheader Gray Machine beat Pure White 83-82 with an outstanding performance by star Danny Alvarez with 25 points who was followed by Billy Santana with 18 and Jhogeidy González with 13.

For the defeated the most outstanding were Edward García (El Koreano) with 26 points, Fidel Alvarez with 22 and Genesis Durán contributed 14.

In another result, the Orange Nation quintet defeated the Trie Black 81-75 in a very close match from the beginning to the end.

Yancarlos Liberato (Yan) led the winning team’s offense with 21 points, being escorted by Abel Romero with 19 and Misael Taveras with 16.

For those defeated, the most outstanding were Andreulis Vásquez with 29 points, Joel García contributed 19 and Starlin Sánchez with 12.

The prestigious doctor Juan Miguel Sánchez and Dr. Edward García Del Orbe spoke at the event, while the sports oath was made by the outstanding athlete Edward García.

The kick-off was performed by businessman Eduardo Rosa from the Agua Rosa company and Dr. Edward García Del Orbe, who were accompanied by former athlete Pablo Mena and Deyanira Santos from the Abejones Basketball Club.